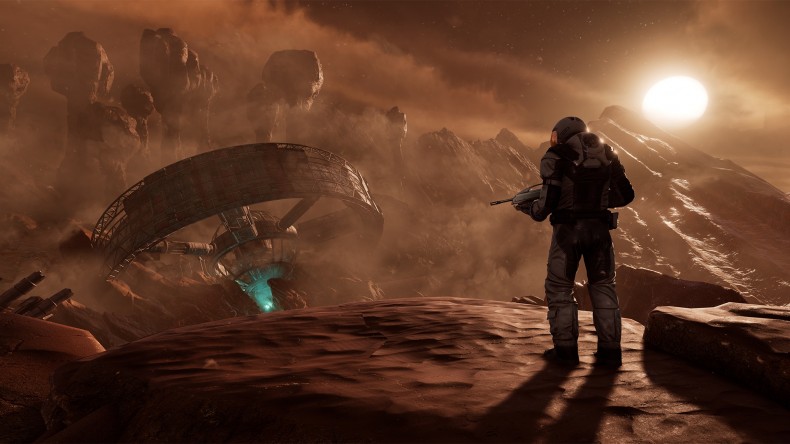 One of the things about VR that can make an experience go very wrong, is if it takes itself too seriously. I’m not for one moment suggesting that a VR game can’t be moving, or emotionally connectwith you, but when there’s a (what feels like) ten minute setup that means you’re just sat watching things happen, I can’t help but feel like Farpoint is missing the…well, point. This is a game that can be purchased with a plastic gun that you actually hold and “pew-pew-pew” shoot at the screen, but it’s one that makes you watch exposition rather than shoot things.

Anyway, if you’re an eighties kid (they’re the best, so I hope you are), there will almost definitely have been a point where you held a tennis racket in front of a mirror and rocked out. Then you probably turned it around and pretended it was a gun. The Farpoint “Aim” controller is that gun, in 2017, with VR. It’s weird, yet somehow very cool at the same time. Unfortunately, like almost any game that uses Move in some way, it’s jittery: if you stare at the gun, it moves, even if you’re still. This isn’t a game-breaker, but it’s a continued worry with PSVR, or more specifically, games that use Move. But that’s neither here not there, because Farpoint does let you play with a controller. The main problem with this particular PSVR experience is that it’s just a bit boring. The visuals are muddy and blurry, and after three levels of walking in a straight line (for the most part) from an open desert-y area to a cave-y place, then outside again, it’s just not very appealing to look at. Likewise, the enemies aren’t exactly inspiring, and despite its best efforts to channel Starship Troopers with arachnids bouncing at your face (okay, I admit it, the first one made me jump), you quickly grow tired of shooting them.

The shooting is fun, at least. You’ll need a fair bit of space to play as it’s best experienced standing up (you can sit down if you set your height at the smallest the options allow), and seeing your virtual shadow cast from the blistering heat above you is a nice touch. As you collect new weapons (you start with an automatic rifle, then get a shotgun, sniper rifle, etc) you can switch between them by quickly popping your gun over your shoulder, and I found myself squinting and looking down the sights with one eye as thought I were in a real space battle with spiders and flying robot drones. There’s plenty of options to control motion sickness, too, so if you find yourself going green, look in the options menu and change it up. Each weapon has a secondary fire mode, which uses ammo that runs out. Normally your gun will fire before it needs reloading or cooling down (ammo, though, is infinite), but this secondary ammo is the “overpowered” type: rocket launcher, etc. The thing is, this isn’t a hard game, only offering challenge with the sheer number of enemies thrown at you when it’s clear you’ve found your feet. Most enemies have an “easy” way to kill them, too. For example, the first spider enemy will jump at you, but if you hold your machine gun or shotgun up by your face and fire as they jump, they will jump to an explosive firey death.

In-between the killing, then, there’s a story to be told. You’re the guy who’s supposed to be rescuing two doctors (one who is called Dr Moon, but it’s okay because it’s remarked in-game that it’s ironic), and using your scanner on memory echoes will reveal parts of the story. After each level you sit in on a longer conversational part of the narrative, which for some reason switches between you being a weird floating head who just happens to be observing proceedings, and at other times puts you in the body of one of these characters.

Elsewhere, you can take a run at the levels to get the best scores, and there’s a co-op mode which is actually quite cool, offering another way to play, as you can genuinely work as a team, even helping your friend back up from a “down but not out” situation. The trouble is, while nothing about Farpoint is bad, per say, most of what’s on offer is sub-par compared to other VR experiences that are doing the same thing. While the faces of the characters are one of the standout parts of the storytelling, this isn’t a high point of narrative excellence in VR, nor is it the best available first-person-VR shooter out there. Sure, there’s not a plethora of them on PS4/PSVR, but that doesn’t mean it should get a free ride.

Putting you in control of a gun in a virtual world should be exhilarating. No, in fact, VR in general should be mind-blowing. This is the thing we dreamed of: actually being in a game. Whether you’re inhabiting a universe you love like Rick & Morty, solving puzzles in SUPERHOT VR, or maybe even just shooting the shit out of things at a frenetic pace in Robo Recall, it should always “wow” you.

Adding a plastic gun doesn’t make you feel like you’re shooting a real gun any more than the Rift’s touch controllers does, but it’s a nice idea, and Farpoint isn’t bad, it just didn’t inspire me. To PSVR players who have never experienced anything like it, it will almost certainly resonate better than it did for me. Farpoint is decent, for sure, but know that there are better games out there in the VR world.

Shooting is fun
Co-op is good

Not great looking
A bit boring in places

Farpoint isn't bad, and to PSVR players who've never experienced anything like it, it may resonate harder. But know that there's far better out there in the same space.