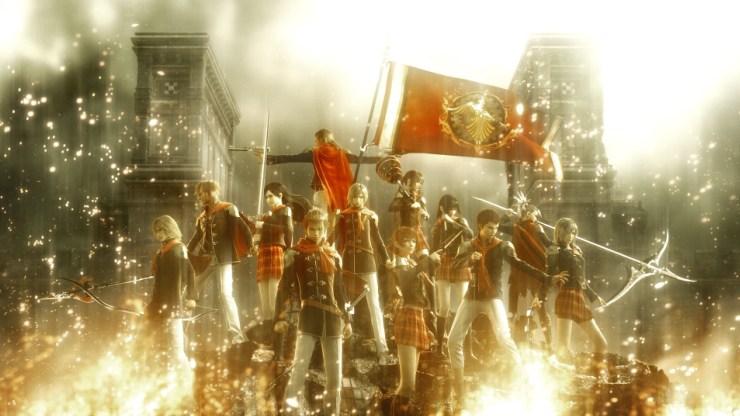 As a series, Final Fantasy has never been one for simple, uncluttered storytelling. The histories, religions and cultures of the various worlds within its over-arching, often disparate universe are deep, complex, interlinked and sprawling, sharing some elements and bastardising others, while ignoring some established rules altogether. It’s a deceptive complexity, though, and one that distracts from the fact that once you get down to it, most Final Fantasy games are simple tales of good versus evil. Muddied by endless exposition, middle-of-the-road anti-heroes, and characterisation that’s so blatantly, painfully full of cliché that it goes out the other end of annoying and becomes somehow endearing, Final Fantasy is notoriously hard to understand for newcomers.

Type-0 (originally released on the PSP in 2011) is no less confusing. It throws a torrent of nonsensical nouns at you in the first few minutes, bombarding you with heavy-handed exposition about a war between the four “Crystal States” of Orience. Taking place in the same canon as Final Fantasy XIII, Type-0’s story is equally as deep and contrived as Lightning’s. At first it’s difficult to get your head around the good guys and bad guys, as the evil Militesi Empire wages war on Rubrum, Lorica, and Concordia for control of their Crystals. At the centre of it all is Class Zero, an elite group of fighters trained in the fortress-like academy of Akadaemia (seriously), who find themselves caught between the four factions and the powerful l’Cie who protect the Crystals. It’s the usual Final Fantasy madness that drives the narrative, as the protagonists are essentially highly-trained teenagers with all the whiny, adolescent angst that Japanese developers believe all teenagers exhibit at all times. They have characters that talk weird, because that’s how they believe personality should be defined, like the guy who says “yo” at the end of every other sentence, or Rem, who talks like she’s been translated by a drunk. It’s the same black and white personality that always undermines the otherwise stellar plotting in any Final Fantasy game, but at least here it’s off-set by a genuinely interesting story.

Opening with a surprisingly brutal FMV, Type-0 takes aim at that M-rating and blows its goddamn head off in the first few minutes with a powerful, thrilling gambit. Class Zero are revealed as the badasses they are, before you’re handed the reins of fourteen characters right from the beginning. The beauty is in their diversity; they might be clichéd characters for the most part, but at least they’re not totally interchangeable. The main four are card-slinging Ace, sword-wielding Queen, and the two new recruits Machina and Rem, whose entwined destinies drive the main plot and ultimately lead to the storming climax.

With a story that rewards your investment but seems hell-bent on preventing it, Type-O is fortunate to have a framework of such great gameplay. As Class Zero (all of them), you’ll spend lots of your time in Akadaemia, a huge academy that teaches its pupils to fight and wield magic. Under the tutelage of the icy Kurasame and the decidedly sinister Dr. Arecia – who they refer to as “Mother” – Class Zero are sent on regular missions into dangerous war-zones to help turn the tide of battle, but in the meantime are free to embark on side-quests or run around solving everyone else’s problems. Missions are separated by set periods of time. Every mini-objective you complete (by approaching NPCs with green exclamation marks above their heads) uses up two hours of time, going outside the academy will drain six hours and attempting elite special tasks will take up an entire twelve. Once you reach mission day, you report to Kurasame and head off on the mission. During the early part of the game this formula will serve you well, as will using the teleporter to hop around the various areas of the academy like the armory, where you can buy and equip gear, and the Chocobo Ranch, where you can breed your own feathery mounts. The pace is slow, however, and any time you’re not on a mission you’ll need to constantly run around looking for interesting ways to pass the time, which, in Akadaemia, are slim on the ground. Talking to NPCs yields story tidbits and amusing distractions, but it’s not exactly thrill-a-minute.

Stepping outside onto the world map can be dangerous, but it’s where the adventure lies. Jumping on your chocobo to sprint around the scaled-down world is idling, even if the oddly barren landscapes are a little unfriendly. Random encounters can occur, but when they do the combat is free-form, not turn-based. In fact, it’s similar to Crisis Core, which is no bad thing, and sees you flitting between characters at will. Even if one falls, you can simply bring in a replacement from among the rest of Class Zero and carry on – but you’ll need to return to a safe zone to resurrect people.

The massively diverse pool of characters keeps Type-0’s combat fresh and exciting, and easily singles it out as the best element in the game. A mix of melee and ranged characters and all the usual Firagas and Curagas we’ve come to know and expect mean you can mix and match any combination of three fighters to maximise your tactical advantage. Have a ranged fighter equipped with healing magic, another with a decent buff, and you can whip around the battlefield in control of a melee character doling out damage. Add in natural affinities between certain trios, Eidolons like Ifrit, Shiva and Odin, and powerful “Triad” attacks and you’ve got a recipe for some insane fisticuffs – and that’s before you factor in “breaksight” and “killsight” moves, which require perfect timing to pull off instant kills or evasions. The combat is immediate and often thrilling, and despite an iffy camera and occasionally-spongy target lock, it’s never less than a joy. It can be chaotic, and when your AI party members are spamming Thundagas and Blizzards all over the place, it becomes incredibly frenetic, but it’s a wonderfully cathartic feeling when the word “VICTORY” pops up after a particularly grueling ruck – especially as occasional difficulty spikes will challenge your skills and patience. Sadly, they sometimes necessitate a bit of grinding, which is never good, but a built-in arena is a good place to earn fast XP. It’s worth noting, too, that the HD remaster comes with a new, lower difficulty level after the original release was deemed too punishing.

And that’s not the only change. The ad-hoc multiplayer has been removed, with certain skills like the Triad Attacks incorporated into the solo game. Additionally, there are unlockable costumes for the otherwise blandly-dressed teenie warriors and (quite obviously) the graphics have been overhauled. The change is most noticeable during the dialogue scenes, which employ the genre-standard over-the-shoulder point of view. The colours are much brighter and better defined, the animations smoother and the level of detail dialed right up. It’s less impressive out in the world because you’re simply seeing a new skin on flat textures. The details and texturing in the environments is mostly poor, especially when in the larger world map that looks mostly awful. It’s bland, empty and uninspiring. Certain things should have been omitted and weren’t, like an awful, dizzying camera blur when you spin the viewpoint around that makes navigation a nauseating chore, or an ill-advised, terribly-executed quasi-RTS mission type that sees you running around the ugly world map with some stiffly animated soldiers, attacking enemy troops and towns. These missions are imprecise, ineffective, don’t adequately explain their rules or purpose and really should have been left out. If anything shows Type-0 up as a remastered PSP title, it’s these.

Ultimately, though, the package comes together and manages to entertain enough to be recommended. It’s not a great entry point for newcomers, but it is an excellent prospect for admirers of the original, or Final Fantasy fans who never owned a PSP. Once you dig through the reams of exposition, the story is great, and watching it unfold is thrilling and, at times, genuinely moving – and the mature tone suits the series far better than you might expect. It’s not the HD remaster to end them all, but it does enough to make a four-year-old PSP game feel mostly current, and the combat is utterly brilliant. It’s just a shame that Square Enix didn’t do more with the aesthetics, back-story and plodding pace.

A decent enough remaster that won't entice newcomers, but makes for a tasty treat for established fans.