previous
Final Fantasy Type-0 HD Review
random
next
The Evil Within: The Assignment Review
1 like 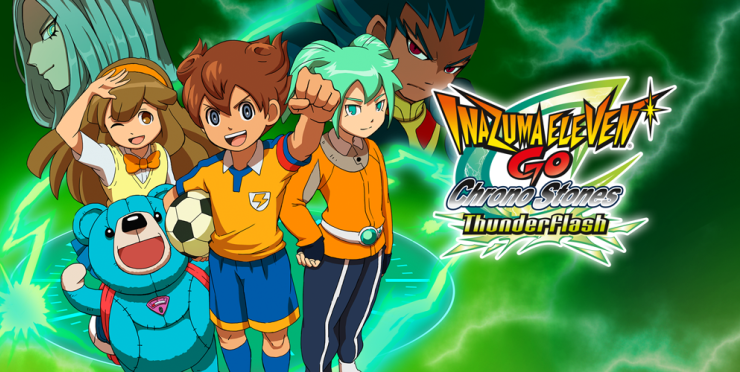 Blitzball was quite possibly the best thing about Final Fantasy X. Although it was just a side game to the main event, Square-Enix included an extensive scouting network, alongside players that level, abilities to gain, and rewards from completing objectives. At a certain point it was impossible to lose, but I played it to death.

Inazuma Eleven GO: Chrono Stones Thunderflash (you can sod off if you think I’m typing that over and over) to me is a fully fleshed-out Blitzball game. A sports RPG in where you level up your players, gain new abilities and items to strengthen your team and achieve victory. I had no idea what to expect from a sports RPG, but I’m happy to say I enjoyed this immensely.

The game follows the trials and tribulations of Arion Sherwind and Raimon Football Club as they battle people from the future who are trying to put an end to the game of football for… reasons. They’re going to achieve this by playing football (fighting football with football to destroy football – sounds legit). What ensues is a time-hopping adventure where you find yourself in different time periods playing football with historical figures so your team improves and you can save the sport of football. Considering how much danger they put themselves in, it’s safe to say that Arion and his friends are rather obsessed with this football malarkey.

The chapters of Inazuma Eleven tend to follow the usual kids’ anime tropes of characters having a crisis of confidence as they go about their adventure, only to pull themselves together at just the right time to encourage the team to victory. While it’s nice enough to have a familiar structure to proceedings, it’s kind of jarring to see an influential player being commanding in one chapter only to have them downbeat and depressed the next. The translation work has been well done, but the English voice acting is dreadful. You do have the option to turn it off though if you desire. Over the course of the adventure you’ll run around the various locations talking to other people, buying things from shops and engaging in random football battles; it’s kind of your standard JRPG fare in that respect. The football element itself takes the form of either a 5v5 match where the first team to score wins, or an 11v11 match where the team with the most goals scored at full time is declared victorious. In these you use the stylus to draw paths for your players to run, tap other players to pass to them and tap on the goal to shoot. It works extremely well, and you’ll be pinging passes around in next to no time at all. Control isn’t restricted to the player in possession of the ball; you can trace paths for players not in possession to run as well to create space to pass into. It’s excellent stuff.

When players challenge each other they need to choose which direction they want to move between left or right. If both choose the same way the random number generator bumps up their base stats and the one with the higher number wins out. Choose different directions and the player in possession will run on by leaving the challenging player for dust. There’s a third choice here however: special moves. Using one of these will see either the challenger or challenged coming out on top if the other player hasn’t triggered one themselves. If they have, then it’s all down to RNG again. These base elements extend to shooting and saving too, left and right being replaced by Shot/Chip Shot and Catch/Punch respectively. These special moves can turn matches into spectacular, pyrotechnic affairs and can range from silly to hilariously ludicrous. Regardless, they’re always entertaining.

Football rules apply here too, with offsides, fouls and free kicks all represented in the game. Fouls are awarded seemingly at random as all of the animations for regular challenges to special moves wouldn’t be allowed on a football pitch (let’s face it, it’s not supposed to be a realistic representation of the beautiful game) and there’s no difference between challenges that result in fouls and ones that don’t.

The 11v11 matches that take place in the story can take two forms: you’re either given free reign to play the game, or you’re forced to endure story elements within the structure of the match. These story elements can be frustrating, as often you’re onto a loser that you can’t prevent in the name of story, but this hasn’t been communicated to you effectively enough, meaning that you can find yourself using special moves and abilities frivolously and wearing your players out before you realise that no matter what you did you couldn’t prevent it. You’re given ample time to catch up afterwards, with a new ability normally being unlocked as a result, but it’s a needless frustration being made to play a section in which you are basically a spectator.

You can at times find yourself behind the level curve as well, which is where our old friend grinding comes into play. The battle matches are unfortunately useless for levelling your players, offering only five player slots and scant experience rewards. There is another way around this: one person in the overworld offers matches in a tournament-like structure against eleven player teams. I found this to be a much more efficient way of gaining those all important levels for the challenges that lay ahead. This then invalidates the Battle Matches outside of scouting players, which is in no way a necessity.

As a gripe, though, the grinding is pretty minor. Inazuma Eleven GO: Chrono Stones Thunderflash is a decent title, and remains fun despite the horrendous voice acting and grindy nature. It’s a game that surprised me with how much I actually enjoyed it. I daresay it may surprise you, too.

Football with a twist
Very fun
Easy to lose hours to

Ignore the terrible story and turn off the voices, Inazuma Eleven GO: Chrono Stones Thunderflash is a decent title that’s worth your time.