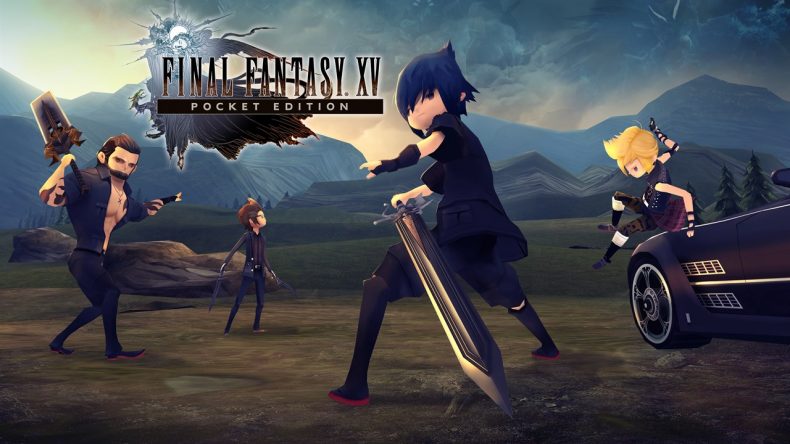 It was never going to happen was it? Nintendo’s amazing little handheld, the darling of many and the most requested machine to port to was never going to get the full fat Final Fantasy XV experience. Square Enix, with their love for the visual tour de force for their flagship RPG series would never get the game to run on a machine considerably underpowered compared to the PS4 or Xbox One. But still, here we sit with what is essentially the Switch’s first mainline Final Fantasy title albeit in a considerably cut down form.

Final Fantasy XV: Pocket Edition strips it’s parent software down to the ultimate bare bones, dispensing with anything considered fluff or filler and basically prodding you along a predetermined route from beginning to end. So strict are these cutbacks that the game loses a part of its personality while gaining charm and brevity. Bringing the game to mobile phones and tablets meant a complete reworking of the game’s visuals giving us super-deformed versions of the characters with some rather odd results. The main protagonists look good especially Prompto and Gladio, but the less said about Noctis’ permanent scowl and the eyes of Ardyn, Ravus and the young version of Lunafreya the better. Anyway, combat is initiated by holding the Y button to attack, X warps to distant enemies (or close ones for a harder hit) and B dodges. You can switch between Noctis’ weapons by pressing L and R, but this is kind of hit and miss with how quickly it happens that is if it even happens at all. Thanks to the ability map I had extra damage should I warp strike while the polearm was my selected weapon, but so unreliable was the weapon switching I basically didn’t bother with it. The fact there’s no lock on either means that Noctis often combo strikes past enemies, flailing at midair while his combo ends. Both of these are considerable annoyances for a fighting system that flows so well on its bigger brother, and even worse is the fact that your AI compatriots are more than happy to stand in areas of poison or flames until their health whittles away to nothing.

This is probably going to get irritating before it starts getting better, but I have to get the bad parts out the way first, so I’m going to continue. Load times are considerable, which is a shame seeing as it’s not the most taxing game to look at. The worst offender is the original boot up which takes so long I actually thought my Switch had crashed before the game finally bloomed to life. And then there’s what the game’s new brevity removes from the overall experience. The most saddening omission is Prompto’s photos, looking through those when making camp really made the ‘boys road trip’ feeling come through in the main game (despite the constant death and destruction the game throws your way), and not having them there just removes Final Fantasy XV’s loveliest feature. Also, while the lads banter and chat as they roam around (the linear environments) the repetition does tend to grate rather quickly.

Now, let’s talk positives shall we? There’s a considerable quantity of voice acting here, it lends the game some of the personality of the original and despite the fact that some of the drama is lost through a lack of facial expressions on the character models. Condensing a hundred plus hour game down to something that can be finished in sixteen hours is a considerable achievement, the fact there’s zero fluff left means you get a nice short game and what’s left are all the biggest story beats the game has to offer. There are no distractions, no myriad of side quests to trawl through, just a straight line start to finish. You can go back and play previous chapters if you feel like grinding, but it isn’t necessary to finish the game. The distillation of the fighting system works as well, granted as I’ve said, there’s no lock on, but holding down Y and pressing B to dodge at the required time means you can monitor what’s going on even when there are several enemies on screen and explosions going off constantly. Not only this but for the most part the Unity engine manages to keep the frame rate steady during gameplay but fluctuates during cutscenes.

So, Pocket Edition means more than just taking the game to mobile. It means condensed and tweaked until anything extraneous and non-essential is removed. It’s not perfect by any means, and apart from the lack of lock on my issues with the game are nothing more than petty. As an introduction of a Final Fantasy to the Switch there probably should have been other titles first (which are coming) but this is a perfectly good appetiser before per the main course arrives.

No lock on
Lacks the road trip feeling
Weird eyes

Probably the most un-Final Fantasy game in the series history XV Pocket Edition HD at least provides a decent game to get us going before more full-fat titles arrive.

You may also like
final fantasy xv: pocket edition