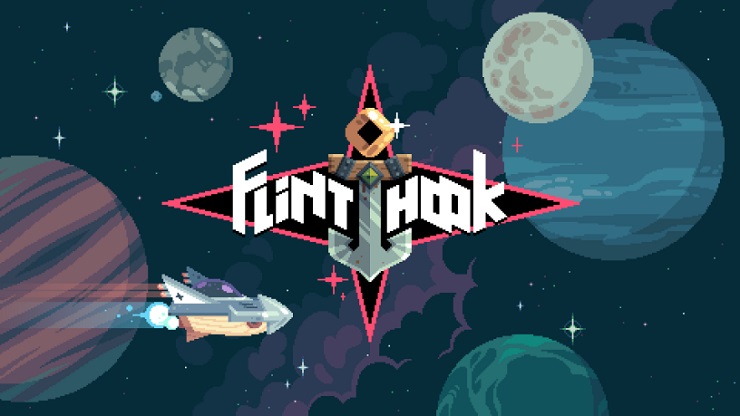 Ever since I discovered Spelunky and got addicted to it, I’ve been making it a point to try almost every rogue-lite game out there. Games like Risk of Rain and The Binding of Isaac have stuck but others get boring quickly. When I first read about Flinthook, I was really excited to play it and the experience has been good, but also disappointing.

Right from booting it up for the first time, I fell in love with the music and the menu design. There’s obviously a tutorial at the beginning and it is really well done. You play as a space pirate and use a large grappling hook to forcibly board ships to plunder. Each ship is full of rooms that are procedurally generated. There are challenge rooms with lots of enemies to clear. Your aim is to navigate to the end of each ship and find the final treasure room. Traversal happens on foot, but mostly through the grappling hook. The best way to explain how Flinthook feels in motion is imagining Spiderman but developed by an indie studio for a roguelike. There’s a learning curve for the basic controls because of how unorthodox they are. The left stick is used not just to move around but also to aim the reticle that decides where you shoot or where your hook extends. I recommend playing the tutorial twice, or just expect to get your butt kicked multiple times in the actual levels as you get used to things.

Once you finish a run, you unlock perks and the permanent upgrades make your life a little easier on the next runs. There’s lots to unlock and experiment with. You also have a loadout before getting into a new run that can make or break it, but obviously the roguelike nature will ensure things play out differently. The enemies get harder as well and eventually some of them even have a shield that needs to be hit with your hook to break through. Things get really dicey when there are lots of enemies in a room and the room itself is full of objects that are out to get you. You will eventually be in harmony with your hook as you quickly navigate through rooms without even touching the floor in some cases. One major problem I have is how the visuals while great are an obstacle in some cases. When a lot is happening on the screen, the background really annoyed me. I wish it was subtle or darker so it didn’t interfere. There are so many different objects around the levels that it feels over designed in many areas. While these things look great in screenshots, in practice they don’t work out too well. Other than that, I’m a big fan of the character art and item design. The animations in particular as you zip across a level into the shoot to hook into the next room is commendable. Patrice Bourgeault has done a great job on the soundtrack. It is catchy and the chiptune elements fit the pixel art visuals well.

I also feel like Flinthook would have been a better game overall had it not been a roguelike. These mechanics and amazing visuals deserve handcrafted levels with a good story. As of now it feels like two very good games merged together, but the result is a bit disjointed. The progression is a bit too generic with the usual upgrades.

Flinthook is a combination of some really good ideas with a lot of visual talent and a great soundtrack. The controls feel great and I wish I enjoyed it more. It does not have its hooks in me (pun intended) like The Binding of Isaac does where I keep playing it whenever I can and wherever I can. It has a lot of heart to it, but didn’t resonate with me as much as I’d hoped it would.

Flinthook would have been a much better game with handcrafted levels as opposed to being a roguelite and one that needs some tweaking visually.