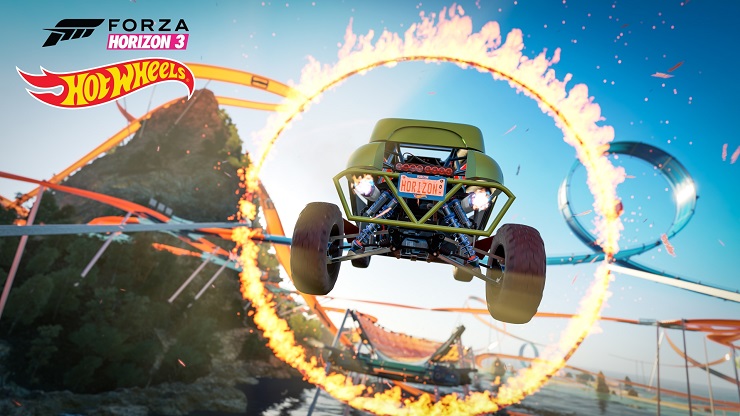 I won’t beat around the bush; I loved Forza Horizon 3. The handling and Drivatar AI, the gorgeous Australian setting, everything came together to create a racer that was semi-realistic but, most importantly, it was fun. The first expansion, Blizzard Mountain, added a new snowy challenge that felt different and refreshing, but nobody predicted the direction the second and final expansion would take. Hot Wheels? Right out of left field.

It works, though. It really does. Playground Games doesn’t shy away from acknowledging this wild change of pace, with the radio DJ cracking jokes about how Horizon can rewind time, having a little dig at that most unrealistic (but very much appreciated) of additions to the Forza franchise. The realistic handling hasn’t changed, but that’s where the realism ends, as giant orange tracks that twist and turn at impossible angles, and loop-the-loops dominate the skyline. Hell, there are even mechanical Tyrannosaurs the size of buildings, towering over the forest area of the map. To complement this change in tone, the DLC comes complete with Hot Wheels vehicles too. These really look the part, especially the Bone Shaker, but there are also new versions of the Ford Mustang and Toyota Hilux to drive around this wonderfully inventive new island. These new vehicles are often chunky, with visible engine blocks and exhausts out the wazoo, the Bone Shaker even has a skull on the front, and they really do look like full-sized versions of the Hot Wheels toys your children play with. And you know those little whirring mechanisms that launch the toys off ramps and whatnot? Yep, they’re in the game too! These launch your car forward at a ridiculous pace, propelling you over massive jumps or around corners that twist like a wall of death. Every now and again though, these boost pads are in awkward places; before a tight bend, for example. It just causes bouts of irritation in an otherwise fun expansion.

There are other issues that come with taking a semi-realistic racer and sticking in a crazy, arcadey and unrealistic new gameplay style. The physics system sometimes means that you have to brake for a corner, but due to the unnatural angle of the bend, slowing down sometimes isn’t an option – falling out of the sky will soon follow, if you lower your speed too much. There are sometimes unseen bumps in the road too, which can catapult you over the side of the track into oblivion, which will place you back on the track if you’re not quick enough to rewind, losing you so many places that you might as well just restart the race. The AI seems to struggle with navigating certain elevated track pieces, especially some of the more extreme bends and jumps, and it feels more aggressive than before, actively shoving you into the sides of the track. On more than one occasion, I was sandwiched between cars or pitted, leaving me struggling to keep the back end in check. These could just be teething issues as the Drivatar system catches up with players learning how to navigate the new gameplay mechanics, but right now it’s another annoyance.

Progression in the Hot Wheels expansion is basically the same as it was in Blizzard Mountain, with a maximum of three medals being awarded for your performance in each event. The first two medals are simply obtained by finishing the race and winning the race respectively, but the third is always a little more difficult to win, as they’re for things like beating a certain lap time or getting a set number of skill points. Medals are the currency for moving on, with each stage of events needing more and more medals to unlock, and the difficulty steadily increases due to the faster cars used in each tier of events.

Much like the main game, you can tailor events to your liking, using Stunt Swap, instead of participating in the standard championship races the game offers. Instead of choosing routes, you can swap out track pieces, adding loop-the-loops or bumps to the pre-defined route. This doesn’t exactly flip the game on its head or anything, but it does add a little bit of customisation to this new experience, and you can share your edited races with the world, meaning you can also play others’ creations as well. This goes for all available events. It’s not just about those events though, as you can still drive around the map as you like, in any car you own. This is still Forza Horizon, after all, and free roaming is one of its staple elements. There are extra challenges around the island, such as speed traps and drift zones, and these can also earn you up to three medals each, so it still rewards you for simply going for a drive. There are XP boards hidden off-road and even a solitary Barn Find awaits you, if you’re a collector. It’s an island packed with content.

With its open roads of orange plastic twisting and turning through the sky, and a ridiculous sense of speed and adventure, this Hot Wheels DLC will appeal to anyone with fun in their heart. It’ll put a smile on your face as you’re catapulted around the bonkers tracks. Only the sourest of people will fail to see the fun in this expansion, despite its AI issues and occasional physics glitches.

The Forza Horizon series has always embodied the adventurous and fun side of driving, and the Hot Wheels expansion delivers that in spades.