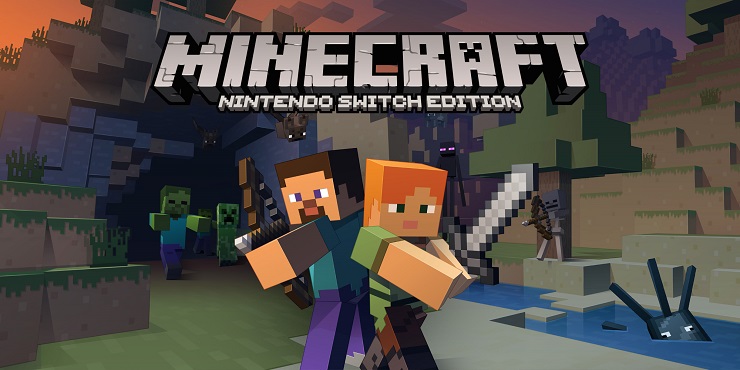 You’d literally have to have been living under a rock to not know what Minecraft is. Since its original launch back in 2011 Minecraft has seen a release on nearly every format released after 2007, from home computers to mobile devices. It’s even been brought into schools and used as a resource for teaching children. Six years and a purchase by Microsoft later and Minecraft’s multi-format releasing continues apace with the game now coming to Nintendo’s new home console/handheld hybrid The Switch.

If you are unaware (how?) of Minecraft, it’s a survival-craft ‘em up where you dig, break, kill, destroy and build your way through the world in which you spawn in. Materials are turned into tools, and facilities for you to create other items to ensure your continued safety and ability to shape the world as you see fit. Creatures roam about that will either try to kill you, or can be kept and bred together, or killed for food. There is an end-game to this with the ultimate goal being to find your way to a portal to the Nether and to kill the Ender Dragon there, but when you can build your world in your image why go and fight? Outside of survival you can partake in Creative mode, where you’re under no danger whatsoever. There’s no need to gather materials, you have infinite resources and a giant sandbox to create whatever you want. The tools are so flexible that over the years we’ve seen some incredible creations, from the locations from Game of Thrones to working hard drives and cannons. With a little hard work and ingenuity, you can create almost anything, and doing so is an almost zen-like experience within which you can sink significant portions of your life.

This is the full-fat Minecraft experience, with several texture packs included; chief of which being the Super Mario mash-up pack, which turns the world into a giant facsimilie of the Mushroom Kingdom, including working pipes, Peach and Bowser castles, giant character effigies and themed music for the locations. It’s so good in fact that you feel a little guilty taking your pickaxe to it and demolishing it all, but hey, that’s the object of the game. We also see the recently added Adventure mode and Battle and Tumble minigames included and it all runs at 60FPS with impressive draw distances, albeit at only 720p. Not that this lower ‘p’ value matters, the graphical style of Minecraft has always been about function over form anyway and as a result you’ll struggle to tell the difference between its other format brethren.

Minecraft has support for Nintendo’s Switch philosophy with support for up to eight players together online, and up to four players via local co-op either on TV or in tabletop mode. But since Minecraft makes use of every available button on a controller Mojang hasn’t been able to make use of the Switch’s separate JoyCons for individual players. You can take it on the go, but you need extra sets of JoyCons or Pro controllers for other people to play. While it’s nice that it can support many ways of playing together, ensuring you have the facility to play together locally could prove to be an expensive endeavour. What’s also upsetting as well is that there’s still no way to link your Minecraft profiles from other formats. Many mobile titles allow you to link social media or e-mail accounts to them to ensure you can play your same profile across different devices and even operating systems, we’re also in a time where both Microsoft and PlayStation are making noises about allowing cross platform play so it’s a little disheartening that migrating from a different console to the Switch version means you’ll have to start again from scratch. This may not seem like a huge problem, but for those people who have put days, months and even years into their creations on other formats, moving to a new platform may be a bit of a hard sell. Allowing players to tether world seeds to e-mail accounts would be the next big thing that Mojang really need to work on to make Minecraft a truly cross platform title.

These issues are things that Minecraft has had for a while now, so they are relatively palatable. But Nintendo’s pricing policy for their peripherals makes using the Switch’s USP when playing Minecraft almost a non-starter. It’s a rather big blip on an otherwise perfect version of a great game. If you’re happy with those caveats then Minecraft on the Switch is the way to play it, building anywhere and everywhere and playing into both the theme of the game, and the philosophy of the system. This is the definitive version of the definitive world building game and should have a spot in your Switch library.

Minecraft at home and on the go
The full-fledged experience

Local multiplayer is expensive
No world migration between platforms

Releasing Minecraft on the Switch was a real no brainer for Microsoft, the game has found a natural home and is worth yet another purchase.