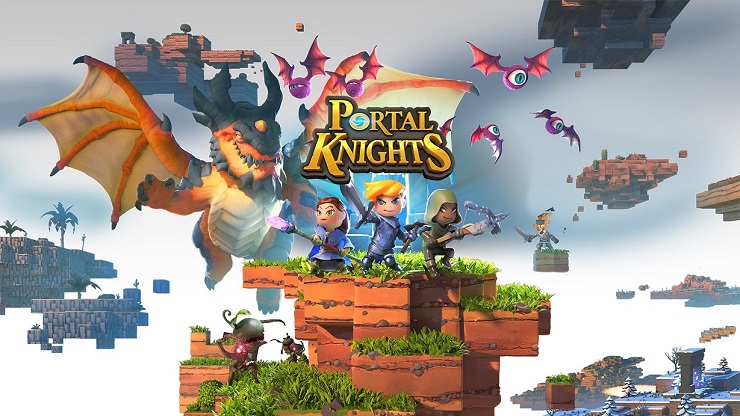 It takes a certain confidence to release a game that inevitably will be compared to Minecraft, but Portal Knights does enough with the formula to create a game that stands on it’s own merits. It does so by blending in a number of different components to create a game that retains the sandbox appeal of crafting games, but filling it with a sense of direction and purpose that the behemoth in the genre tends to lack.

The premise of Portal Knights is that something has torn the world apart and created a sequence of islands that are only connected via mysterious coloured portals. By returning the portal stones (items that you craft from either killing enemies or mining for resources) to each portal on the island you will open up another island to explore and get closer to discovering what has happened. The storytelling is loose and largely inconsequential as most of your time will be spent gathering resources to build and improve your equipment, hopping between islands for precious items and to destroy enemies for XP. Borrowing loosely from RPGs there is an element of role playing with three broad classes that you can choose from: Warrior, Mage and Ranger. Each have their own set of equipment and skill trees to fiddle about with, but in practice none of the classes remain distinct enough to make that much of a difference when playing. Each class has a choice of three weapons, in the case of the Ranger there is a crossbow, a bow and throwing knives, the Mage can utilise a staff, scythe or wand, and the Warrior an axe, hammer or sword. By killing enemies you amass gold coins as well as experience points which can be put into statistics like Strength, Dexterity, Intelligence etc. In addition for each 5 levels gained you will also get a point to spend in the class specific talents which provide additional statistics like increased damage with wands for the Mage class for example. Coins can be spent with traders that can be found on different islands, selling things like new crafting recipes or consumable items.

The islands that spawn are all procedurally generated, but the story path is always the same. That is to say that island five will always be called Garnet Peaks and contain emeralds, but the landscape and dungeons spawned in that world will be different each time. Enemies and resources remain the same in Garnet Peaks though, regardless of how many times you spawn a new game.

Your goal is to progress through the islands. Each world has 47 in total, each with different enemies and resources. At various stages your progress will be barred by a mini boss that you have to defeat to unlock the next set of islands and access higher tier resources which in turn allow you to craft more powerful weapons and armour. The core gameplay loop then is a process of hopping between islands to grind out materials to craft yourself progressively more impressive gear. As you do so you can also start to find more interesting blocks with which to build structures on the island that you choose as your home. Islands are suitably diverse with a broad variety of biomes between them. Garnet Peaks for example has the appearance of an autumnal wood with bright splashes of orange and yellow. A later island, Angler’s Wharf, has lots of water sand and palm trees. Each island is only a single biome though, if you want variety you need to travel to another one. Visually, Portal Knights has a bright, colourful aesthetic with a cutesy character design that reminded me very much of the free to play game, Happy Wars.

Portal Knights is a crafting game at heart, but on console the controls are a little fiddly with the UI systems feeling unnecessarily complicated. As you progress you can upgrade your various crafting benches and with each new iteration more recipes become available meaning there is lots of scrolling through menus trying to find the one that you actually want. Building is straightforward and there are plenty of different blocks to choose from to create some interesting structures, although because you are hopping backwards and forwards between islands there is little incentive to really shape any particular island in the way that you want it as the idea of a base from which to set out from is negated by the fractured elements of the world. Portal Knights boats four player co-operative which works seamlessly as a drop in, drop out process. Experience received from completing quests and killing enemies is shared between each character, but the resources gathered are not which is why the co-op play is limited to your friends only. Furthermore, your world is persistent so you can create different characters at any point and have them visit your original world at any time and spawn on any of the islands you have already unlocked. Sharing resources between characters is a simple process of loading up the desired world with your chosen character.

Taking inspiration from a variety of sources Portal Knights is a crafting game that mimics what makes Minecraft so compelling, but merges elements from RPGs and the action adventure nature of games like Terraria with boss fights to make it a sandbox with a goal. You can choose to follow this goal, or stay largely in one place building to your heart’s content. Crafting and building is fun if a little unwieldy at times, and combat is a little awkward particularly in the beginning, but that soon dissolves as you explore further digging into each island to uncover its secrets. Islands are diverse and offer enough visual variation to keep pushing you forward also, and the seamless four player co-op makes exploring what each island has to offer much more exciting. Like all of these games though, the real proof of its success will be displayed through the imaginative builds the community dreams up and there is certainly enough core materials for this to be a possibility.

UI is a bit messy
Combat is a little awkward

Portal Knights takes inspiration from a variety of games, blending the crafting and building of games like Minecraft and merging loose RPG elements to make it a sandbox game with a goal.

Portal Knights is now available at retail for Nintendo Switch