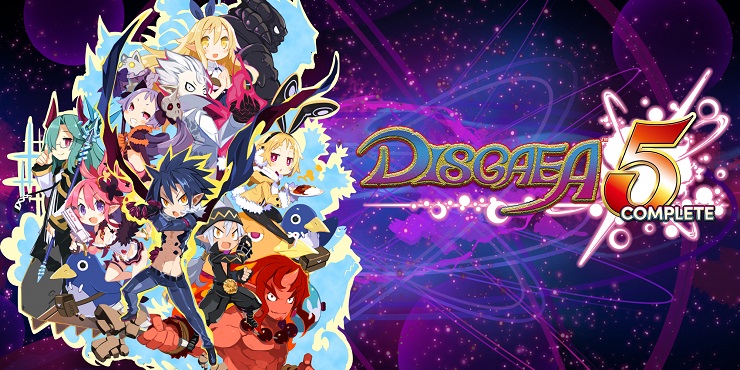 I only discovered the Disgaea franchise on PlayStation Vita through Disgaea 3 Absence of Detention. I ended up really enjoying it, but the game that made me a huge fan was Disgaea 4: A Promise Revisited. Both of these releases are enhanced and portable remakes of PlayStation 3 games. They felt so perfect on the Vita given their SRPG nature with quick battles that I was actually disappointed when Disgaea 5 was announced as a PlayStation 4 exclusive title. I obviously bought it and enjoyed it even though I did spend a nice amount of time playing it on remote play. Today Disgaea 5 releases on Nintendo Switch along with all the DLC as Disgaea 5 Complete. This is the first Disgaea game on a Nintendo system since Disgaea DS and it is a superb game for both fans and newcomers to the franchise.

While some people keep beating the dead horse that is Final Fantasy Tactics for their SRPG fix, others have moved on to the likes of Fire Emblem with its resurgence thanks to Awakening, but ignoring Disgaea is a crime against humanity dood! Everything about this game is fun and the humour is lighthearted. You play as Killia who seeks revenge against Void Dark. Void Dark has taken over netherworlds with his army of The Lost. Seraphina is an Overlord and she makes Killia her obedient servant after being super impressed by him in a battle. The story is interesting enough and the humour never gets old. I can’t imagine anyone not enjoying this tale. Get ready to take lots of screenshots of dialogue dood. The overlords you meet are all great and they all seek revenge. The main places you will spend time during gameplay are the Pocket Netherworld and the battle stages. The hub area is full of a ton of different NPCs that are at your service. This is daunting at first, but makes sense after spending a little time experimenting and talking to NPCs. You can do everything from buy items or equipment to recruit more party members and even watch cutscenes and accept some quests. I recommend interacting with everyone here until you get your bearings in order.

Battles take place in a grid based manner in a similar vein to Final Fantasy Tactics, but the amount of stuff you can do is straight up bonkers. Each stage has a ton of ways to complete it and even grinding never gets old. There are controls for movement speed and combat speed if you are into doing that stuff. There’s an overwhelming amount of ways for you to approach any stage but that’s what I love about Disgaea. Everything is up to you and this is a statistical dream or nightmare depending on how you look at things. The reason Disgaea 5 wasn’t put on Vita is because they decided to up everything to take advantage of the PS4’s power. This meant a tenfold increase in the number of characters on screen compared to previous entries along with some amazing animations. Some of them are hilariously over the top.

Speaking of animations and visuals, I’m happy to say that everything looks and runs great in both docked and portable mode. There’s a minor performance problem that is the only small problem with the visuals and performance here. Characters look great and if you’ve played the PS4 release, things will look more or less the same. There’s been no enhancement or improvements anywhere in this department. Most of my time spent here was obviously done in portable mode and it felt great just finishing off a stage quickly while waiting for coffee at Starbucks. To put things into perspective about how crazy and content packed this release is, there’s actually an item world and a character world. These create dungeons out of items or characters that let you raise the stats of an item or a character through progression. All the DLC released on the PS4 version is available here and is pre-installed. You do have to manually activate it through an NPC because some of it breaks the game balance as expected.

Since the PS4 release had dual audio, you can play Disgaea 5 Complete with either English or Japanese voice acting and both are great. The music however is excellent. Not only is this the best Disgaea score, but it is one of the nicest soundtracks you will hear in an RPG in recent times. The vocal tracks are catchy and the upbeat battle themes are all wonderful. Tenpei Sato did a great job with these tunes. My main complaint is with the lack of touch controls or touchscreen features. Given how well the likes of Final Fantasy Tactics and The Banner Saga play on touch devices, I was hoping to see some of that implemented here for portable mode. Unfortunately you can’t even navigate the menus with touch here. I don’t even think this will be added in a patch because the game has been out in Japan since the Switch launched. It would have been a nice addition to have. There’s also a small performance issue where there is some minor stutter when you walk around the hub world. This is even seen on the loading animations sometimes. It is minor but noticeable and akin to that seen in Dragon Quest Builders’ localised release on PS4.

Aside from those issues, Disgaea 5 Complete is absolutely worth your time. My time spent with it on Switch is only rivalled by the time put into Zelda in terms of fun. It is worth putting Mario Kart 8 away for if you’re a fan of strategy role playing games. Games this good and packed with this much quality content don’t come along too often. Expect to drop literally hundreds of hours into Disgaea 5 Complete. They will all be worth it. Playing this in portable mode has been fantastic.

Some minor stutter
No touchscreen features

Disgaea 5 Complete is the best version of Disgaea 5 and a great strategy RPG that is well worth your time.