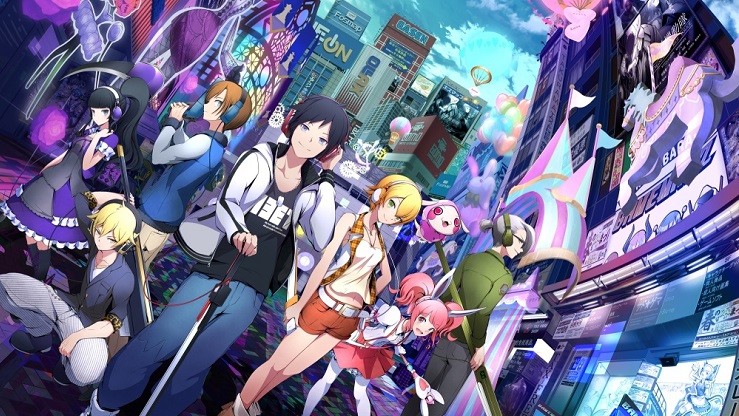 These last few months have seen some really great games released on PS4 and many of them have been from Japan. In fact the people who ignore portable gaming have suddenly discovered Japanese developers and their games. Things weren’t always like this for the PS4. One of the first few true Japanese games I picked up on PS4 was Akiba’s Trip: Undead and Undressed. The stripping mechanic was enough of a reason to try it out and I enjoyed whatever I put into it. Today, Akiba’s Beat is releasing on PlayStation 4 and Vita and it has disappointed me quite a bit.

Instead of building on the stripping mechanic, Acquire has dropped almost everything interesting for a more by the books action RPG here. Akiba’s Beat plays like a lower budget Tales of game with a wannabe Persona premise. You play as Asahi Tachibana who is an unemployed shut in or NEET (not in education, employment, or training) in Akihabara. For him everyday is the same and it is more or less like a Sunday for everyone else. This becomes reality soon when he gets pulled into a loop where the day restarts when it ends. It will never stop being Sunday for him unless he does something about it. Asahi and his small group of people who are aware of this aim to get to the bottom of what is causing Akihabara to be like that. There’s some parallels with Persona where the innermost desires of a few cause the real world to change in a delusion. The opening screams Persona. You’d think the story would hook you to some extent but the structure of the gameplay loop and flow bored me. Exploring Akihabara should be fun and for a game that is literally based in Akihabara, I expected visuals that didn’t look dated even if you look at it as a handheld game first. Akihabara while structurally fun to explore is split up into various zones. There are load times aplenty and the environments look like a dated version of Tokyo Mirage Sessions with NPCs being represented by coloured silhouettes. Everything looks flat and having loading screens or gates areas in a particularly small sandbox location soured me even more. Even menial tasks like getting to back home with fast travel treat you to long load times. Given the visuals on display, these load times feel unwarranted.

Dungeons or “Delusionscapes” as they are known here are hit or miss. The structure of most of them is boring and the visuals range from really bad to decent. I like the themes and their implementations in the dungeon like even the opening dungeon being an Audiophile delusion has tube amps across the dungeon flashing. This is Acquire’s first proper action RPG and it kind of shows. Combat feels laggy and floaty. Coming from Tales of Berseria earlier in the year to this, combat feels like a huge downgrade. There’s an imagine gauge on the bottom left that fills up as you attack and you can trigger Imagine Mode. Imagine Mode has various benefits and allows for skills that have their own cutscene like animations and yes, this feels like it was lifted from Tales of as well. There’s also a change in music accompanied by visual effects as the gauge depletes.

Progressing after a Delusionscape involves tons of interacting with characters and ploughing through a lot of dialogue. This wouldn’t be a problem if it didn’t require you basically running from one part of the area to another to talk to people only to return back and then be asked to go back home with a lot of loading in between. There is some silver lining though. Character portraits look really good and I liked the transition from the world into dialogue where the background is blurred with character portraits and the UI in front. The opening song is also something I really liked. This extends to the soundtrack which is mostly very good. The voice acting on the other hand is inconsistent. There are dual audio and dual text options here and I spent most of my time with the English dub since XSEED advertised it as their biggest dub ever. The only problem I had with the voice acting was the incessant Pinkun commenting on almost everything while I explored Akihabara. It would have been better if they just had him remind you to buy items or save with subtitles and not voices. This made me hate him quite a bit.

Akiba’s Beat is a mediocre game that tries to do too many things and be too many games at once without having its own identity. You’d be better off playing Tales of Berseria for your action RPG needs and eventually trying Akiba’s Trip if you still want a taste of this universe. I can’t even imagine how this plays on Vita if I had so many problems with it on PS4. The long load times, floaty combat experience, and overall premise here made me dislike Sunday like it was a Rebecca Black song.

Akiba’s Beat is a tedious action RPG that has very few redeeming factors and one that has made me appreciate Akiba’s Trip even more and that is saying something.