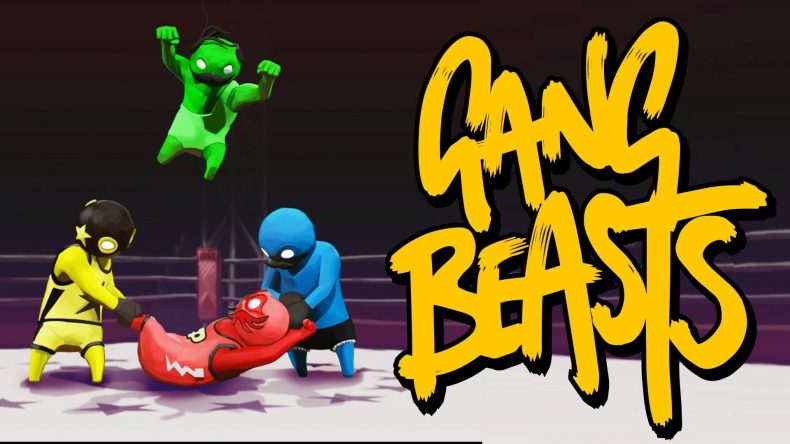 There is a lot to be said for the party game: often a small throwaway game that doesn’t merit extended play, but in small doses and in the right company it’s usually an absolute delight. Gang Beasts is no exception to this loose rule, albeit in very small doses.

Gang Beasts is a multiplayer brawler with a cast of gelatinous creatures imbued with ridiculous physics. Matches take place on a variety of vertiginous and hazard filled environments where you duke it out to be the last blob standing. It is often lung busting in its hilarity, but extended play shows up its very obvious weaknesses. The controls are reasonably intuitive, however a lack of any tutorial to familiarise yourself with them means that your first few matches are a hilarious mismatch of accidentally landing drop-kicks and head-butts while also wobbling around the environment without a clue how to do anything. Your move set is fairly limited, you can jump, climb and grab onto objects, lift your arms into the air which is incredibly useful for throwing a prone opponent off the side, head-butt and flail your arms wildly. The imprecise nature of the controls, combined with some truly dreadful physics lend themselves to insane and often very amusing matches as you thrash about accidentally landing drop-kicks and inexplicably falling over. The physics reminded me very much of Goat Simulator (just so you can get an idea of how bad they are), but unlike that game Gang Beasts is actually fun.

There are a few modes to choose from: a wave mode that pitches you either solo or with a friend against a wave of incredibly capable AI combatants, a general brawl mode where played against other human players with the goal of being the last beast standing and a football mode which is limited to one arena and hilariously manages to capture the casual violence of an impromptu football match with friends. I collared my football mad son to play with me on this mode and it devolved into a 15 minute match of grabbing and dropkicking each other to score a goal. I lost horribly after my son figured out how to head-butt me to the ground where I laid prone for precious seconds while he scurried away and managed to score, all why I and he were choking from laughing so much at the ridiculous nature of it.

The arenas you play in range across seventeen locations, all of which have some peril attached to them. You can fight across two speeding lorries, aboard a huge blimp high up in the air, in a factory complete with meat grinders ready to squash your jelly baby style avatar into a mushy pulp. The subway map will see you scrapping it out on a platform with two tracks either side, enemies are eliminated by the regular speeding trains that roar past. Elsewhere there is a tonne of customisation for your beast which adds to the ridiculousness of it all. Scrapping my son while I was sporting a huge hamburger on my head and he with an emoji style poo for a head had me breathless with laughter for several minutes, but the laughter is short-lived as the repetitive nature of the game starts to reveal itself, and some of the poor design in terms of camera ruins your enjoyment. I lost count in the end the amount of times I had been thrown of the side of one of the arenas only to grab onto something at the last minute and then have the camera shift away so I couldn’t work out how to climb back up.

Gang Beasts is the perfect party game, one best played in small doses with a group of friends. The imprecise nature of the controls and poorly placed camera add to the hilarity much of the time, but also hinder any long term enjoyment of the game. It’s the perfect game to put on over the festive period after a few tipples and play with the family and friends before you move onto something else with more substance. But whilst the enjoyment is short-lived it still is probably the most you will laugh for a good thirty minutes or so.

The perfect party game, great for short-bursts of entertainment but doesn't stand up to lengthy play.