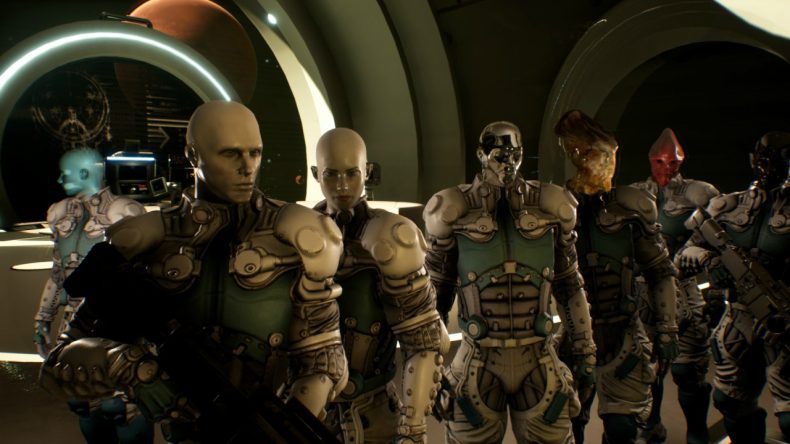 On paper, Genesis Alpha One seems like a bit of a Frankenstein’s Monster. Part base-builder, part space-exploration, part first person shooter, part mining and farming simulator, all wrapped up in a rogue-like procedurally generated universe. Tasked with a mission to find a habitable planet to colonise, you must explore the galaxy, gathering resources to grow your crew and keep them alive long enough to be able to do so. A peculiar blend of different styles from a retro-style ship interface to a 3D environment to walk around in, the reality of Genesis Alpha One lives up to its first impression. It has some intriguing ideas, but would have been perhaps better served had it stuck with a particular style and maybe reduced the amount of things you are required to manage and do.

There is something effortlessly cool about the start. The intro has a wonderful late 70s early 80s aesthetic that is carried through to the ship building interface, and the various work-station UIs. The ship’s computers have a lovely 70s low-tech Star Wars vibe to them, complete with rudimentary graphics depicting the various planetary systems or space debris for scanning. Continuing with the low-tech theme the ship building interface can be toggled between a flat 2D layout and a 3D semi-transparent model that can be manipulated and rotated for a full 360-degree view of your creation. Outside of the ship’s computers you can walk freely around your creation with a fully rendered 3D space that manages the scale remarkably well, but is the weird character models that look like animated store mannequins and lifeless, identikit planets that have something not quite right about them that make Genesis Alpha One a bit of an oddity. To begin you are invited to play the Tutorial which takes you through all the basics, from building your space craft to assigning crew to tasks, to landing on alien worlds to gather resources. To build your space station you will need a number of essential parts: a Greenhouse which will act as your atmospheric generator on board; somewhere for your crew to sleep; a tractor beam for gathering resources from floating debris in space; and some storage, all of which need to be built before you start. Once you have done so, the Tutorial then takes you through how to gather simple resources via a process of scanning the space debris and then using the Tractor beam to pull it on board, how to defend your ship from unwanted creatures that may be inadvertently brought on board during the beaming process and finally provides you with a run through for planetary exploration for more complex materials that will need refining, or for plants to help improve or change your ships atmosphere.

Once the Tutorial is complete you are free to start your first run. Genesis Alpha One is a rogue-like, so no two runs are ever the same; however, any knowledge or technology you have discovered in a previous run will be available to you in the set-up phase for a brand new run, providing you met the requirements in your previous run, of course. Game customisation options range from the type of crew you have (which is limited to humans only in the beginning), a corporation that is sponsoring the mission that will have certain specialisations ranging from cloning technology to a weapons focus, and a number of artefacts that are essentially modifiers that will give you things like boosts to your core statistics or increase your ability to discover certain plant types, as well as changing things like your starting weapons. To begin with you have none of these options, so it is clear that you will be playing over and over again, perhaps focusing one run on improving your weapons research and another on alien cloning rather than the primary objective so that a future run will have all the components in place for a successful mission.

Knowing that this will be a game of repeated failures is a double-edged sword. Trial and error is a key part of the DNA of the game so you will spend a lot of time in the initial phase performing the same tasks over and over again: building your ship, picking your crew, scanning systems for resources, removing infestations from your ship, until finally you manage to do or find something that makes the monotony of the early game different. Whereas it is useful to have a rough plan of what you want to achieve in any given run you are also at the mercy of the procedurally generated world, which more often than not creates a situation where you cannot progress to a satisfactory point because you can’t find a particular resource to enable you to move forward. On one run I managed to find a suitable world upon which to begin the genesis process, however I was unable to meet the requirements of having 20 crew to colonise it because I couldn’t find enough copper to build further components on my space station. The endless process of managing resources, landing on alien worlds, and defending the ship against alien infestations became too much for me to manage until, lacking in essential resources to repair my ship, both it and my crew were blown out into the vacuum of space, leaving me to set up a new run and hope for a better spacing of resources next time. There also feels like there is too much to manage. Once you build a component to your space station, you can assign crew members to man it to speed up processes – for example assigning crew to the tractor beam will marginally increase the time it takes to bring the resources aboard. You can also send crew members out to planets to gather resources, but due to the 3D nature of the planets it kind of feels like something you need to be in control of, particularly as the planets are almost always hostile. Meanwhile, back on your ship your crew just don’t seem equipped enough to manage any infestation on-board without your specific and direct input. It’s this weird blend of different genres and archetypes that don’t quite gel because everything feels like you have to action it, rather than you being the director of the action. Once things start to go wrong it feels like there is very little you can do to stop the inevitable failure, because you are fighting fires on too many fronts to be even remotely effective.

There also appears to be a lack of explanation on processes. Whilst out on planets or aboard your ship you can gather DNA strands from the creatures you kill. Once you have gathered enough you can then research the DNA in a cloning facility you can build on your station. Ultimately, once you have gathered and researched enough you can clone a new crew member that utilises some of the alien DNA that will mean they have new abilities such as resistance to certain illnesses. Introducing new DNA to your crew members may well change the environment requirements to keep them alive, which is managed through the Greenhouse component, however how this ultimately works feels a little muddled and under-explained. Similarly, when things start to go wrong and various elements of your station become inoperable or get destroyed it isn’t clear how to rebuild, so much so that there is an inevitability of failure once a fire starts or a power conduit goes down.

There’s some super interesting ideas in Genesis Alpha One, and the trial and error nature of the game as well as the ability to carry over technology and items already discovered makes for an experience that rewards persistence. There is also a distinct visual style and aesthetic that is decidedly retro and feels really good to use,but which isn’t carried through to the 3D portions of the game where the character design and world modelling look and feel a little underdeveloped. It is a shame, because there are elements of Genesis Alpha One that are really good, but it feels like the game would be better served by focusing on one type of play such as a kind of strategy game or city-builder where you are omnipotent and have a top-down view on everything going on, rather than having a first-person view and trying to be all things to everyone at once.

By trying to be all things to all people Genesis Alpha One loses any sense of identity. There is some really interesting ideas at work, and cool aesthetic in one portion of the game, but other areas feel underdeveloped.