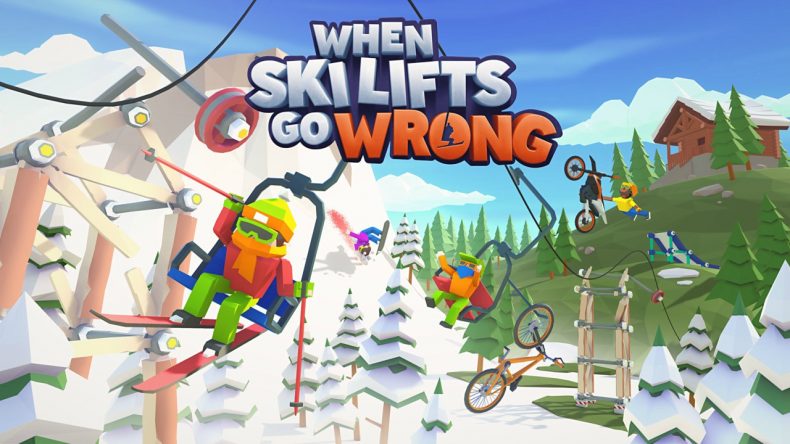 The first time I loaded up When Ski Lifts Go Wrong, I was puzzled to find that I was earning Steam Achievements without actually doing anything. It was only after a minute or so that I realised the little skiers and snowboarders that were hitting the jump behind the main men, were actually controllable. Pressing the Tab key removes the menu and allows you to make the little people jump and flip on their skis/boards… or make them smash their faces into the ground upon landing, low-poly crimson smearing over the crisp, white snow.

It’s this kind of daft humour that permeates the entirety of the game, almost making you forget that When Ski Lifts Go Wrong is actually a fairly challenging puzzle game. The idea, as you might expect from the name, is to build ski lifts (among other things, but we’ll get to that) to get folks from the bottom of a mountain to the top, so they can enjoy their time on the slopes. You’ll do this with planks of wood, blocks of concrete and various other things that don’t quite sound correct. Much like 2016’s Poly Bridge, the things you build will probably be done via triangles in order to survive the stresses and strains of weighty objects and people being lifted up the mountainside. You’ll have budgets and item limits to contend with however, so sometimes you might have to cut a few corners to make things work. Naturally, when things go wrong (there’s no “if” here; they will go wrong), it will likely be the result of too much weight and not enough structural integrity, causing the whole thing to come crashing down and sending the poor little skiers to their bloody deaths. The thing is, you’ll be too busy giggling to worry about it, because Hugecalf Studios’ game is not meant to be taken seriously. In fact, it’s this instant gratification that keeps you playing. Levels are deliberately small, so that you aren’t losing too much time when you fail and have to try again. Even scrapping your entire build and starting again from scratch, won’t lose you more than a couple of minutes’ build time.

Hugecalf likes to break up the building levels with a few simpler challenges too, focusing on building a ramp capable of getting a rider across a chasm or over trees and up a mountain. Despite its name, When Ski Lifts Go Wrong isn’t actually always about ski lifts and snow-covered slopes, it also includes lush green countryside on which to throw around mountain bikes and dirt bikes…usually throwing them at rocks, spilling their riders. It’s the jump-oriented levels that had me howling with laughter the most, and generally finding the most enjoyable to play. Probably because I’m a simpleton that likes to control the bikes and snowmobiles as they launch over jumps. As you might expect, the levels tend to grow rather tricky as you get further into the game, so don’t worry if you think there’s no challenge here. Even if you do find the levels a bit easy, there are always more being added by other players via the level creator. The creator itself is simple enough to use, once you get past its slightly awkward design. Considering the number of tutorials in the main game, I was surprised to find almost none in the level creator. What is there is a bit of a confusing mess, but once you work out what’s what, the tools are there to create anything from fun jumps to fiendish puzzles, and both are already filling the user-created levels. Again though, actually playing those levels is made a little more complex than necessary thanks to having to subscribe to a creator before you can download and play a level. That simply makes no sense.

When Ski Lifts Go Wrong is a fun puzzle game with a great sense of humour, and has limitless potential thanks to its user-created levels. It’s just a shame that getting to those levels takes an extra step too long, and building them yourself requires a bit of self-teaching, given the lack of visible tutorials. When you do get there though, don’t be surprised to find yourself laughing during your inevitable failures.

While When Ski Lifts Go Wrong can be laugh-out-loud funny, it also provides a huge number of challenging puzzles as you try (and often fail) to build reliable structures on unforgiving mountainsides.