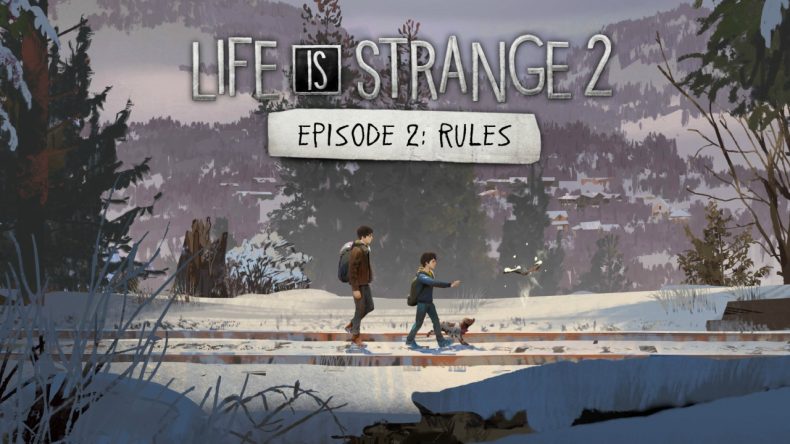 In a way, being such a big fan of Life is Strange can kind of ruin the experience. Knowing that each episode is going to have one of those “OH NO!” moments means that you can spot them coming from a mile away. That moment in ‘Rules’ comes much earlier than you expect it to, but unfortunately doesn’t come as a shock.

After the considerable quantity of events that unfolded in episode 1, ‘Rules’ takes a much slower approach, allowing Sean and Daniel time to relax and enjoy life rather than be on the run as they were previously. Here the boys have commandeered a disused log cabin and are living off of tinned ravioli that Sean steals from a nearby shop. Using their newfound freedom Sean sets about helping Daniel learn to use his new psychic power, and lays down some ground rules about its use. During their stay Daniel becomes ill and it’s obvious to Sean that staying in the cabin isn’t helping the young wolf get any better, so he makes the decision to move on to their Grandparent’s house in Beaver Creek, Oregon. This just so happens to be next to Chris and his dad from The Amazing Adventures of Captain Spirit. The interactions between Daniel and Chris further cement Daniel as one of videogame’s cutest characters as his joy at having a friend to play with is utterly adorable. It’s so easy to get carried away with the boys’ friendship that when the idea of going to a Christmas market is put to Sean, the elder brother relents and decides to go along, which is a terrible idea if you’re on the lam.

Sean’s notebook makes a welcome return, filled with his little sketches and notes about what is going on with their day to day lives, only now you get to actively contribute to it by sitting down and drawing in what is effectively a very clumsy mini game. In this you need to hold down X to observe what Sean is going to draw, then look down at the page and rotate the left stick to draw. You’ll need to repeat this process up to five times and, while the end results are nice to see, I just can’t help but feel that they’re not really worth the effort involved.

The previously mentioned Christmas market isn’t the only point where Sean Diaz breaks his own rules: at one point he decides to just have a chat with a libertarian and generally antagonise him in broad daylight, and then there’s the part that leads into the episode’s finale which doesn’t give you the option to stand firm and tell Daniel a flat out “No”. I understand it’d be hard for a kid to look after a younger sibling, but knowing how dangerous the world is for them at the moment Sean Diaz would surely know that it’s best to not poke the hornets’ nest in the ways that he and Daniel do. It’s not just the clumsy writing that’s wrong with Episode 2, ‘Rules’ is also a technical mess. Shonky animation was never a surprise in Life is Strange or Before the Storm, but the movement over to the Unreal Engine looked to have improved that in Episode 1. Here the odd twitches the characters suffer return, along with a myriad of other weird shadow-casting issues and texture clipping. There were also several bugs, like where Daniel’s eyes rolled so far back in his head that you could only see the whites. There was also a cutscene at the Christmas market where the character models for Chris and his dad got stuck in one place with Chris hovering in the air. This meant that the models didn’t appear in any of the cutscenes – cue Sean having a conversation about drawing zombies with thin air, plus a car door magically opening by itself and the car driving off while it’s driver still stood waiting for his tree to get wrapped.

There were more, but it wouldn’t be a good use of my time to list them, or your time to listen to me go on about them. The thing is, while it’s nice that this episode slows things down and allows the boys time to actually live, it’s let down by these glitches and the rather odd story beats that fly in the face of the titular ‘Rules’. That said, it does culminate in one of the most heart-warming things I’ve seen in a game and, in spite of itself, still leaves you wanting more.

A lovely little diversion for the wolf brothers finds their biggest problem not to be the law, but inconsistencies in their own animation.

You may also like
Dontnod Entertainmentlife is strange 2PC