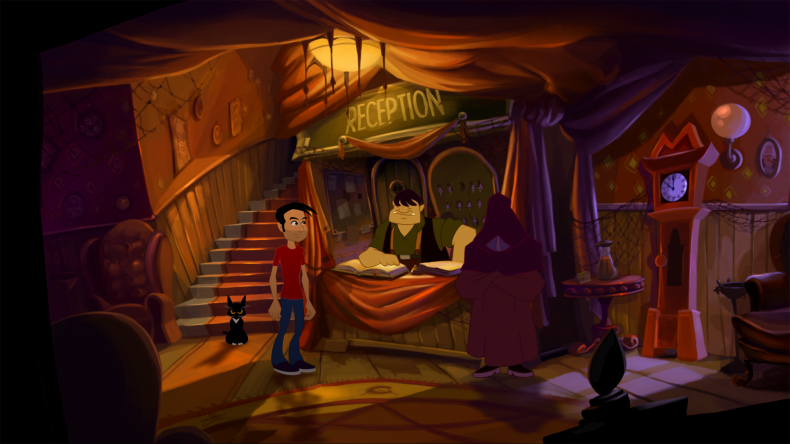 I’d not heard of the term ‘Gibbous’ before now; apparently it’s something defined by a hump or swelling but is more commonly used to refer to a moon between a half and a full moon. The game’s cat Kitteh uses it to refer to something partially hidden, or not fully revealed… yes, you read that right, the game’s cat says that.

Gibbous: A Cthulhu Adventure is a Lucasarts-style Lovecraftian-themed adventure game replete with branching dialogues and seemingly obtuse puzzle solutions. It’s a game of stunning backgrounds, some rather lovely animations and it’s about a half Romanian boy called Buzz and his unimaginatively named cat called Kitteh. After a meeting with a detective by the name of Don R. Ketype, Buzz finds himself in possession of the dreaded occult book the Necronomicon and accidentally gives Kitteh the power of speech. Kitteh herself is a great character, full of disdain for her owner and always on hand for the odd quip or put down. She’s frequently pushed to the forefront of loading screens and chapter transitions but I can’t help but feel she’s under utilised. Very few of the puzzles make use of a cat’s lithe nature and innate agility and even a mid-game puzzle that finally puts her centre stage is slow and clunky. You can make more use of her asking for hints as to what to do next or for her opinion on something or someone, but most of the time Buzz himself will insist that it’s not worth bothering her which is a real shame.

The adventure of Buzz, Kitteh and Ketype takes them from Buzz’s hometown of Darkham to the rotten town of Fishmouth, and then to Paris, Romania and further beyond as they delve deeper into the mysterious cults that are trying to bring about the end of the world. So to do this you’ll need to try clicking on absolutely everything and combining everything with everything else to solve random unrelated issues to fix an otherwise complicated whole. Typical adventure game fodder, then.

Gibbous does at least get the basics right, conversations between characters flow naturally, and if something interesting is ever said it’ll pop up in the required dialogue tree later prompting you to press it. There’s a plethora of extra items that have no bearing on your current task that you can pick up for extra comedy value, and holding down the space bar highlights all interactive elements on screen, which is very helpful if you’re maintaining a checklist of sorts to make sure you’ve in fact tried everything before deciding if a puzzle is broken. But, to be honest that doesn’t happen. Despite a typically obtuse opening Gibbous makes way for a series of puzzles that are really quite simple. There’s none of the completely outlandish solutions we’ve come to know from the genre. There is a brief shining hope when Ketype acquires the power to read the past memories of objects, hinting at the possibility of some rather fun audio based gags, but normally the solutions are too simplistic and what jokes do arise from this tend to fall flat.

What I will say though is that this is one of the funnier games I’ve played recently, the noir-esque detective stylings of Ketype’s narrating to himself giving way to the to and fro of Buzz and Kitteh’s relationship. But special mention must really go to a late game gag which, without spoiling it, showcases some rather impressive character art skills.

I’m not saying Gibbous is a bad game, far from it. It’s certainly a well-spun yarn, plus it’s rather great to look at. They like to say it’s like a Disney style animation, but I’d have to liken it more to a Don Bluth production particularly in latter chapters. But I know it’s hard to balance these kinds of puzzles; make them too difficult and players will tire of them, but make them too easy and they’ll be gone in a blink of an eye. Unfortunately for Gibbous it falls just a bit on the easy side, all too often giving up information just a touch too easily; seasoned players will charge through this rather quickly. It’s not often that we hear of games coming out of Transylvania, and it’s nice to see a protagonist who is slightly beyond the norm, if even only a little bit. But while Gibbous isn’t exactly anything special it’s certainly a considerably good first effort for the Romanian developer and I hope it gives them confidence for future titles. I guess in a way the game’s title reflects this effort, in that it showcases their talent but it’s partially obscured, so I’m really looking forward to seeing what else comes from them.

A little too easy
Great character under utilised

A solid first effort from the Romanian outfit, a good narrative just let down by some overly simple puzzling