Guardians of the Galaxy: The Telltale Series – Episode 2: Under Pressure Review 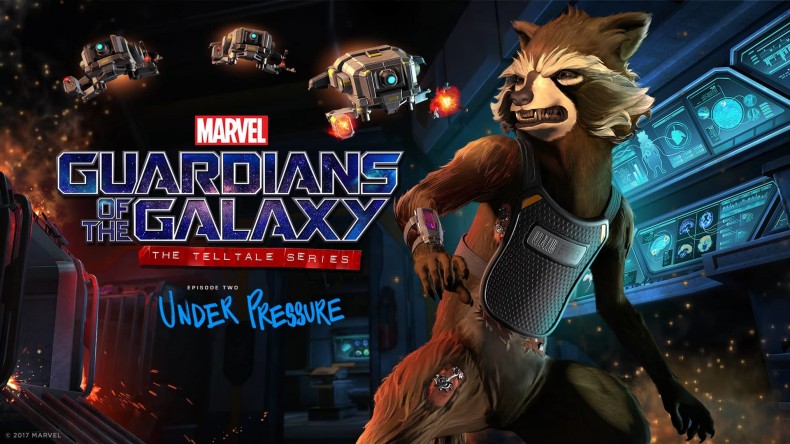 *This episode features spoilers for episode one

After the first episode, I felt like I was done with Telltale, at least for a while. Too much of anything isn’t always a good thing, and the episodic formula has started to feel stale. I’ve played so many Telltale Games that they’re becoming less of a treat and more of a chore, however, Under Pressure is a much better entry, and features some great character development. One of the best voice actors in the business, Nolan North, gets to shine in this episode, bringing Rocket Raccoon’s past to the forefront and nailing his brand of surliness and arrogance, but bringing out his softer and more vulnerable side onto the screen.

After Star Lord’s death, and subsequent revival at the end of Tangled Up in Blue, the true power of the Eternity Forge is beginning to become more apparent, and with that, the team try to uncover what it can really do. The problem is, the Cree want it back, and are in hot pursuit of the gang. We get to see more of Yandu, and his southern American twang is a welcomed return, with Mark Barbolak sounding just like Michael Rooker from the movies. Nebula is also in Under Pressure, and her love/hate relationship with the Guardians is an important part of the episode. No characters are here for the sake of it, and the story Telltale is telling is formulating at a great pace. My favourite character in Guardians of the Galaxy is Rocket Raccoon, and we find out more about his time being tested on at an undisclosed medical facility. I’m so used to seeing Rocket as a no bullshit kinda guy that has skin as thick as Thanos’ skull, but when you see the hope in his eyes – the hope that the Eternity Forge might be able to resurrect someone very special to him, it becomes rather moving. Let’s put it this way, I didn’t expect to get so emotional during an interaction between a raccoon and an otter.

Elsewhere, Drax has a few one-liners that fall flat, and Gamora is as grumpy as ever. I’ve warmed to these two characters the least, and it feels like Drax’s jokes are being forced – not as naturally delivered as Dave Bautista’s performance in the movies. Gamora’s role in the team is to be negative and crap all over Peter’s decisions, which doesn’t do anything to help me like her. She wasn’t as bad in episode one, and I’m kind of annoyed she’s turned into the negative voice that she has. Hopefully she’ll come around and end up being the unsung hero of the series.

Under Pressure is rather quiet on the action front right until the very end, when there’s an awesome action scene set against one of the best glam rock songs of the 70s. It works really well, and I couldn’t help but sing along as Peter and the gang went all out, blowing holes in the Cree. The soundtrack has been really good so far, and hearing the next song has become something I look forward to with each new episode. Knowing what the Eternity Forge can do, I’m excited to see where Telltale goes with it. Which character’s will we see come back to life? I’m guessing Thanos will be back, but I also wonder if Peter’s mum will feature, especially as she’s been in the bizarre (and often dull) flashbacks. It’s also interesting to wonder if other members of the Guardians will feature as Rocket did. We know Drax lost family at the hands of Thanos and Ronin, so could we see a Drax-centric episode?

Under Pressure was a great follow-up, and I’m now looking forward to future episodes. The narrative has picked up, and the right amount of time is being given to every character. Let’s hope Telltale can keep up the momentum, and regardless of the poor facial animations and dodgy eye movements, turn this into one of the best series’ the dev has put out.

Much better than the first, episode two features better pacing and more time being given to the supporting characters. I'm now excited to see where things go for the series.

You may also like
guardians of the galaxy: the telltale seriesAndroidiOS

Guardians of the Galaxy: The Telltale Series – Episode 1: Tangled Up in Blue Review