previous
The Town of Light Review
random
next
Guardians of the Galaxy: The Telltale Series - Episode 2: Under Pressure Review
0 likes 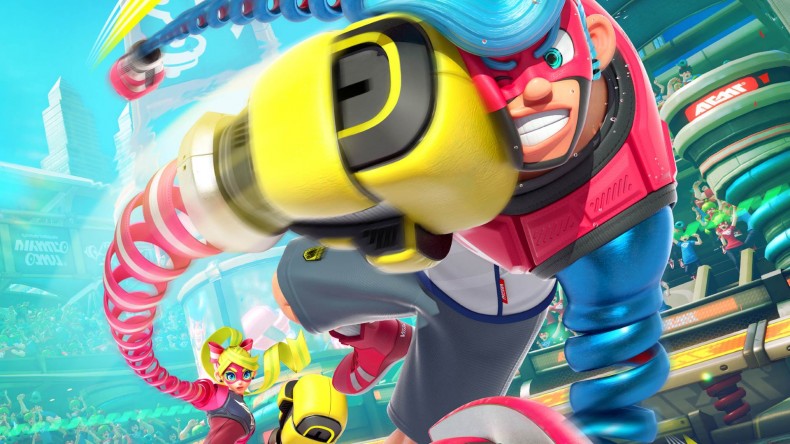 There was a long, elaborate paragraph that originally served as the intro for this ARMS review.

It went into poetic detail about fighting games. “The drama of dragon punches!” it cried. “The blood, sweat and tears that goes into practice mode!” it thundered. “None of these things matter in ARMS!”

Because the intro was going to carefully reconstruct the well-established imagery of fighting games, you see. And after the reader was sucked back into the popular genre learned and loved through games like Street Fighter and Tekken, there was going to be the big reveal that actually – aha! – ARMS is nothing like those fighting games at all.

Just like Mario Kart isn’t really like racing games. You won’t see Bowser players tweaking their gear ratios or adjusting the suspension for Rainbow Road time trials, nor will you see ARMS players spend hours in practice mode grinding counter-hit combos for when you trap large hitbox characters against a wall.

The intro was pure word pornography, the sort of verbal sorcery that wins awards and makes the Oxford English Dictionary shrivel with fear. Anyway, that intro has been ditched for this new one: ARMS is basically Wii Sports Boxing where the boxers have long arms.

There. That’s it. There’s your intro. Because that’s essentially what this game is. And it’s a good thing too. While ARMS only just limbos into the fighting game category by the slimmest of margins, it feels fresh, vibrant, and relevant because of how unusual and different it is.

So, dry explanation time: ARMS is an arena fighting game where players attack each other with comedy, oversized arms (ARMS! See? Hence why this isn’t called KNEES or EARS or whatever).

Before each fight, you choose your left and right arms from a selection of bombs, boxing gloves, spinning discs, lasers, rockets and so on. Each arm only has one attack and they vary enough that it’s important to consider the combinations you take into battle with you. For example: pick the giant bomb arm and you can absorb attacks as you punch, with the disadvantage of it taking ages to recoil back into place when you miss your target. And you will miss a lot, because like boxing, you quickly learn that movement is the skill that dominates play.

But smart movement trumps all. Clever use of jumping and dashing to the side means you’re free to attack your vulnerable opponent, as you aren’t locked in blockstun. And so you have to learn punch curving to keep up with skittish players, adding another layer of strategy on top of the core guessing game.

ARMS default controls have you putting a Joycon in each hand and throwing actual punches with them. Even though motion controls tend to lose out to ‘standard’ controls in fighting games where precision is paramount, motion controls are actually the best way to play ARMS. Why? Because you can twist the Joycon after throwing a punch to curve your attack left or right, so you can second-guess your opponent’s movement by predicting how they’ll try and avoid your attacks. You can do the same on standard button controls but it doesn’t feel quite as fluid or instinctive, and can only be done with one arm at a time. Battles in ARMS start as long-distance jousting matches. You poke and prod your opponent from afar, trying to bully them into dropping their guard or a panicked evade that leaves them vulnerable. Attacks land, both players close distance and the action becomes more and more frantic.

When both players have a fraction of their health left, it’s brilliantly tense – who will risk an attack first? Is it worth gambling on throw to beat the nervous opponent hiding behind block? Maybe it’s safer to wait and see what happens? All it takes is one missed punch from either player to trigger frenzied arm waving, screaming, dashing, swearing, flailing, falling, crying, sobbing, swearing some more, apologising, apologising again, explaining you didn’t really mean to say that, apologising one last time just to be on the safe side.

It is multiplayer gaming at its best as it brings our worst, unleashing the competitive monster who lies dormant in us all.

There’s plenty of extra nuance to the fighting too, which starts at the character select screen. Each weird and wonderful fighter brings something unique to the fray – Ribbon Girl’s multiple jumps in the air, Helix’s odd swaying and ducking moves, Mummy Master’s damaging throws and ability to self-heal, and so on.

Then there are further mechanics to keep things interesting. Catch an opponent blocking too much and you can disable their arms, stopping them from blocking and even attacking for a while. Arenas feature different levels, moving platforms and side walls you can jump off, adding extra spice to the battle over evading and counter-attacking from the right angles. Items such as bombs and health refills drop into the arena, adding quickfire should-I-go-for-the-health-refill-even-though-I’ll-probably-get-smacked-in-the-face decision-making to the chaos. As a final mechanic to consider, you also build meter towards a Super/Special/Punch-Flurry/Ultra Flail Move (delete as appropriate) as you fight. Activating this move boosts your damage and lets you throw a quick number of punches, making it the perfect way to take advantage of an opponent who’s dropped their guard. The tensest moments in ARMS come when both players have Super and no health left. It’s one of those situations in gaming where you feel your arsehole shrink up with nerves, as you wait poised to strike and anxious you might make a mistake, cold beads of sweat forming on your forehead.

While blocking, throwing, dodging, and building super are staples of a traditional fighting game, it still feels strange calling ARMS that. You don’t need to memorise frame data or march into battle with Red Bull-soaked reaction times. All you need are two arms and a willingness to flail, and you slowly fine-tune your strategy, skill and even flailing technique through experience.

That’s why ARMS succeeds. You can just pick Ribbon Girl and punch people in the face, not having to worry about match-ups or special moves or combos. It’s captured the multiplayer drama of fighting games and mixed in Nintendo’s accessibility and polish. It’s a larger-than-life combination.

Which is why it’s such a shame that the overall package lacks meat outside of its versus mode. The main affair is a simple run through the game’s characters in a series of 1-on-1 fights with mini-games sprinkled in. There’s V-Ball (volleyball), Hoops (basketball), 1 vs 100 (you versus an army of low health bots) and Skillshot (hitting moving targets) and they work well to mix up the fighting in Grand Prix.

As standalone affairs, however, only V-Ball shines. V-Ball is bloody brilliant, to be fair. The frantic last-gasp saves to keep the ball alive makes it an excellent multiplayer distraction from the main event. But the rest are strangely tedious mini-games, capturing neither the strategy or the chaos of ARMS’ multiplayer drama.

But that disappointment isn’t enough to puncture the rampant joy of the fighting in ARMS, which thrills from your first curious trip around the character select screen to the last-second knockouts that win you the match. It’s motion control done right. It’s fighting games done differently. It’s Wii Sports Boxing with long arms.

Most of all, ARMS is a fantastic game and it’s an essential purchase for all Switch owners.

Excellent multiplayer fun
Everyone can play it
Surprising amount of depth

The fighting game that everyone can play, ARMS is Nintendo multiplayer gaming at its best.