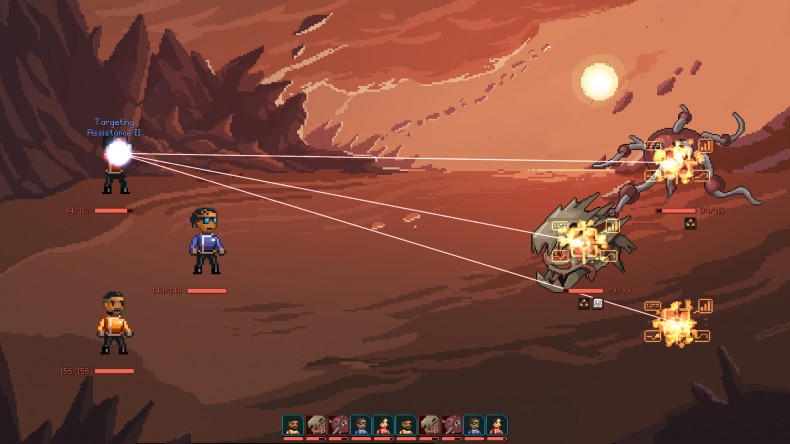 Human supremacy is awesome. The New Terran Federation has spread across the galaxy and risen above the squabbling alien factions to take its rightful place as the most dominant force in known space. Dozens of interstellar colonies harvest valuable materials and dark matter to further elevate humanity and aid in its glorious discoveries. Chief among these discoveries is Halcyon 6, an abandoned star base built by a mysterious precursor civilisation. You are placed in charge of uncovering the secrets of Halcyon 6,and that’s when things go tits-up for humanity.

Strange rifts open up across Terran space and the bizarre living alien ships of the Chruul (who are legally distinct from Games Workshop’s Tyranids) pour from them and tear the Federation fleets asunder. As the highest ranking survivor of the Federation Navy it is up to you to search for survivors, uncover the secrets of Halcyon 6 and defeat the invading Chruul forces.

To this end, you’ll be training up a pool of officers to run your star base, captain your ships and combat enemy forces on the ground. Officers come in three flavours; tactical, engineering and science. Tactical officers are combat specialists, science officers focus on healing and engineering are, for the most part, a hybrid of the two. These brave souls are the backbone of your operation and as they level up, they’ll be able to take on more significant roles and command bigger and better vessels. There’s also permadeath, so you’ll want to keep risks to a minimum if you can. Rooms on the star base can be explored and excavated in a similar manner to XCOM 2; you assign an officer to oversee the operation and after a few in-game days you will be rewarded with some materials, XP, and a new building slot for you to construct an upgrade. And Halcyon 6 loves its bloody upgrades. There are dozens of them for every facet of the game. Occasionally your intrepid space folk will stumble across some unfriendly wildlife that has made its home in that spot you’d earmarked for a fuel production facility. Time to shoot them in the face.

Combat is classic active time battle with a focus on a variety of exploitable debuffs. Most attacks will cause a status effect, such as bleeding, confusion, etc., and many other attacks can exploit that status effect for bonus damage. Having a squad with abilities that complement each other in terms of debuffs and exploits is the key to victory in combat. Unfortunately, it makes the combat almost trivial once you’ve prepared a decent team of officers. Space battles play out in exactly the same way. Initially using the combos is fun, but no matter which enemy ships or ground units you are fighting, the abilities used to destroy them will be the same. With my main fleet I always disabled the most powerful ship and then used Crippling Shot and Flak Cannon to focus down individual targets. Similarly, in ground combat my tactical officer had Frag Grenades that inflicted bleeding on every enemy, which was then exploited by my engineer to devastating effect. There are lots of combat abilities in Halcyon 6, but most of them amount to using the same tactics but with differing particle effects. You will be fighting a lot in the early game as rifts will continuously open, spaffing Chruul fleets all over Terran space. They’ll attack surviving Terran installations that will trigger a mission for you to protect it. After a brief scrap you’ll be given the option of evacuating the installation or alternatively, you can manually fly one of your fleets over to it every five minutes or so to collect resources and send them back to base to collect them. Which is about as fun as it sounds. This is surely intended as a risk/reward mechanic; you can get a steady flow of resources but you must protect it for the long term. But ferrying dark matter around is such mind-numbing busywork, I evacuated every outpost I rescued to avoid this particular pain in the arse. I compensated for this by constructing resource buildings at my base. This lead to another problem however: the problem of waiting.

There’s a UI button I clicked on more than any other in the time I spent with Halcyon 6 and that is the advance time button. Every task you assign to an officer, every time you choose a destination for one of your fleets, every time you want to construct something it takes a number of in game days. But if you eliminate the busy work of manually ferrying resources as I did, you’ve got sod all to do except click on that advance time button between every action. I felt like I spent more time waiting when playing Halcyon 6 than anything else.
Bizarrely, given the game’s apparent obsession with making you wait for absolutely everything, technological research is completed immediately. Want to develop new building types? Done. Want new ship blueprints? Done. Want to look at the ships’ potential abilities and equipment before spending resources to develop the blueprints? Actually that can’t be done for some reason. Sorry. It’s not just you and the Chruul in the universe, of course: there are a few pirate fleets and neighbouring alien factions who will pay you a visit periodically throughout your campaign. They offer charming distractions from the core of Halcyon 6 but, like everything else on offer, the diplomacy system is tissue paper thin. Occasionally a fleet will turn up and offer you a mission, present you with a gift or pick a fight. Those are the three possible outcomes from visiting their home worlds, too. It’s such a shame that once that initial charming veneer fades, the universe you are playing in just feels empty and lifeless. Random events do offer some spice every so often, presenting you with multiple choice dilemmas, very much in the spirit of FTL, which can have hilarious repercussions further down the line.

Halcyon 6: Starbase Commander fancies itself as combination of XCOM, FTL and Star Control with early Final Fantasy style combat and a healthy dollop of Star Trek flavouring. Unfortunately, it falls short of reaching the heights of any of its influences. Despite the sheer volume of options, upgrades and ships to play around with it rarely, if ever, provides you with interesting decisions to make. After a promising start, it quickly descends into an exercise in busywork or more downtime than a submarine commander.

Plenty of options and upgrades but no genuinely interesting decisions to make
Grim choice between vapid busywork or far too much downtime.
Combat quickly loses its luster

It feels like a missed opportunity. It starts okay, but it’s not long before the downtime or micro-management begin to push the enjoyable segments of gameplay further and further apart.