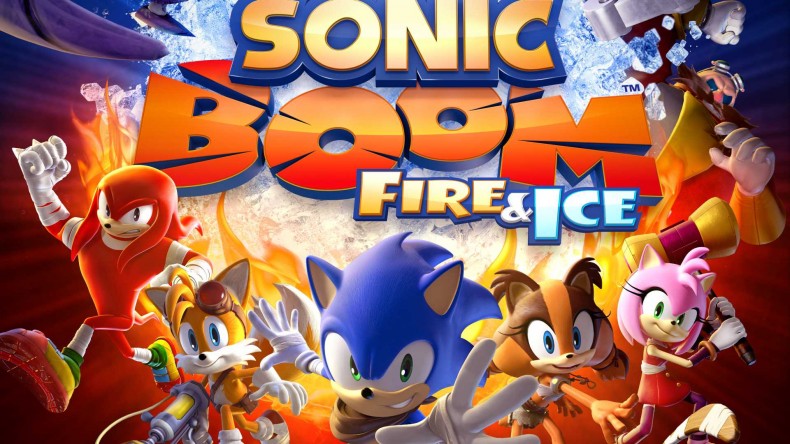 The Sonic games on the Mega Drive easily stand as some of the greatest of all time, bringing colourful worlds, varied stages and a wide range of enemies to jump on top of and explode. It has been a while since we’ve had a brilliant Sonic game, with Mario blazing the trail and providing a constant wave of excellent platformers, leaving Sonic struggling in his wake. I hold Sonic Adventure on the Dreamcast as possibly the best Sonic game of all time, and I’ve yet to see something reach those heights ever since. It has been terribly upsetting seeing title after title release to a mediocre response, but will this game be any different?

Sonic Boom: Fire & Ice brings back the magic of the original platformers, and for a lot of the time you’re enjoying zipping through the beautifully colourful and challenging worlds with a great sense of freedom. Dr Eggman has discovered a new element called Ragnium, and he’s using it to build an army of robots to outrun our titular blue hedgehog. Along with the threat of the fat despot with a moustache, one of his rogue robots has gone bonkers and is also causing a problem for Sonic and his friends. Ragna Rock has a wide range of levels, and you’re constantly shown a variety of different challenges. The standard platformer exists and is full of fast-paced movement and fast-thinking decisions to make. There has been a lot of effort made by Sanzaru Games to make each level varied, throwing in plenty of bad guys, moving platforms, disappearing platforms, boulders, spikes and much more. Along with the side-scrolling action, there are levels where you control a submarine, a boat, race against Dr Eggman on crazy race tracks, and even speed runs that remind you of those moments in Sonic 2 where you flew down those vibrant tunnels collecting enough rings to get the gems.

Not only can you play as Sonic, but all of his friends unlock relatively early so each one of their abilities can help you to overcome every obstacle. You can change between them by pressing the touchpad, which is handy as there are times when you need to skip between Amy’s hammer and Tails’ laser gun, before burrowing into the ground with the muscly brute, Knuckles. Each character feels varied and they all offer something new to the game, and even if you’re not really familiar with characters like Amy and Sticks, they are great to control and add to the fun of the Sonic universe. Fire and Ice aren’t in the title for a laugh; instead they play a pivotal role in getting through the game. Pressing the L or R trigger changes the orb around your character to an icy or fiery glow. There are obstacles and platforms in Sonic Boom that can be frozen or melted depending on what you need them to be to progress. They vary your skill set and add another layer to gameplay, but there’s not really any other use for this ability, and you’re not required to use them for much else. With the speed you can sometimes travel through the game, managing to freeze and melt blocks can prove tricky, especially with speed runs so even though they may not be present for any other reason than barricades and platforms, they do offer a bit more than what you originally use them for.

Along with the standard ring collecting you’re used to, you can collect trading cards to take to Tails’ workshop so you can upgrade and build bot racers to challenge other gamers online. There are junk parts you can collect and take to Sticks’ Burrow, and hammer fragments to use at Amy’s House. Want to listen to the music or watch cut scenes from the game? Head back to Sonic’s shack and do just that. All of these challenges and options give you more reason to explore each level and find all of the collectables, so there’s plenty of replayability even after you’ve tried to get the fastest time.

Sonic Boom: Fire & Ice is a great little game with plenty of things to do. The gameplay and the fluidity of movement are very appealing, and changing abilities and characters is very easy to do. It somehow feels like a return to form, and even though the performances by the cast of characters are a bit ham-fisted and embarrassing, they’ll do plenty to entertain Sonic’s younger audience. I’m genuinely surprised by how much I enjoyed playing Sonic Boom: Fire & Ice; it’s colourful, fast-paced and lots of fun.

Fire & Ice feels like a real return to form, with well-designed and vibrant environments matched with varied, exciting challenges throughout.