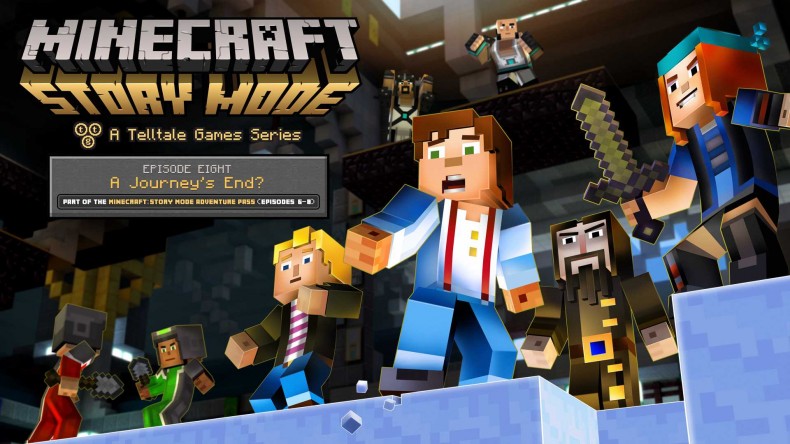 We have come quite a distance in our journey with Jesse and crew, from surviving and defeating the Wither Storm in Jesse’s homeworld, to saving the people of the city built in the clouds, solving the mystery behind the crazed YouTube personalities and even fighting a rogue AI in the last episode. Now with A Journey’s End we are finally at the last step of Jesse’s adventures with his friends.

It feels like this ending has been a long time coming, and in some respects has been well over-due. The standalone episodes since the culmination of the Wither Storm narrative have felt a little disconnected from the decision-based nature of TellTale games and I really felt they exposed the futility of the structure. Nevertheless, the individual stories themselves have been entertaining at least, and A Journey’s End is no exception.

The last episode hinted that our team would finally be able to return to their homeworld once one final hurdle was overcome. Harper, one of the “Old Builders” our friends found in Access Denied, told Jesse of a way to find the right portal to take them home: locate the other Old Builders, find the portal atlas and go home. Simple. One of the things I have enjoyed about Minecraft: Story Mode has been the gentle referencing of the source game. Right back at the beginning we were treated to a journey to the Far Lands with a montage of all the new biomes that had recently been released on console versions of Minecraft, and in A Journey’s End we are given a tale woven around the recent release of the battle mini-games as well as some pop culture references to things like The Hunger Games, where a sadistic crew of people force others to play in violent games for their amusement.

Our team are thrown right into one of these games, a large arena of snow blocks built over a pit of lava with a huge mechanism that crushes anyone unfortunate enough to fall. This is Minecraft though, and a game designed for kids, so death is not final. Every character that fails “respawns” in a holding arena and is then forced to work in the quartz mines until they are allowed to fight again. It’s a surprisingly grim theme, but Minecraft: Story Mode hasn’t been shy with some of the darker stories it has told. The battle is already in place and Jesse and his team must act quickly. What follows is another story where Jesse is forced to make decisions to keep his friends safe, while also saving the enslaved people of this world and overthrowing the tyrants that run it. It’s a familiar tale, having been done in every episode since Order Up.

Familiarity aside, the tale isn’t without fun. There is an extended QTE sequence that requires you to guide Jesse through a gauntlet of lava, jumps, sword fights with gladiators and a climbing sequence. It is an exciting section and forces you to sit up and pay attention; sadly however, the rest of the tale isn’t given enough time to really flesh out its ideas.

It feels like each episode has become shorter and shorter, and unfortunately with A Journey’s End a lot of the ideas aren’t given breathing room. There is a promising section where Jesse has to decide who of the new people he encounters he can trust, as well as an interesting story about a former competitor who managed to beat the system in the past, but it is over before it ever really begins, and without allowing any time to build up the interesting and compelling backstory it becomes really hard to care about the outcome. Not that I have seen my choices impact the outcome in any meaningful way anyway, since the culmination of the original story with the Wither Storm. I’ve touched on this a number of times over the past few episode reviews, and it is apparent again here: the contained mini-stories, while entertaining, don’t work as well with regards to the decision-making elements that a longer narrative spread over a number of episodes does. Ultimately, what the different choices amount to is all revealed at the end, when you find out whether you were one of the 72.3% of people that chose X over Y. Purely as a means to move the plot along, or to make you feel like you have some impact on the story, they are rendered entirely redundant and feel more like something to keep you physically involved in the story by making you press a button, rather than significantly shaping it in one way or another.

The end itself was pleasing, managing to reminisce about all the adventures Jesse and his/her friends have been on over the course of the eight episodes, but overall A Journey’s End feels a little under-whelming for potentially the last time we see this group of characters. Decisions made over the course of all entries in the series feel a trifle redundant, and while there are entertaining sequences over the course of the play time, I am not sad to say goodbye to Jesse and friends.

Exciting QTE events
Nice tie up with all the episodes

A Journey's End is a lacklustre ending to Minecraft: Story Mode and further reinforces the idea that the series should have stopped after episode four or five.