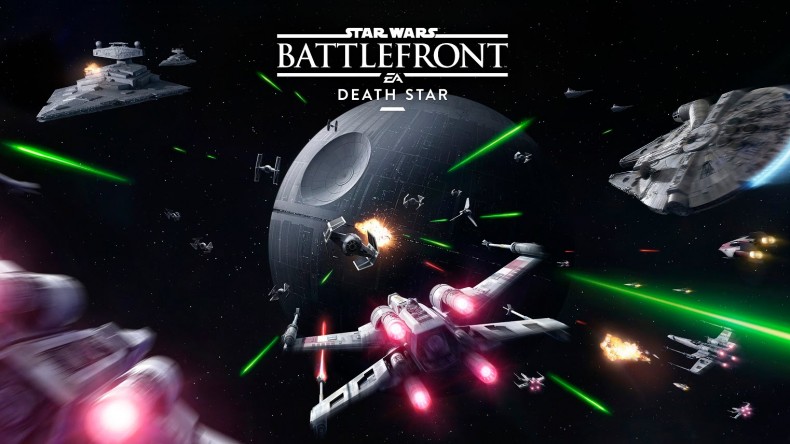 Arguably the DLC most people have been waiting for, Death Star, the third and penultimate DLC for Star Wars Battlefront at first glance doesn’t disappoint. Frenzied dog fights in X Wings and TIE Fighters over a beleaguered Star Destroyer, along with the iconic trench run from A New Hope is, for many fans, the stuff of dreams. DICE has taken great pains to recreate a breathtaking spectacle that perfectly captures the look of these famous, beloved set-pieces, but is it enough to save the reputation of a game many are disappointed in overall?

The DLC itself comes with three main modes: Fighter Squadron, Blast and a new three part skirmish mode called Battle Station. The three phase game type is fun, if a little disjointed. It starts in space amidst the debris of a ruined Start Destroyer and within sight of the titular Death Star. The task is to either destroy or protect a remaining Destroyer in an aerial battle. Much like the vanilla game’s Walker Assault mode, teams are required to perform actions that call in Y-Wings to temporarily render the Star Destroyer vulnerable. Once it is destroyed, the battle moves inside the Death Star where the rebels must rescue the astrometric droid, R2-D2.

The Death Star section is very tightly packed with narrow corridors and automatic doors that slide open and closed creating a wonderful sense of unpredictability. I’ve lost count of the amount of times I aimed a grenade through an open door to hopefully wipe out the enemies laying in wait, only for it to bounce back off the door as it closed, killing me instead. Battles are well contained across recognisable areas of the Death Star and are frantic and fun as teams try to co-ordinate attacks and defence. If the rebel team are successful and manage to escort R2 to the extraction point, the third section of the game type kicks in, which is the iconic trench run section to destroy the Death Star. This section is another aerial battle with the Imperials and Rebels battling it out above the trenches while selected players try to carry out the run through the narrow trenches. As fan service is absolutely glorious, with all of DICE’s visual talents on display, but at present it is rarely seen as the rebel team often fails to escort the droid to safety. This will no doubt change over time as players become more familiar with the map layout in the Death Star section, but at present it feels like you don’t get to see everything the DLC has to offer.

Battle Station mode aside, the DLC itself feels a little small. The maps appear to have only been made for Blast, the team deathmatch mode, and plain old Fighter Squadron which takes place over the Star Destroyer or the trenches of the Death Star. With the addition of new heroes Chewbacca and Bossk, it’s a shame that there is no hero specific mode with which to properly get a chance to try them out within the narrow corridors of the Death Star.

Elsewhere in the DLC there are new Hutt contracts encouraging interesting and different ways to play the game to unlock new weapons and star cards for your customisable hands. There are also new characters to unlock and diorama pieces for the collectors. As with the previous DLC entries, these updates are available for the vanilla version of the game too, making the whole package a much more interesting prospect for newer players. As with the Outer Rim and Bespin packs, Death Star has its own separate playlist which only serves to dilute the already dwindling player base even further. At present the population in Death Star is pretty sizeable so getting a game isn’t any trouble, however as an experiment I tried to get into a game in the Bespin DLC and after ten minutes of sitting in a lobby with only myself and one other player I gave up. With the final DLC due in December, I fear that season pass holders will be left with a game that essentially has five distinct components that are not connected with each other, and each with its own population of players. As a game and cohesive collection of expansions, the way the DLC has been delivered doesn’t really add up. I’d like to see in the future a merging of the expansions so that all the content can be accessed as one complete game, something EA and its associated developers has been working on with some of the other titles. Splitting the player base between the haves and the -ots has never been good for the longevity of a multiplayer game, and further dividing that down into individual downloadable playlists seems ludicrous to me, especially as, in the main, Battlefront does deliver on the bite-sized chunks of online shooting and more than delivers on the spectacle of a Star Wars game.

Death Star is the best expansion so far for Battlefront, not least because it finally makes good on what many fans of the original games wanted in the first place. The new Battle Station mode provides a tense, and exciting campaign with a shifting narrative depending on the success or failure of your team, while the inclusion of the new heroes and additional content across the base game adds further meat to the bones to attract new players. As a standalone piece of content, DICE has further demonstrated its knowledge and respect of the source material with outstanding visual and audio direction, but I do fear for the longevity of the game if the DLC continues to segregate players into different funnels of content.

Further dilutes the player base
Lacks a Heroes-specific mode

Death Star is the best expansion so far for Battlefront, but the way the DLC as a whole is presented only further segregates the player base.