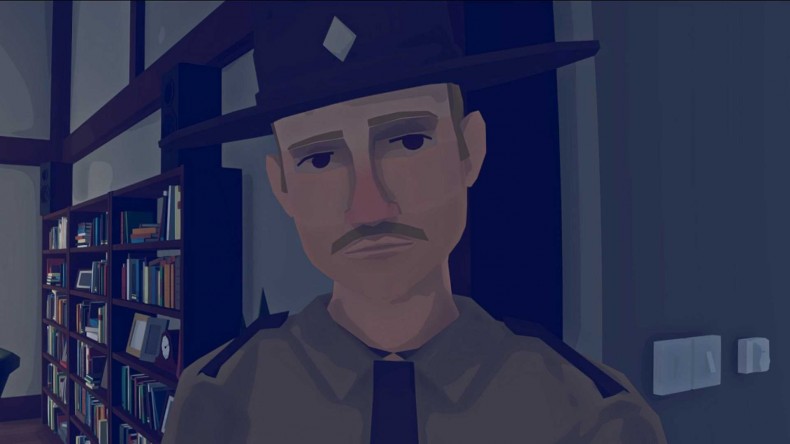 I remember watching Mulholland Drive for the first time and being completely affected by it; as the credits rolled my mouth was wide open, my heart was pounding and not a single one of my emotions was in check. I had been changed by cinema – by a film that said so much without saying anything at all. Virginia is an ode to Lynchian cinema, a compound of the delicate nature of trust and love and the vulnerability of the human psyche. It is a masterpiece in storytelling, sound design and visual fidelity, building a thing of beauty that many developers should take inspiration from. Like my reaction to Mulholland Drive, Virginia has changed me.

In Virginia, you play as Anne Tarver, an FBI agent tasked with uncovering the mysteries of a missing boy in the quaint town of Kingdom, Virginia. Not only that, but you are investigating fellow agent, Maria Halperin, for reasons you’re never really sure of. As you meet a range of different characters, you’re left trying to work out what the hell happened and who’s got something to hide. The tale takes a turn for the surreal, paying homage to more of David Lynch’s wonderful body of work like Twin Peaks, as symbolism through the bizarre takes centre stage. You’ll be sitting in the passenger side of a car, having breakfast at the kitchen table or standing in a lift, and then suddenly you’re transported to a completely different setting. The story takes place over a week and it packs in so much. Instead of seeing the whole car journey through or a walk through someone’s home, you cut to the next scene, then the next. Fragments of narrative move Virginia along at a nervous pace; you’re never sure when you’ll be ripped out of a scene, never allowed to relax or appreciate a moment in case it’s taken away from you. It’s such a smart notion and you’ll either love the artistic direction or lambast its very inclusion, but you can’t ignore the boldness of trying something different.

Much like Firewatch or Everybody’s Gone to the Rapture, you have very few actions. You’ll walk around, pick up a drink, look in a glove compartment or open a door, never doing much other than walking to something and interacting with it. The simplicity of the controls helps you to absorb every ounce of the story, never taking your focus away from what’s going on.

Possibly, Variable State’s greatest achievement is managing to tell such a complex story without any of the characters ever saying a word. Instead of listening to a character’s thoughts or feelings, you’re left reading their expressions and more often than not, they can be more crippling than a thousand words. You’re made to feel such a range of emotions, and the silence behind Virginia’s most passionate scenes does so much more than any dialogue could. There’s a scene in a motel bar that moved me beyond words, and the way the music plays a role in it is utterly brilliant. Lyndon Holland’s score is emotionally resonant and powerful. It’s Virginia’s sixth man, managing to be its own character with passion running through its veins, providing insight into Kingdom, into Anne and into the crazy world you’ve been made a part of. The music was recorded by the Prague Philharmonic Orchestra, at the same studio where the soundtracks for Lost Highway and Mulholland Drive were recorded. Virginia has one of the best game soundtracks I have ever heard and it stays with you for some time afterwards, much like the story itself.

Virginia really did a number on me. Behind the complex story lies a simple tale of friendship and what we do in the name of it. Anne’s journey from beginning to end is full of ups and downs, breakthroughs and breakdowns. She’s such an interesting character and you’re never sure where her head’s at until the end, but her relationship with Halperin is moving and important.

It certainly helps I’m familiar with David Lynch and his style of cinema, but it’s a disservice to say Virginia isn’t its own game. Yes, it draws a great deal of influence from his work, but it does so much on its own and builds such a vivid and interesting world by crafting such a fantastic narrative. The ending and its build up will confuse just as much as it’ll astound, and I’m still thinking about it now. Even though it’s only a couple of hours long, Virginia will leave a huge impression on you

There are very few games as emotionally affecting as this. The story is thrilling, powerful and thought-provoking, and the music sends chills straight through your soul.