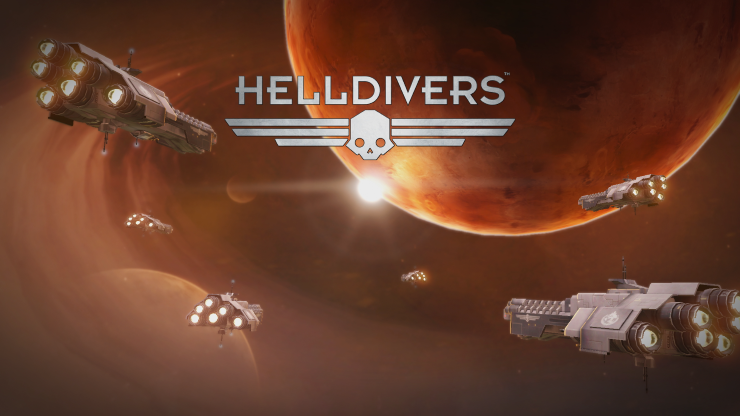 If Destiny and Starship Troopers were to meet in a crowded bar, fall in love and produce a little shooty, explodey, sci-fi coloured egg, Helldivers is what would emerge, shouting and blasting, a few weeks later. Arrowhead’s game cherry-picks elements of several sci-fi franchises and shooter sub-genres and rolls them altogether into one of the most addictive and mean-spirited little blasters of recent years.

It takes place in the year 2084, where the forces of “Super-Earth” attempt to enforce “managed democracy” on the alien races of our galaxy, and are locked in perpetual war with them as a result. The elite fighting force of Super-Earth is the Helldivers, called so because they literally dive into combat zones in one-man Hellpods. Once on the ground, there are a number of different objectives to complete to pacify the enemy, all of which involve shooting the hell out of stuff.

The missions are procedurally generated and have eight difficulty levels ranging from “a dive in the park” to “Hell-dive”, and each one can be attempted alone or with up to three others. Action takes the form of an isometric shooter, with the left stick moving you, and the right stick aiming your current weapon. Grenades, melee, and shooting are mapped to three of the triggers, while the fourth allows you to call in Strategems. These are cooldown-restricted buffs or gear drops that must be summoned by a D-Pad combination, and include anything from ammo packs to stationery guns, mech suits, airstrikes, heavy weapons and nukes. If one of your fellow Divers is killed (which happens with alarming regularity), you’ll need to summon them back by using the Reinforcement Stratagem. You can take any combination of four Strategems into a mission, but they must all be unlocked by levelling up your Diver or liberating planets. The more troops you take with you, the harder it is, so it can become incredibly frantic on higher difficulties when supply drops, stationary guns and battle tanks are slamming into the map left, right and centre.

At its heart, Helldivers is a social game. The war effort is a global concern, and remains constant for all players on all PlayStation platforms. A countdown timer gives you a window within which to attack the homeworld of one of your three enemies when they’re weak enough, a condition reached by earning influence in the relevant star systems. It creates a sense of camaraderie, even when you’re not playing, ensuring that the world feels shared despite the instanced nature of the missions.

The hub of your individual war effort is the bridge of a warship, and in a nice touch you can see ships of any other players currently in orbit of the world you’re diving to when you head off on a mission. From the bridge you can access the armoury to upgrade your weapons and Strategems or change your appearance, read the in-game encyclopaedia or choose a mission. Selecting Galactic Campaign will allow you pick a world to conquer solo, although others can join your game at any time by choosing the Multiplayer option from the bridge. This menu provides a list of all the missions currently in progress and lets you dive in instantly. If you help to complete a mission, you’ll reap the rewards, too. The beauty of Helldivers is the minute to minute gameplay. Playing alone is fun, but the sense of instant camaraderie when another player’s Hellpod slams into the ground is genuinely thrilling (you even have a Strategem that will prioritise you in the multiplayer list). Voice-chat is enabled, though not entirely essential thanks to simple social emotes on the D-pad, all of which are infinitely more useful than waving, pointing, sitting and dancing.

Communication of some kind is necessary, however, notably because Helldivers hates you and wants you to die. Friendly fire cannot be turned off, which on paper sounds horrific. In practice, though, it’s genius. Rather than a mindless blaster, Helldivers forces you to be aware of your allies, use controlled gunfire, mind your positioning and form defensive and offensive lines. Equipment drops, reinforcements and even the evac ship can and will instantly kill any Diver caught underneath, so you must keep your wits about you at all times.

Every mission follows the same pattern: drop in, secure objectives, call the evac shuttle and wait 90 seconds for the cavalry to pull you out. You can avoid friendly turret fire and shrapnel by diving into a prone position, and there is cover dotted here and there, but your best asset is common sense. Teaming up with careless, reckless or plain stupid players will just get you killed and reduce your XP bonus – or fail the mission entirely. Sadly, despite the option to kick players, it is a game that seems built for people to suck the joy out of simply by being dicks. A variety of objective types include arming S.A.M sites, transporting a high value briefcase to a base, or capturing a designated area, and each mission contains random combinations of each. It’s safe to expect more mission types, enemies and locations in future DLC and frankly, I’m all in. Despite occasional frustrations due to misfiring tram mates or being in the wrong place when a Strategem drops in (I was killed one time by an ally dropping in seconds after stepping from my own pod), Helldivers is a hugely-addictive, incredibly playable shooter. It doesn’t look particularly impressive, even on PlayStation 4, but the fairly simple visuals mask a devilishly tricky little blaster with an enviable level of accessibility. The Vita version, while just as much fun, is less celebrated given the ropier visuals, noticeably longer load times and the fact that, for some reason, Arrowhead mapped the grenades and reload commands to the dreaded rear touchpad, making grenade use in the field an utter pain.

Minor gripes aside, Helldivers is an instant multiplayer classic, mixing the teamwork of Destiny with the shooting set-up of Dead Nation and the sci-fi style and humour of Starship Troopers. The cross-platform chat and saving makes it accessible to all PSN gamers, meaning there should be plenty of people playing for a while to come. Happy to be hardcore, Helldivers is a great shooter to play alone or with others.

A badass little blaster that's not afraid to be hardcore and treat you like a whiny little child, Helldivers is most fun when you and your teammates work together.