Hellmut: The Badass From Hell review 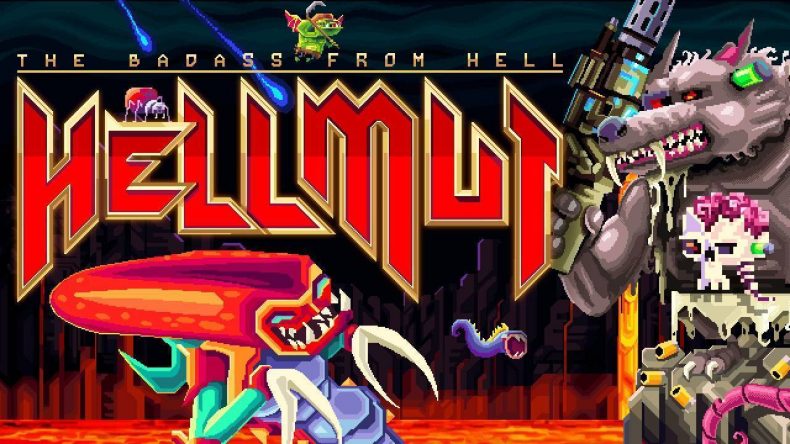 Hellmut is a stereotypical mad scientist who wants to live forever. Rather than attempt to cure ageing or create a regeneration serum or any of that mundane nonsense, Hellmut instead goes down the Doom route and open a portal to Hell.

Rather predictably, it ends badly, when the demon he summons grants his immortality, but also reduces him to just a skull. Luckily (sort of) for Hellmut, a second demon comes along and gives him the opportunity to get revenge by way of frantic, wanton slaughter.

What follows is a game about shooting everything in the face while avoiding being shot in the face yourself. As each run begins, you can select from a handful of “higher” forms, such as a giant rat with a cannon that fires bouncing bullets, a Stitchmonster (read: a Frankenstein’s monster) who hurls a giant hammer around the place, and a skeleton who likes to set things on fire (though you’ll need to unlock them as you progress). Losing all your HP will result in your transformation back into just a skull, which as you can imagine renders you somewhat weaker and more susceptible to the aforementioned face-shooting, since your face is the only thing to aim at. If you can survive for long in this form, then kudos, as it’s usually only a matter of time before one stray bullet too many finishes you off and you go back to the beginning. In true roguelike fashion, death is more of an inconvenience than a real hindrance though, as important landmarks you’ve discovered will remain on the formless map, giving you an indication of which direction to head each time.

There are several items and portals worth discovering, such as a shop where you can trade gold for power-ups and weapons, and there’s even an option to resurrect your higher form for a hellish amount. Bumping into your demonic benefactor will also allow you to spend collected crystals to enter a bonus realm for increased benefits.

While Hellmut: The Badass from Hell can become repetitive quite quickly – especially if you’re having a bad day and your runs aren’t lasting very long – the fact that it gets you back to the action within a few minutes is a bonus, though the loading screen before each run is a bit of a momentum killer. It also looks pretty good, with an aesthetic not entirely dissimilar to old school Doom. Don’t let the pixel art fool you, it runs as smooth as butter and presents a stern challenge for even the most discerning bullet-hell connoisseur. There’s a decent variety of enemy types who can spawn through a given area, as well as spike and blade traps to avoid. There’s such a mix of enemies and projectiles that it’s a difficult game to second-guess youll always be on your toes.

Hellmut: The Badass from Hell isn’t particularly fresh or original, but it does enough to keep you guessing, and the humour will raise a smile now and then, though it’s too genre-standard to illicit belly laughs. Still, there’s enough challenge and fun to be had if digested in bite-sized chunks.

Gets straight to the action
Different forms have distinct styles

Can become repetitive
Nothing particularly new
Humour is hit and miss