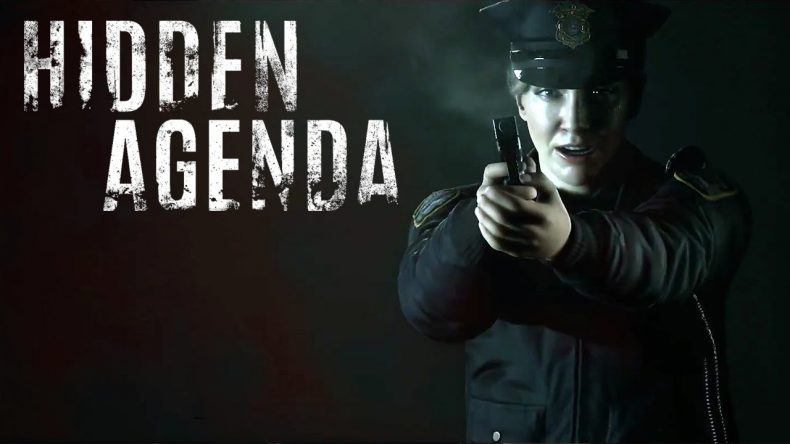 Until Dawn was a game that made you make important decisions throughout – decisions you felt harmed certain characters and helped others, but all felt important and impacting to the narrative. Lots of games tell you your choices matter, but Supermassive really makes you feel that it does, and with Hidden Agenda, once again, your decisions impact the story rather dramatically, except this time it’s done in a new and inspiring way.

PlayLink may seem like a gimmick, and maybe it won’t last, but if games like Hidden Agenda are coming out, the potential stretches much further than a few quiz games. It’s not the greatest game ever, and it does have its problems, but there’s a solid story here, and the characters are well written, with a great pace and movement of the plot.

It’s an interactive movie, give or take a few scenes where you spot clues within a crime scene and participate in a few QTEs and multiple-choice questions, played through two different modes: Story Mode and Competitive Mode. You play as Detective Becky Marnie, a cop who managed to arrest a suspected serial killer known as the Trapper. Five years on, and he’s about to be executed, but two days before he’s due to receive the lethal injection, he claims it’s not him, it never was, and more importantly he knows who it is. This sets off a chain of events that has you investigating different locations for clues, all while your own involvement is questioned by the closest to you. There are times when you must defend yourself, question your own morals, and think about the lengths you’d go to to uncover the truth. The characters are given plenty of depth, even though a single playthrough doesn’t last much more beyond a couple of hours. Both Becky Marnie and District Attorney Felicity Graves are superbly voice-acted, and as the story reaches its climax, you’re left questioning your every decision.

As for the crux of the modes, and your role in the game, it’s played solely through your mobile phone via a free app you download. Story mode is a more relaxed way of playing, where you can play alone or with a group of friends. Competitive Mode is much better, and has you trying to avoid the curiosity of your friends and play them all for fools.

Throughout the game, you’re given two ways to answer a question, and each person can choose one of the answers. If three go to one answer and only one goes to the other, majority rules, but playing a Takeover Card can be laid down which gives control to the person who picked it, meaning their answer is the only one that matters. This means much more in Competitive Mode, though.

Competitive Mode has a player selected at random at the start of certain chapters of the game to fulfill certain objectives, and as you all play, it’s the whole group’s job to find the person who was given the Agenda card. It’s tough to try and find that player, but it’s also a challenge to try and complete the tasks without anyone finding out. It all kind of plays into the way the game is played, and persuasion skills are key to try and get everyone to vote the same way, that’s why Takeover Cards take on a different role in this mode. Story Mode is a much more relaxed way of playing, and it’s the best way to appreciate the story. You’re spending less time plotting your win, and it allows you to enjoy the story for what it is, which is gripping to say the least. It’s intense, dark, and full of surprises, especially in the ways the killer is revealed. Supermassive has managed to make a game that is both fun to play and a joy to watch. The QTEs are bland, and finding the clues are never difficult, but act as more of a way to earn Takeover Cards.

The app for your phone is much more than a controller, and it acts as a reference for plot points and ‘ripple’ effects (decisions you make that affect the story), a place to read up on character bios, and more. It makes the experience more immersive, and means you don’t have to keep pausing or breaking the game’s flow to read up on information about the surprising amount of characters.

Hidden Agenda won’t be for everyone, and the inability to use the controller will be a put off for some, but it’s a great game to be played with friends, even though the frantic nature of Competitive Mode can detract from the interesting story.

It's doing something different as part of Play Link, and there is no better studio to do a crime story using this service, even though some of the gameplay elements are a bit dull.