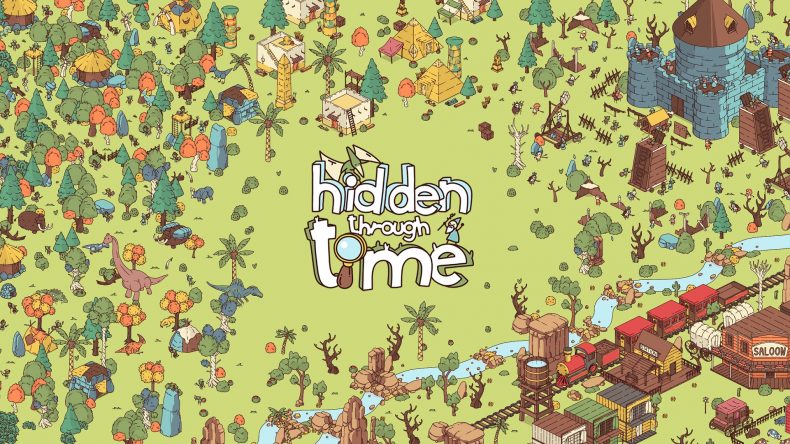 In Hidden Through Time, Crazy Monkey Studios have taken a list of things and hidden them through a number of different levels and worlds. Hidden Through Time doles out massive Where’s Wally (or Waldo depending on where you live) vibes, which is nothing but a good thing in my opinion.

You have 26 levels spanning across 4 different time periods with the objective to find everything on your list. The eras covered are the Stone Age, Ancient Egypt, the Middle Ages & The Old West, each with a little something specific to that time period. For example, in the Middle Ages you may even come across Merlin and a young King Arthur.

Each level gets bigger in size with more things going on to make finding each item that little bit harder. There’s also a light story element in each time period which adds a little something extra to take in while you’re on your search. Luckily you don’t need to find everything on your list to progress to the next level. There is a feature in the options menu to turn this on so that you need to find everything if you’re looking for an extra challenge. There are achievements/trophies for finding everything though so if you’re looking to rack up those numbers this might be something you want to switch on. Each item does come with its own clue, which really helps in the bigger levels. Sometimes they’ll be helpful and mention a certain area, like a farm for example, while other times they’ll be a little more obscure.

I did have a couple of issues with Hidden Through Time but nothing that massively took away from any enjoyment. The first was a framerate issue on the bigger levels. Zooming all the way out will cause it to drop and moving across the screen gets pretty janky. This is sorted by zooming in, which you’ll likely need to do to properly find things, but if you’re trying to just have a look around it can get annoying.

Lastly is the progress not matching with the achievements. I did manage to find everything and clear all the objectives for each world but the achievements didn’t pop up and show as unlocked as of writing this. Personally, it’s not much of an issue for me but I know there are some people who do achievement/trophy hunting and something like this will be a problem. This issue may be fixed on launch, and might only be specific to Xbox, but as it stands they don’t link up regardless of rebooting or trying levels again. Speaking of retrying levels, you do have the option to either reset levels either individually or wipe progress completely and start again. With over 200 items to find you’ll have a hard time remembering exactly where everything is which adds a decent amount of replayability to the story option.

Hidden Through Time also comes with an Online option where players can create and upload their own levels. There were only a few maps that I could try out but what I did play through was really good. I can see there being plenty more post-launch so there should be something new to try every now and then.

The Map Editor for creating these levels is decent. Everything you come across in the story mode is available in the Editor and items from different time periods can be mixed and matched to create a fantastical level. You could have dinosaurs chasing cowboys or knights facing off against someone from the Stone Age if it takes your fancy.

The Editor does feel like it’s more aimed towards PC players as using a controller isn’t as easy as it could be. That’s not to say it’s overly difficult but a mouse would be better suited for editing like this. It could just be me and others won’t have any issue with a controller but it’s not something I’d hold against the game. I also noticed that the music for Hidden Through Time can feel a little repetitive and reminiscent of lift/elevator music. However, when you get right into it, it’s a perfect fit for this type of game. Eventually it melts away and becomes the best companion for the gameplay as it’s not distracting in any way. It’s actually kind of nice.

Hidden Through Time is a simple and relaxing experience that will see you lose a lot of time to it but in a good way. It never feels like a chore attempting to find items and this might be down in part to how lovely and bright the whole game looks and feels. If you’re looking for something out of the norm and very Where’s Wally/Waldo esque then this is definitely worth your time.

Framerate dips on bigger levels
Progress not syncing with achievements

Hidden Through Time is an absolute gem of a game. The basic idea is simple but couple that with the scale of the levels and some of the obscure hints it’ll provide plenty of hours of hide and seek fun. A must have for anyone looking for something a little different to get lost in.

You may also like
Crazy Monkey StudiosHide and Seek