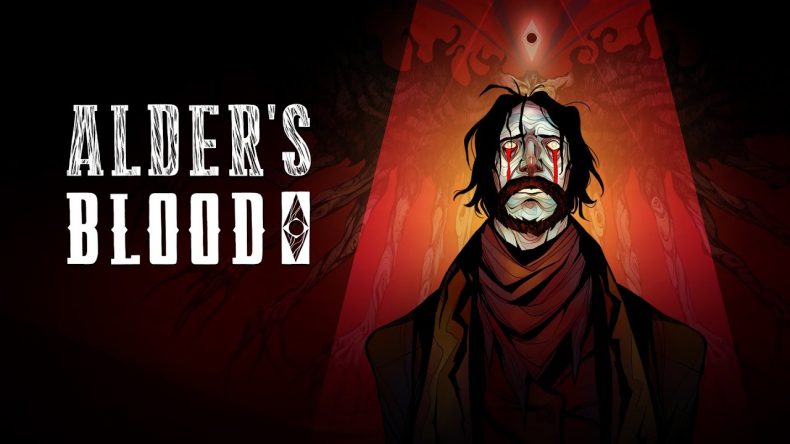 Eldritch horrors and beastly abominations have become quite popular in games lately, which is an odd thing to say. Games like Bloodborne were the catalyst, but there has also been a number of Cthulhu-inspired titles over the last couple of years too. It’s clear that Shockwork Games are fans of the ol’ beasties and unspeakable horrors, as Alder’s Blood is based entirely around these things.

God is dead. Turns out that humans killed Him. His corpse is somewhere out in the wilds, corruption pouring from it, spreading chaos and horror throughout the land. His death also brought about the creation of Hunters, a not-quite-human breed of monster hunters and banishers of evil.

Alder’s Blood puts you in the boots of Duke, at least for its tutorial, as he nears the end of his quest to find God’s body. It teaches you the basics of its turn-based gameplay, which is heavily focused on stealth. You need to use foliage to your advantage, keeping you hidden from sight, but not necessarily from smell. In the top left of the screen, a compass will tell you the direction of the wind, as well as a scent trail emanating from each character. This changes with each turn and if a monster catches a whiff of your presence, it will investigate and you better hope that you’ve moved far enough away to remain undiscovered. The tutorial acts as a playable intro, nicely showing off the mechanics of the turn-based gameplay while introducing players to its dark, unforgiving world. Duke’s reward for reaching the end of the tutorial mission is haunting, a vision of torment and horror, all told in an impressive display of 2D animation. There aren’t many animated scenes in Alder’s Blood, instead choosing to tell its story using text and almost comic panel-like images, but its story and world are full of intrigue and mystery. It’s relentlessly bleak, mind.

This bleakness is carried over into the gameplay, and not always for the better. Alder’s Blood is a tough, unforgiving game right from the very beginning. The turn-based missions are filled with harsh challenges, with no way of knowing which way the wind will go next. In a game so heavily stealth-based, it feels unfair when you’ve evaded an area’s monsters only for the wind to change and suddenly you’re spotted and forced into combat. There are even enemies that completely ignore the rules set out at the start, seeing you no matter which way they’re supposedly facing. On one mission I was ambushed by horrific, Cthulhu-looking beasts that would spot me anywhere, then proceeded to kill each of my Hunters in one hit. Running isn’t an option either, because if you’re spotted it cancels out your move and instantly gives the enemy an attack opportunity. It didn’t feel fair. Honestly, Alder’s Blood is such a relentlessly tough game that it borders on the ridiculous. There’s no real reason for it either, there are ways to paint the picture of a cruel world that don’t involve punishing the player at every turn. Even when you aren’t on missions, you have to manage your camp and crew of Hunters. Everything you do consumes food, which you need to scavenge or buy on your travels, but if you camp on the road you might be ambushed by monsters. It makes sense, of course, but it’s just one more layer of difficulty in an already over-the-top harsh game.

The problem with Hunters is that their exile blood makes them susceptible to Corruption. This means that they can be driven mad by the taint of the darkness spreading through the land, with their levels rising throughout your quest. There is no way to reduce the corruption, which leads to a Hunter snapping and instantly dying. You can sacrifice them before that happens, to bolster a lower-level Hunter, but that just means you’ll still have to replace them and money isn’t exactly in abundance to bring in fresh meat. There are simply too many systems to manage in Alder’s Blood. Keeping track of Hunter status, making sure your camp is adequately stocked and guarded, managing relations with the world’s various factions, crafting, and that’s before you even get into the actual missions. It’s a confusing and frustrating experience, even more so because there is a genuinely good game underneath it all. When you finally beat that mission without being seen, or you scrape through a tough battle, it conjures memories of XCOM: Enemy Unknown.

It’s also quite the looker. Its beautiful 2D artwork and impressive animation reminded me of both The Banner Saga and Thunder Lotus Games’ Sundered, especially the latter’s strange and eerie creature design. Character designs are a mix of Hugh Jackman’s Van Helsing movie, FromSoftware’s modern classic Bloodborne, and Deadwood. There’s certainly a frontier vibe, with the duster coats and long rifles, that just works in Shockwork Games’ world of monsters and corruption. There are plenty of great enemy designs too, from the lupines typical of the genre, to the more deadly eldritch monstrosities that do their very best to eviscerate your Hunters.

It’s such a shame, then, that Alder’s Blood isn’t as nice to play as it is to look at. On top of the difficulty issues and the overwhelming sense of everything being stacked against you from the very beginning, its save system is a bit broken. On numerous occasions, my mid-mission saves were nowhere to be found and I lost several hours’ worth of progress over the length of the review period, forced to load up an older save. There was even a time when an autosave crashed the game whenever I tried to load it up, again leading to lost progress and having to load up an older save. The actual save/load menus themselves would glitch out on a regular basis, not responding to directional input and even refusing to scroll below a certain point. None of this is acceptable at the best of times, but in a game as brutally hard as Alder’s Blood it’s even worse. Hopefully this can be fixed with an early update, at least.

I’m sure that fans of games like The Banner Saga and possibly Divinity: Original Sin will find something in Alder’s Blood, but I suspect most will only find frustration. While it does have its moments, a mixture of too many management mechanics and unnecessarily brutal difficulty makes this strategic, turn-based RPG an unhappy experience.

While it does show glimpses of its potential, the mixture of unnecessarily difficult gameplay and overwhelming management systems make Alder’s Blood a game solely for masochists.