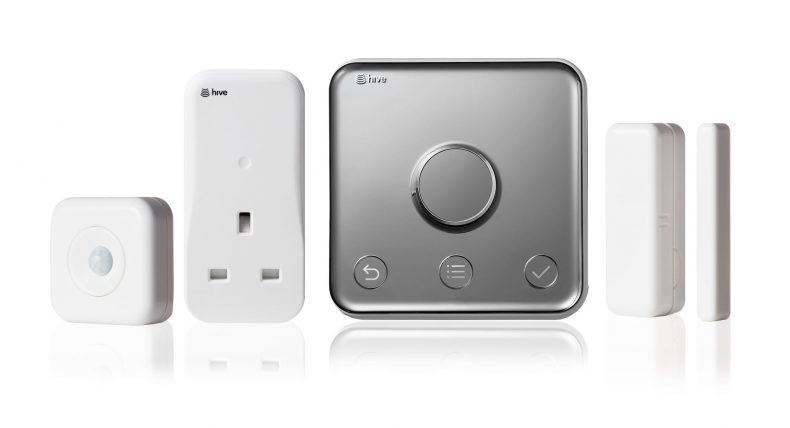 Up front, I want to tell you I adore the idea of what Hive is trying to achieve. For a few years now, in our home, we’ve enjoyed the Hive Thermostat. I want to be clear: we’re not rich, we waited to get a new boiler until the point an engineer told us “they do not make the parts for this any more, if it breaks, you have no chance of repair” before committing to a ten-year repayment plan on a whole new system, at which point we were offered the Hive setup, and given how much money you’re spending, and how long for, the extra few hundred seemed pittance.

But I do love my tech, and so my eyes lit up at the prospects. As an active gentleman, with active kids, I can now be stood in a field in the hammering rain watching my boys play football, and think “I’m home in 30 minutes, so I’ll quickly turn my heating on now, so it’s nice and toasty when we get home”. It’s as simple as that, too. An app that’s connected to the internet, and your tech at home is also connected to your WiFi. Fancy a mid-day bath when the heating is off? Flip the hot water on with a tap of a button on your app. It even has geolocation so you can set a distance from your home for it to ask if you’d like to turn the heating on: this is cool stuff. Moving onward, we finally upgraded to the Hive light bulbs. Now, even as a tech-fan, I was worried this was a step too far to becoming the laziest person on earth. Switching on a light without getting up to flip the switch? Christ alive. But actually, it works rather nicely. Outside light is the ideal spot, so you can flick the switch on before you arrive home. On top of that, everything connected to Hive can be turned on and off manually, but crucially, it can also be scheduled on a time slot. For example: have your wall lights come at 8pm every night and switch off at 11pm. This, then, is the future.

The motion sensor is the easiest of the two devices to set up. Unpack it, use the included sticky strips and pop it on the wall wherever you want to detect motion. Go into the app, via your smart device or the online web-UI, and you can have your phone, watch, inbox – whatever, really – pinged whenever motion is detected. The ideas that it’s sold upon is that if your kids are home from school, the motion will be detected as they walk into whichever room you’ve chosen (we tested ours in the porch and the kid’s room) and send a push notification, telling you such. In practice, this is a double edged sword. Those of you with anxiety will be out at work getting a notification of motion and be worried if it’s actually the kids, or you’re being burgled. I suspect that the motion sensor is far better when used with the new Hive Camera, which we’re hoping to test at a later date.

Hive sensors (both the types in this review focuses on) have something called “actions”. The idea is simple, really: “if this, then that”. What this means is that you can automate your home. For example, if motion is detected: switch on the outside light. If motion is detected: turn hive active plug on (active plugs are wall plugs that control other devices, like a radio, for example).

The problem, then, is that I couldn’t work out a solid use for these actions with the motion sensor. The best I could come up with was “if motion detected in porch between hours 8pm-11pm then switch wall light on”, so that when you come home from a day out, entering the house’s porch will switch your wall lights on in your lounge. It’s nice that this is automated, but it feels a little much, and while Hive scheduling is easy for the likes of myself (and probably you, as well) to programme, it’ll be far too complicated for those of an older generation.

The door sensor “actions” make more sense, because they work on a two-way basis. For example, open the door and a light comes on; but close it and the light goes off. This is a neat way of saving electricity, or making sure the kids have turned off their bedroom light. Have the door sensor connected to the Hive light bulbs in their room, and never realise they’ve left their lights on again. Likewise, the same works when used as a window sensor: ensure you’ve never left the house without shutting the windows again.

All this is great, of course, and makes sense if you’re building a smart home. It takes a lot of sitting down and sorting out, especially with multiple sensors, but the problem I encountered is that the two sensors (one is thick, one is thin) are a monumental pain to set up. We wanted to have them on our front door, which I genuinely think makes the most sense to position them, but due to how our PVC front door sites in the frame, this is impossible. The sensors need to be flush alongside one another, with no further than a 10mm gap between them. We settled for the porch door, but even this was a squeeze due to how close that door sits in the frame. Perhaps modern houses are less of an issue, all build to templates, and in fairness, built with this kind of technology in mind.

I’m hesitant to be too down on them, even though we couldn’t place them where we wanted, because they clearly do work. The window/door sensor is the better product so far, but purely because I cannot think of a brilliant use-case for the motion sensor. It’s great to know there’s movement in your home, but is it the cat, or a burglar, or the kids? It can’t tell you anything other than “there was motion here for this amount of time”. The door/window sensor is far better, though be sure it’ll fit your home before you buy. Being battery powered is useful, too, but obviously we couldn’t test the listed few years of battery life. It’s worth noting, I guess, that just at the point I was about to hit publish on this review, the door sensor has randomly stopped working. Nothing has moved, and I have no idea why – I wouldn’t think it’s the battery, but I don’t know why else it’d stop working like this.

This technology works, but it does rely on the other products that work with it. Any of these sensors are around £30, and they’re certainly a worth edition to your home if you already have other Hive products. That said, if you don’t have the bulbs or the smart plug, I can’t see any reason you’d want them aside being able to have the heating automatically turn off when you shut the front door, or perhaps when you open a window because it’s too hot. Perhaps with the entire collection of Hive products (I’d like to test the camera and smart plugs but the price is a little off-putting) these devices all sing together, and I am impressed by how it all works, but right now these sensors feel like a nice luxury, rather than an absolute essential.

Small form factor makes them fit into the home
Not overly pricey
Good use of "if this, then that"

Perhaps with the entire collection of Hive products these devices all sing together, and I am impressed by how it all works, but right now these sensors feel like the icing on a cake, rather than the filling.