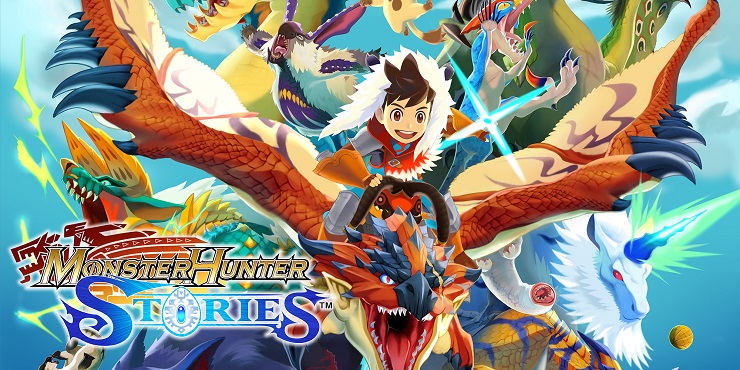 Monster Hunter is a series known for its challenges, one where you prepare your journey into the wild and spend plenty of time trying to track and eventually battle the monsters you are trying to hunt. It takes careful planning, and the final encounter is a real slog. It rewards dedication, but it can be a slow and arduous process. Monster Hunter Stories has gone with a very different approach, featuring a JRPG battle system and a story that’s much more engrossing than many of the games that have come before. It’s a colorful and somewhat simplistic game which is easy to get stuck into, and whilst monsters still play a big part, it’s much more straightforward and familiar, especially as there are a bunch of other famous pocket monsters that seem to have inspired this greatly.

The core concept of Monster Hunter Stories is to find ‘Monsties’ and bond with them via the use of a Kinship Stone. The village you live in gets attacked by a big monster infected with the Black Blight – a dark and mysterious evil that is slowly taking over the land, and as a Rider, you must do everything you can to stop it. Besides a few darker moments, the story is lighthearted and funny at times, with a range of characters you’ll learn to love, such as the rhyming chief of Hakum Village, and even Navirou, your Felyne buddy. I’m not going to lie, the cat puns become a bit too much especially when they’re fitting the word paw into any possible nook, such as “pawful” and “expawsted”, but hey, it’s a family friendly adventure and it’s all for shits and giggles, right? You’ll get to explore a great world in MHS, and it can take quite some time to get from A-to-B, but certain Monsties will let you ride on them, so journeys become faster – though it can be nice to walk and explore due to the cutesy and detailed design. Never fear, there is fast travel as well, so there are even more chances to cover great amounts of distance. The main fights take place in caves, but you can bump into a whole range of Monsties in the wild, and whilst they can be avoided easily, it’s worth taking part because they’ll help to level you up as well as your party.

The monster nests found in the caves are located deep within, and after reaching them, you’ll be able to rummage through the nests and find an egg. There’s a great risk and reward by trying to steal an egg, but sometimes an angry mum or dad will attack to protect their baby (rightly so!). These battles can provide quite a challenge, so this is when leveling up can give you the advantage. If you make it out of the cage alive (which you probably will as combat can be quite forgiving), you can take the egg back to the village and hatch it to provide one of the many monsters for you to take on the road with you.

Each monster has different stats, and by finding more you’ll mix and match your party to suit your type of style. It’s hard not to get attached to certain monsters, and there was one of my Monsties who I became rather attacked to. She was in almost every battle I ever had. Cersei the Arzuros is a multi-coloured bear capable of destroying other monsters with ease due to her power, and our joint ability was incredibly powerful, especially when it reached the third stage (sorry Jon and Rodney, but Cersei is my girl). It isn’t just your variety of monsters that can take down enemies as you’ll be able to upgrade your armour and weapons, as well as buying in new stuff from shops in the villages.

The meat of Monster Hunter Stories is the turn-based battles, and they’re rather detailed as well as being varied every time. They follow a rock-paper-scissors format where you both choose a style of attack: power, speed, and technical. One will trump the other, so learning your opponent’s quirks is important, and getting used to their attacks will be vital if you want to win. Bigger beasts tend to go for powerful attacks, so by using speed you’ll beat them every time. Likewise, power beats technical, and technical beats speed. The Kinship Stone mentioned earlier plays an important role in battles, as successful chains of attacks build the kinship between you and your Monstie, and over time your team will develop special abilities and brand-new skills. Your Kinship Stone’s power will build, and will get to three different levels, with three being the highest and most powerful. Once you reach one of these levels, hop on your beast and unleash hell.

Many battles can provide a challenge, and you may very well be overpowered and lose all your HP. You can use potions and herbs to fill your health gauge, but there’s a good chance your health will reach zero. Thankfully, you’re given three hearts, so losing life doesn’t automatically mean death. There’s a forgiving nature to MHS and it’s quite refreshing. It’s a game you’ll enjoy for its cuteness and its battle mechanics, being challenged yet never really reaching frustration, and it’s great to while away the hours enjoying the pretty world, meeting the quirky characters and fantastic beasts.

It may be different to the other games in the MH series, but Stories is a lot of fun, and the JRPG mechanics are enjoyable, providing lots of different scenarios in its combat.