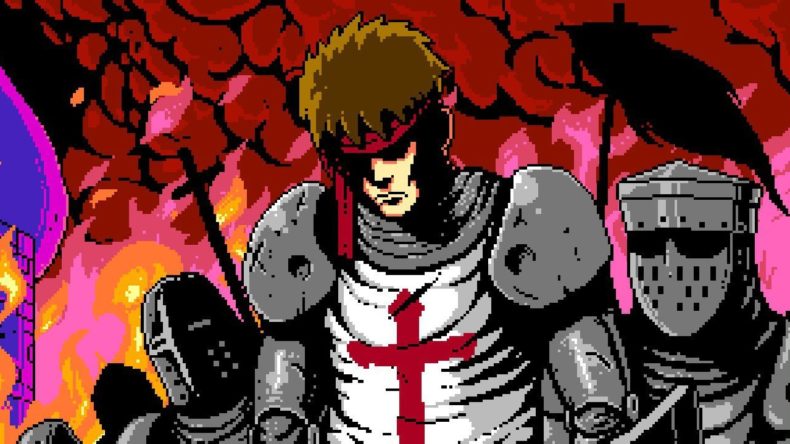 In recent years the humble Metroidvania has risen to become one of the genres most able to surprise and innovate. Each new take on the formula offers something new and interesting, even if not all the elements blow you away. Infernax introduces narrative choice alongside its exploration to deliver suspense and keep things fresh.

To illustrate, the choices you make in Infernax have genuine weight. Take, for example, my experience in the town of Arkos. As I made my way to the settlement, I came upon a group of bandits camped outside a wizard’s house. They kept inviting me to sit with them, but I was having none of it. As Duke and protector of this land, I wasn’t about to sit and drink with ruffians. Instead, I took the Wizard’s contract to shoo them off his property.

Off they went, shouting threats. And the Wizard, in gratitude, gave me a new healing spell to add to my repertoire. I carried on towards Arkos, and met the innkeeper – or brewmaster, as they’re called – on his way into town. These NPCs refill your health potions for no charge, and so are vital to your adventure. So imagine my dismay when one of the aforementioned ruffians stuck an axe in his skull. I fought them and killed them, but my actions and theirs had left me with only my heal spell (cast with very limited mana), and no way to refill my potions in this town. The brewmaster’s wife wasn’t happy, either. 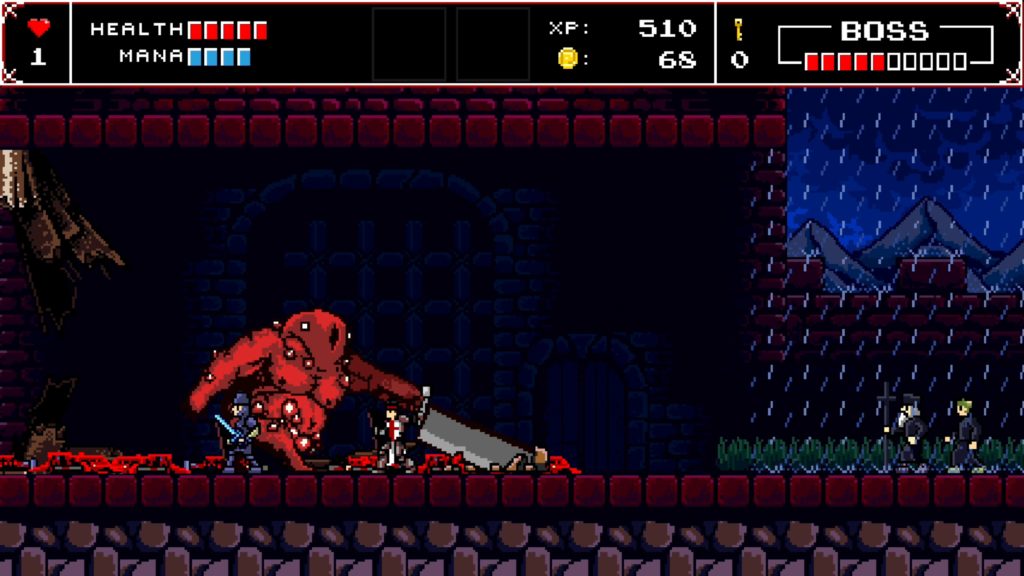 Interestingly, Infernax likes to punish you for making what you might consider to be the kinder choice – so you’re never quite sure what repercussions your actions will have. It’s refreshing and exciting to see this kind of thing implemented in a side-scrolling pixel-art Metroidvania.

As Duke Insert_Player_Name, Infernax sees you return from a holy Crusade to find your beloved dukedom overrun by evil. Demons and monsters ravage the land, spreading fear and disease wherever they go. Armed with a trusty mace and shield, you head out to slay five monstrous lords and free your people.

Folk you meet will give you side quests for various rewards. Sometimes you’ll revisit areas to find people rebuilding and repairing structures now you’ve cleared out the evil. It’s a nice touch and makes it feel like you’re making a difference. 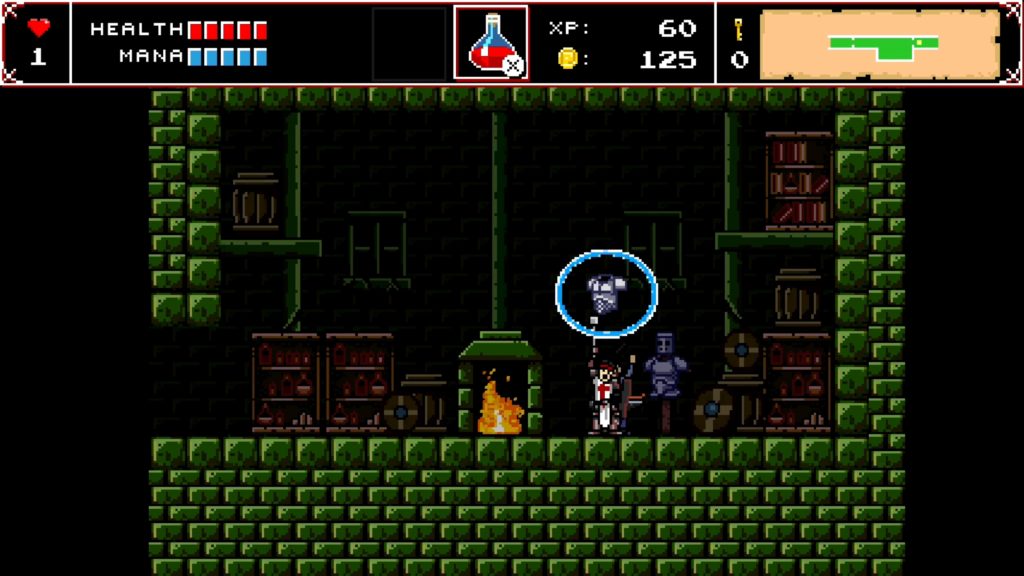 There’s an element of character progression as you improve your armour and gear, and increase Strength, Health and Mana at special shrines. Resting respawns enemies and allows you to level up, almost like a Soulslike. In fact, you can opt to play it on a difficulty that makes it very Soulslike indeed, forcing you to respawn and recover your lost XP and gold. Or you can play it on “Casual” difficulty, which gives you extra lives and checkpoints you at shrines.

Combat is a little basic, as the Duke can only jump, attack and duck. Standing still will cause him to block basic attacks and projectiles, although you’ll slowly unlock new abilities. You’ll be able to jump higher and break through certain walls to find new areas. You can even hit solid projectiles back at enemies, which is incredibly useful.

Exploring the overworld will open up new areas or allow you to mark them for later if you don’t have a certain skill needed to proceed. But scattered around are Keeps, in which you’ll find new abilities and face bosses to advance the story. Keeps are filled with traps, from spike pits to spear-throwers, and will take patience and perseverance to overcome. 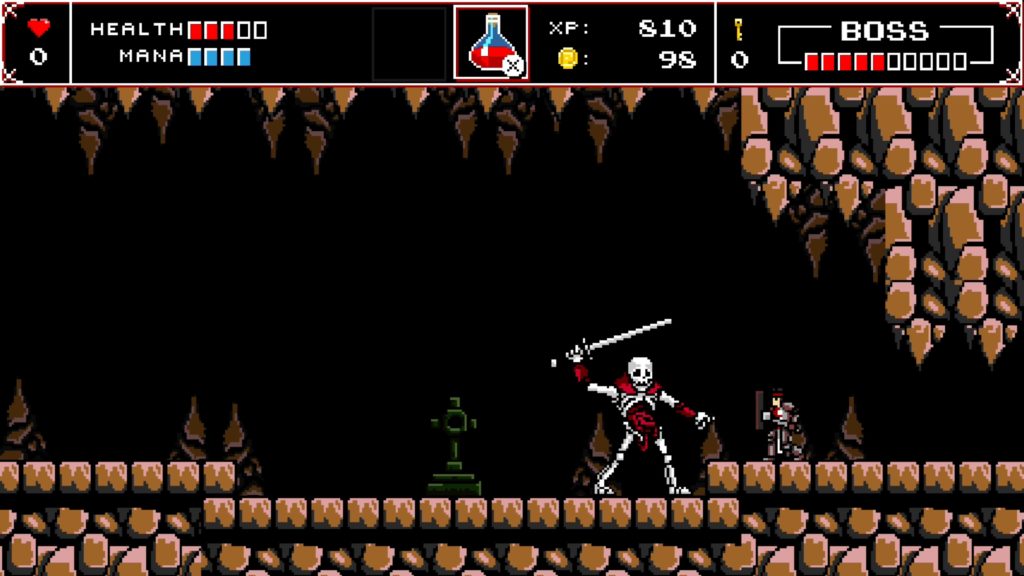 Due to the simple nature of the combat, boss fights are usually either too easy or frustratingly hard, with little middle ground. Most involve getting close enough to land a few hits, then backing off and avoiding attacks or dealing with adds. As you progress, bosses become more complex, some summoning minions or using ranged attacks or the environment.

Infernax never feels punishing, even when you’re having trouble with a certain area, but instead rewards your perseverance. Sometimes, the best option is to go grind some XP and come back stronger. That said, the platforming can be a little fiddly and Infernax doesn’t always like to tell you where to go next, which can lead to frustration.

The pixel art is great, invoking classic Konami titles of yore but mixing in a healthy dose of gore and body horror for good measure. Old-school chiptunes complete the atmosphere, and overall it just feels bloody good to play. It’s not a huge game, and there are times when the combat is a little straightforward for its own good, but Infernax is still a solid adventure game.

Infernax is a great mix of pixel-art nostalgia and modern narrative design that never fails to entertain.