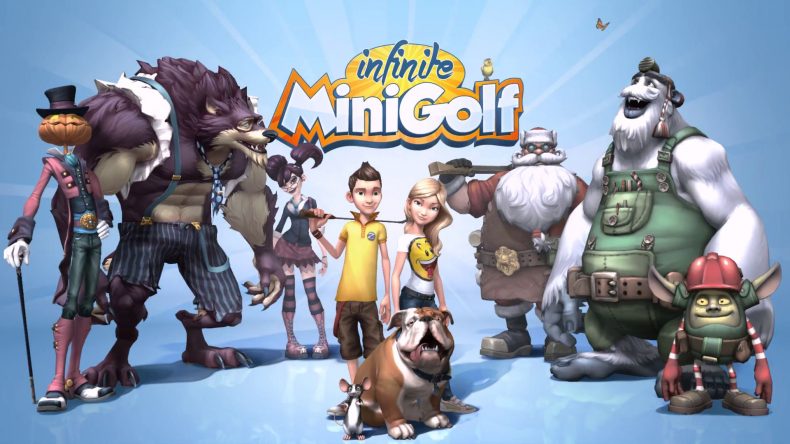 How do you review a game where the content contained within is entirely created by its community? This was a question I had to ask myself after I had spent a fruitless fifteen minutes on the first hole I attempted in Infinite Minigolf, to putt the ball without knowing where the damn hole was.

You see, there was no dialogue box or anything that offered instruction, just on-screen icons telling me how to move my aim and power my shot, after a little bit more playing I managed to adjust the camera and lo! there was the hole, floating a good few metres away up in the air. After finally putting out and moving onto the next hole I realised these weren’t pre-made courses, they were made by individuals in the game, and that’s when my synapses started to fire. I probably should have guessed really when I went through to solo play and the very first option was to use the course creator, a bit odd for a game that you want to ‘play’. After that you get course browser, and third up is Quick Play, ironic, considering the name. The entire front end UI is a load of giant icons with little to no words, leaving you to work out what most of them do. One allows you to invite friends to your group for a spot of sport and the other allows you to customise your avatar, your guess which is which. On the right hand side is the actual menu with the game modes, these are, at least, worded adequately. The whole thing is blue with your rather plain looking avatar right in the middle, which you can’t even customise until you’ve earned cards to purchases new items with, and you get those by, you guessed it, playing Golf.

Your avatar as well doesn’t look great, kind of like one of the human models from ITV’s Catchphrase (the new Stephen Mulhern one, look it up, I’m not your mum), and this is driven home when you manage to sink a putt and the camera zooms right in so you can watch him do a bad version of John Travolta’s Night Fever dance to twee synthesised plink plonk of a tune, while they whoop and holler in a rather bored fashion. It’s bad the first time, after the eighth or ninth time you may be wondering if earning those extra cards for avatar items is really even worth it. Anyway, at least the course editor is good, once you figure out how it all works. It’s all guided by symbols and icons with nothing ever truly explained to you. It’s all there, you just have to find it yourself. I was quite pleased with myself when I finally figured out how to raise and lower sections, and again when I figured out how to rotate, it took me five minutes to work out how to delete a power-up I had placed, so to say it requires getting used to is an understatement. There is at least a good selection of obstacles and additions you can make to your course once you’ve got your layout down, seriously, if you’re willing to put the time in you can make some really good stuff, and I managed to play a few cracking courses, the question is, do you have the patience to teach yourself?

While jumping in and playing minigolf until you’re sick to the back teeth of gimmicks may sound like fun the random course list created by community curation doesn’t make for a great deal of fun. There’s such a drastic disparity in quality that you can find yourself doing a multi-layered assault course one second and then a straight two yard putt for the next 3. There’s certainly scope for some ingenious designs thanks to an editor that once you figure it out is really easy to use, but there’s nothing from the developers themselves to try and ignite inspiration within the playerbase. Infinity may mean that there’s potentially a lot of content, but there’s really no guarantee you’ll get anything good.

Excellent set of tools for creation

Initially confusing
Looks Incredibly dated
Never explains anything to you

Infinite Minigolf sets out to do what it aims to do by giving you the tools to make the minigolf courses of your dreams, but while it’s good to make, it just isn’t fun to play.