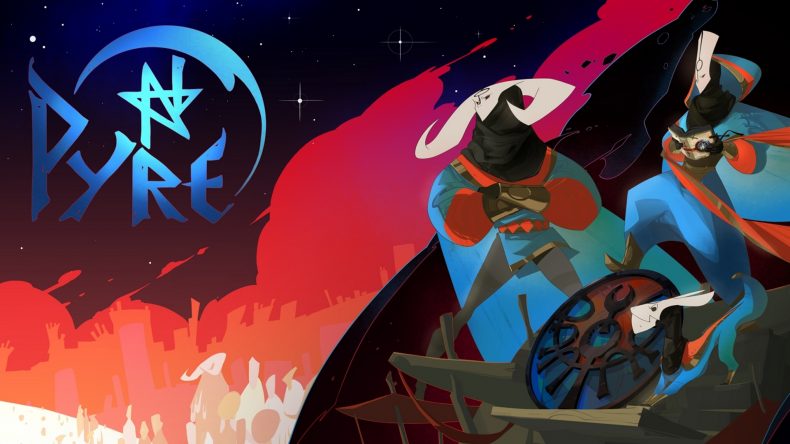 If you’ve ever played Bastion or Transistor by Supergiant Games, you’ll know just how fantastic the calibre of adventure can be, and how utterly breathtaking both the visuals and music are. You’ll also know how different the concepts of both games are, but how they both manage to exceed expectations without falling victim to their own ambition. Pyre is game number three for the team, and in short, they have once again created something special. It’s quite a gift, and Supergiant Games’ talent is present in every single second of it. I wouldn’t say it’s niche, but Pyre knows what it is, and won’t appeal to everyone. It’s a combination of many different styles and ideas, but they all work really well together, and if you aren’t hooked within the first thirty minutes, that probably isn’t going to change.

The story sees you and a group of diverse characters traverse the strange land of Downside, fighting for your freedom in a number of ceremonies called Rites. You’ve all been exiled from the Commonwealth (for reasons you aren’t too sure of at first), but you, the player, are different – you are the Reader. Your fellow exiles treat you as a leader, wise and knowledgeable, and as you progress through the story, you’ll have to make many decisions that will bring you closer to freedom. This can include picking the names of characters you find on your travels, what to do in your downtime, and what path to take. Vocations have you either training yourself or your friends to gain XP, or scouring the land for Talismans to equip that’ll give you the edge in the Rites. As for what direction you choose at certain points on the map, different routes will give you bonuses depending on which friend has given you the knowledge, but choosing one over another can upset the friend you chose to ignore. Pyre has some fantastic character development, both in the RPG progression system, and the game’s narrative. The further you go, the more you grow closer to your friends. For example, Jodariel was a surly, untrusting warrior at first, but she isn’t always as cold to you. There’re poignant discussions and events occurring, but there’s a nice sense of humour about Pyre, never taking itself too seriously. On your journey, you’ll spend a lot of time listening to people whilst in your Blackwagon, and the virtual novel style works well to portray these conversations, clearly taking inspiration from the Japanese games it’ll remind you of.

The Rites themselves are probably Pyre’s biggest pull. You play these Rites in a team of three (unless certain story points change the flow of the game – something that does tend to happen), trying to protect your Pyre from the opposition. You must throw a Celestial Orb (essentially the game ball) into their Pyre, or run right into it if the gap is there. Each of your team has four stats: Hope, Quickness, Presence, and Glory. As you win these Rites, certain perks will help improve your attributes, and with each character having two small but important skill trees, it pays to win and to pay attention to these. It’s a great idea by Supergiant Games; I had no idea I’d be playing something that has a sport of sorts, and these Rites require quick-thinking and strategy to win. You’ll meet tons of people along your way and many will be willing to take part in the Rites for you. Pamitha can fly, so using her tends to be a no-brainer, and Sir Gilman is a superfast worm who compliments the stronger, more brutish characters. When not in possession of the orb, your team will form a barrier to protect the Pyre, but as soon as you hold it, the barrier disappears. If you get touched or struck by the opposition, you’ll get banished temporarily (a time that can be reduced if your Hope stat is high). You can shoot your opposition with an aura that will banish them, and its size depends on your Presence stat. The Glory stat determines just how much you’ll damage the opposition Pyre. Jumping into it from a distance is the most satisfying, especially if you’re leaping over a couple of the opposing players.

Through battlefield variables or story developments, these Rites give you knew goals, and this helps to keep later game matches feeling fresh, and the mechanics used are also put into practice through various missions, such as when Shae has to fight off weird creatures from your Pyre, or when Sir Gilman has to do the same in the Sea of Solis. They’re mini games that mean Pyre is more than walls of text and the Rites, but they feel more like filler than actual content to make the game more interesting.

The hand-painted style is mindblowing, and the music that goes with it is stunning. I’ve not seen anything this gorgeous since, well, probably Transistor! The environments created within the Downside are varied and full of life, even when traversing through deadly and desolate areas. The soundtrack has a great range to it, and the travelling music sounds as if it was composed by Pearl Jam (which I absolutely love). Overall, the diversity in instrumentation and tone expands the appeal of Pyre tenfold, and it’s the type of soundtrack I could listen to when I’m not playing it.

Pyre is a menagerie of styles and ideas, with a tightknit story and some fantastic character development. Games as art is always an interesting topic of conversation, and I hope when you have this chat, Pyre will be first on your list. If you’re a fan of the Rites, these can also be accessed through the multiplayer mode, but without the story playing parralell to them, they don’t feel as important. Experiencing the struggle with the group of Exiles you bond with make the Rites mean something, and striving to win becomes a top priority. Give it a go and stick with it – the commitment will be worth it.

Not only is it one of the most beautiful games I've played in recent memory, but it has some new mechanics and ideas to keep you playing.