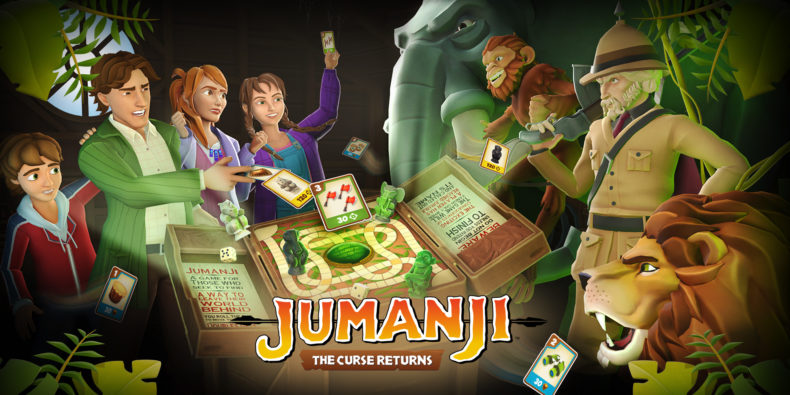 Whether you like playing Monopoly, Snakes and Ladders or Betrayal at House on the Hill, we can all agree on the coolest board game of all time. Jumanji. The 1995 movie captured the hearts of a generation, with its thrilling story, rampaging animals and an incredible performance by Robin Williams. The franchise is a perfect fit for video games, so let’s see what Jumanji: The Curse Returns is all about shall we?

Jumanji: The Curse Returns is a four player game, where the aim is to reach the centre of the board and say (you guessed it) Jumanji. Each turn a player rolls the dice, and after you’ve moved your piece the game summons up some angry animals for you to fight. You’d expect this to lead to a mini game or something, but not here. 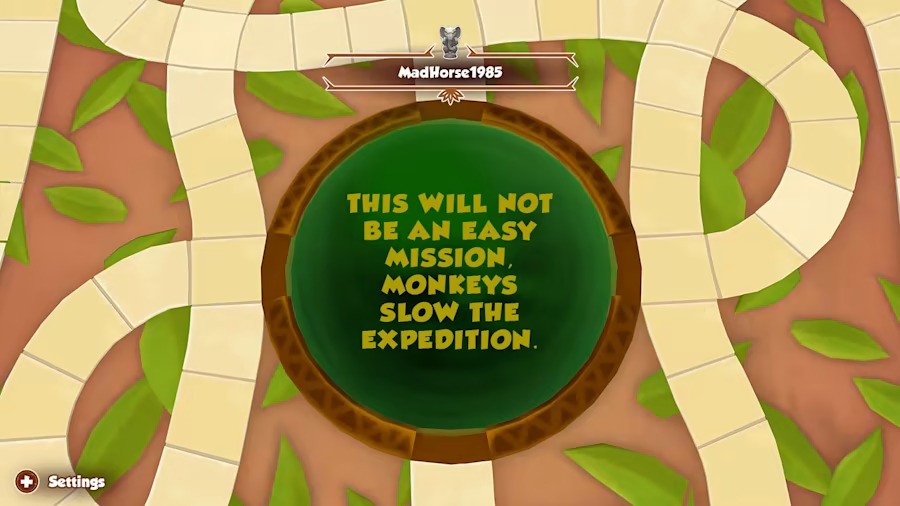 Battling in The Curse Returns is actually card based, and is anything but slow paced. Playing a card requires action points which constantly refill, then you and your pals can sling them wherever you want. Weapon cards deal damage, drums calm down animals and delay their attacks, and magic pots pump up your (or your allies) magic meter. If you’re not quick you’ll gain points faster than you can spend them, so try not to spend too much time thinking and go all out.

There are decisions that need to be made despite the rush though. Different animals are weak to different weapon types, and you’ll deal double damage and gain a magic boost if you exploit this. Mosquitos are vulnerable to tennis racquets whereas living plants are handily disposed of with an axe. If you’re struggling with remembering  though, there’s always magic and team attacks to take advantage of.

By slurping enough magic pots or hitting enough weak spots you’ll build up your magic, and when the meter is full a fourth card to use the power of your board game piece will be added to your hand. This always deals a big chunk of damage, and is great against tougher foes. Even better than this is the team attack, which can only be done using the power of team work. By giving your buds your magic pots or other buffs you’ll gain some teamwork points, and once you collectively have 100 of these you can unleash this powerful ability.  It deals massive damage to all enemies, so helping each other is almost always better than dealing attack after attack. 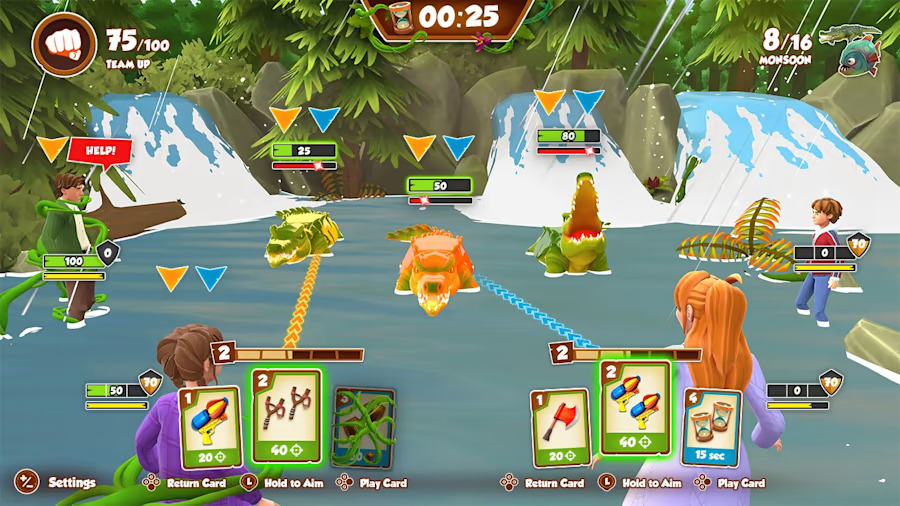 Once you beat a fight, you’ll be given some money to spend on new cards. You’re offered three of these after each scrap, and they’ll usually be a big improvement on what’s in your deck currently. It’s well worth investing in the stronger versions of weapon cards, or if you’re lucky the incredibly overpowered magic pot that gives the entire party magic points. If you deal the most damage or help the most people in the last battle you’ll be given some bonus cash, so there’s some incentive to get the best cards and perform well in every fight.

Sometimes the wrong enemy will show up at the wrong time and you’ll end up losing a battle. This doesn’t mean the game is over, but does mean that a location (from the film of course) is lost to the vines of Jumanji and cannot be used any more. If all five locations are taken over then there’s nowhere for your characters to play the board game, and you’ll game over.

Since the goal of Jumanji: The Curse Returns is to reach the center of the board, you’ll be rolling a lot of dice and hoping for a good result. Obviously the higher you roll the sooner you’ll win the game, but sometimes you’ll get lucky with a double and roll again or trigger a random lucky event meaning you avoid a fight. Getting a jewel to upgrade your playing piece is the absolute best result you can get. These come in many forms, but always make battles easier. Whether it’s more powerful magic, a boost to your team points or a shield at the start of a fight, there’s nothing better than being offered a jewel instead of getting in another scrap. 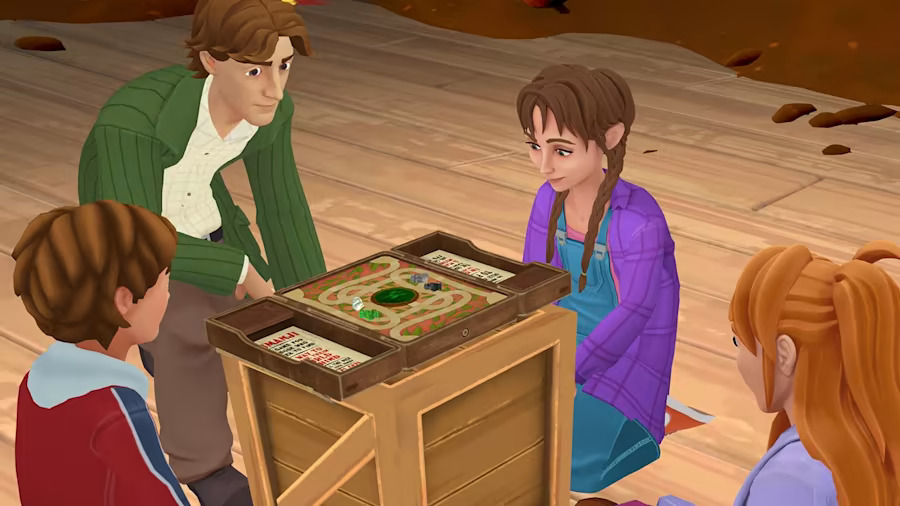 Jumanji is fun enough alone, but it really comes to life with friends. There’s local and online co-op available, with even the ability to play with randoms if you want. If you work together there’s even some good opportunities to build decks that compliment each other, and really deal with those pesky critters.

There’s one big issue with Jumanji: The Curse Returns, and that’s the lack of content in the game. Every game you play is essentially the same. Sure you’ll get offered a few different cards and can play on a snowy mountain resort instead of the level based on the film, but ultimately you’ll be doing the same thing over and over again. There’s no progression either, which means there’s no real drive to play a lot of the game. It’s a real shame, because the concept is great.

Jumanji: The Curse Returns is a really interesting multiplayer card game that just lacks the content to keep you coming back. Using the right cards and working as a team to beat back the animals and reach Jumanji is a lot of fun, but after two or three rounds you’ll have seen everything it has to offer.

Jumanji: The Curse Returns is a fun multiplayer card game, but there just isn’t enough reason to play it for very long.