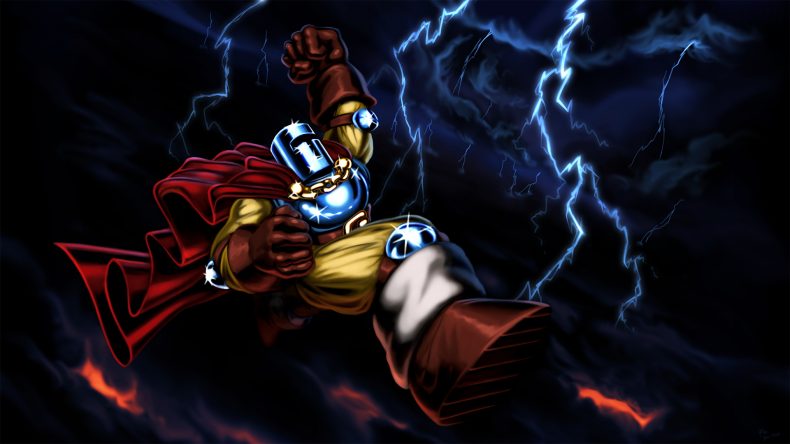 In 2017, the world was first introduced to Getting Over It with Bennett Foddy. The bizarre upwards climb of a man in a cauldron amused and frustrated millions, with its unique take on difficulty and losing progress. With no checkpoints and gravity more than happy to pluck you from the sky, you could spend hours reaching a new area only to fall back to the start of the game. Foddy stated the game was made for “a certain kind of person, to hurt them”, and Jump King is here to follow in his punishing footsteps.

The first thing you learn from Jump King is that the aim of the game is to reach the top, and that there is a “smoking hot babe” waiting for you there. To the unnamed knight you play as, this is apparently all the incentive he needs to embark on this so noble quest. The babe is waiting, so it’s time to dust off your jumping boots and leap into the action.

As you may expect from a game with jump in the title, your method of propulsion is very much leg based. You hold down X to charge your jump, and release it to spring upwards. The longer you hold the button, the further you’ll travel, and you have no control of your leaping knight once he leaves the ground. If you underestimate your jump, chances are a long fall will be waiting for you. Jump King is made up of one long vertical stage, and much like Getting Over It, there are no checkpoints to help you get back to where you slipped up. You might perfectly hit 10 jumps to progress up a few screens, but one mistake and you’ll be face down in the dirt, possibly lower than where you started. Because of how punished you’ll be from just one misstep, the game outright requires you to master every jump to ensure you can make it to the top.

There’s almost a puzzle element to figuring out what power and direction you need to jump in. Some platforms require you to bump off the walls to land in the perfect spot, whereas others area have wind to take into account, or even ice to send you careering off an edge and downwards again. These varied environments offer even more jump mechanics to learn, and more opportunity for failure. So far, so good, right? Well, yes, but the crushing loss of progress you’ll have to endure over and over again is horrendous. The level of patience required to even think about arriving at the babe at the summit is not to be taken lightly. As a concept though, it’s hard to deny the unusual take on difficulty isn’t oddly compelling. Despite the overwhelming odds of failure, the simplicity of the game means victory still feels attainable.

That doesn’t mean there won’t be hard times though, with a lot of grieving for lost runs. When your knight is lying flat on his face in the dirt, back at the start of the game, you will feel like giving up. At the more regular fall points, there are characters waiting to deliver a line of often chastising dialogue. The bottom of the game is home to an old hermit, who isn’t shy of laughing at you every time you arrive back in his domain.

The experience of fighting your way to the top of the tower is made all the more cerebral by the lack of music throughout. There is simply nothing to distract you from the pure jumping-ness of Jump King. It’s unusual choice to forego all background noise, and I initially thought it was an issue with the console port. Sitting alone with only the repetitive jump sound effect as company is a challenge in itself. If you are somehow able to overcome the odds and meet with your hot babe, there are multiple extra game modes that offer an unimaginably more difficult challenge. New Babe+ mode offers an entirely redesigned and harder version of the original map, whereas Ghost of the Babe takes you to an entirely new location. I can’t pretend I made much progress in either of these evil concoctions, but for those seeking more challenge there’s plenty available here.

In many ways it’s hard to recommend Jump King. It’s an incredibly frustrating game but that’s by design, and only the most level headed will be able to appreciate the enjoyment of platforming mastery. The lack of background music and the mocking words as you fall over and over again make for quite the oppressive experience, but for those with the dedication to make it to the top – the satisfaction of victory and the smokin’ hot babe await.

Extremely frustrating
Lack of background music detracts from the experience

Although frustrating and oppressive by design, Jump King brings a level of satisfaction in victory rarely found in gaming. The varied level design and sheer amount of content within will provide hours of falling for those with the patience to continue.