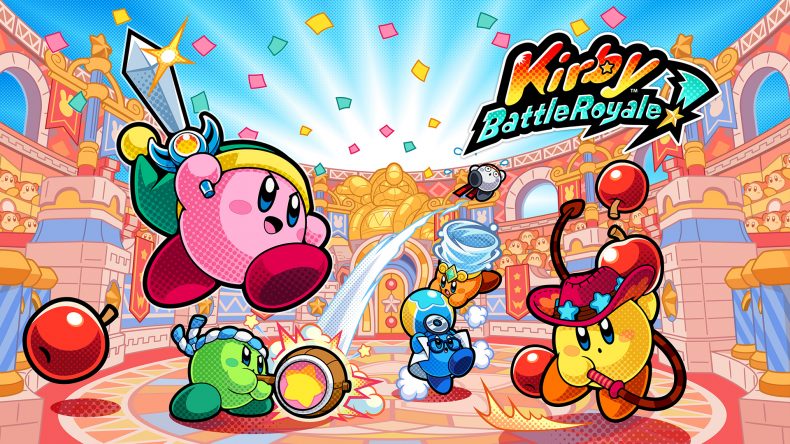 Can you imagine how you’d feel if you made your way to a local competition to win an amazing prize only to find out the organiser had made several clones of you for you to fight against? Personally I’d feel horrified and violated, Kirby though stands nonplussed, thoroughly unworried that there are copies of him running around and getting into fights. He’s a cheery fellow, but even for him this is an odd reaction.

The little pink guy is twenty-five years old this year and in his time he’s become known for his spin off games as much as the mainline titles, possibly even more so than Nintendo’s own moustachioed plumber. From pinball, to golf, and even breakout, here he’s competing in battles to be top dog and win a giant cake. Food’s always been a huge motivator in Kirby’s actions, here it goes so far as to make him ignore violations of his basic rights.

Anyway, King Dedede has lured the pink vacuum in with a giant dessert and is trying to put Kirby in his place with his multicoloured Kirby clones. The aim is to fight through several different types of battles each with an arbitrary point allocation that fills up a bar and unlocks a qualifying battle, success in which unlocks access to the next battle tier and several new battle types. As far as a story mode goes, that’s it. There’s one vs four battles where you’ll go solo, or two vs two battles where you’ll pair up with Waddle Dee, but generally the rules remain the same. Outside of the arena battle the remaining modes generally see you aiming to collect more items than your opponents, answer questions, or doling more damage out to a boss. Nothing in the story mode is much of a challenge, and it’ll be a breeze to pretty much anyone, if anything the only challenge is persevering right to the end of it. The differing game modes offer some variety, but not one of them is as good as the game’s default arena battle mode. As you move up through the ranks each tier’s progress bar requires more points to fill it, which is obvious, but the points dished out from the events don’t raise in kind, so you’ll repeat events regularly and that grows tiresome.

Progression through the story unlocks achievements which in turn grant coins which can be used to purchase items from the ‘Collection’ amounting to abilities, characters, battle events, music and more, these can be used either in the local battle mode or online. It’s against other humans where the game becomes so much better, but only locally. Playing against other humans online generally feels like playing harder AI due to the fact there’s no chat function, when you win it’s so much more satisfying to be in the same place as your opponent, it also didn’t help that the servers were dead and I only managed to get two games out of it.

Thankfully playing each other is made easy thanks to Download play, meaning that 3DS owning friends can join you in a burst of play even if they don’t own the game, you won’t get the full suite of modes but it’s still a very generous thing to have. Download play has always been a boon for 3DS local play and this is no different, the problem is getting several DSes all together in the same place.

The problem with Kirby Battle Royale is that what is here is kind of short lived, it’s not burgeoning with content and yet Nintendo are pricing it as a full fledged product rather than a small offshoot like Blowout Blast was. There’s fun to be had with the ‘Cake Royale’, but it’s all too repetitive and short lived.

Download play in Kirby Battle Royale will give a group a burst of fun, but after that it’s unlikely you’ll return for more.