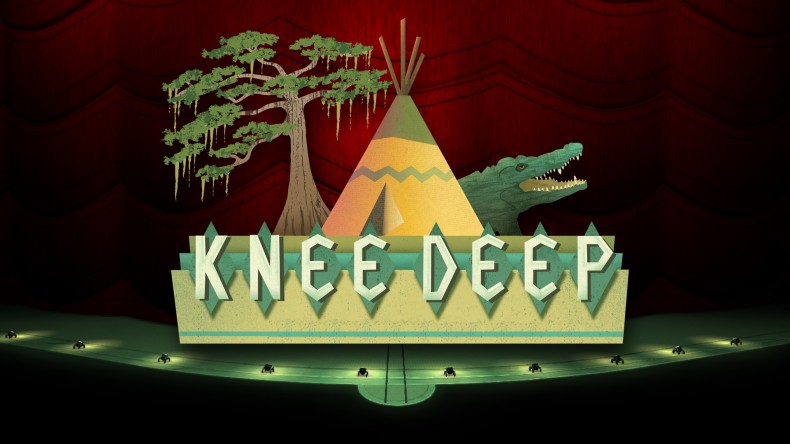 Knee Deep is an episodic, narrative driven adventure game set in a small town in Florida surrounded by swamp called Cypress Knee. There is a strong noir theme to it, with the main plot revolving around a washed up actor who has seemingly hanged himself amid scandals involving a religious cult and a new commercial development in town. What makes Knee Deep slightly more unique is that it presents itself as a play, complete with rotating sets and moments where characters speak monologues.

You play the role of three different characters: Romana Teague, a gossip blogger; Jack Bellet, the jaded reporter for the local newspaper; and K.C. Gaddis, a private detective hired by the studio to find out why the actor killed himself. The game is split into three acts, all of which are available straight away, unlike the episodic release when it was originally pushed out onto PC. As with most narrative-based games these days, player choices figure heavily in the way the game plays. However, unlike most games, the illusion of being able to dictate the outcomes of the mystery are made clear from the start. You cannot change the story in any meaningful or significant way, your decisions will merely affect the way the other characters you encounter, both those you play as and those you don’t, will interact with you. For example, as Roman Teague, you are a bolshie blogger prone to writing inflammatory pieces. When she is first introduced to us, we are told that she is in danger of losing her job due to a piece she published that got her in trouble with her editor. It’s up to you, as the player, to decide what that was, and by doing so you can shape elements of Romana’s personality going forward.

The other two characters function in much the same way. In the first act, you take turns playing as each character, all of whom are investigating the apparent suicide of the actor. The action consists of walking around and talking to the various characters to glean vital clues as to why he chose to hang himself in such a seedy location. After you have gathered enough clues you are prompted to file a report: in Romana’s case, a blog post; for Bellet a piece for the local newspaper; then Gaddis, a report to his employers on what he has uncovered. You are given the option to choose what tone you file that report: safe, moderate or inflammatory. By choosing a particular tone, you are playing a game of balance between appeasing your publisher and negatively impacting your ability to obtain information from characters who have been affected by your story at a later point in the game’s narrative. It’s an interesting idea, but one that is only really explored in the first act. Acts two and three seem to reject this core conceit and focus more on playing out the story at which point any choices you make seem moot, which is shame because I was enjoying the subtle changes in the way characters reacted to me after publishing each report.

There is an eclectic blend of characters that you meet and with which you interact and gather clues from. For the most part they are amusingly written, managing to capture the eccentricity of small town America with great effect. One such character is the town mayor, who has a hilarious habit of using the wrong words in his speeches and when corrected, still doesn’t understand the correct meaning of the words. Similarly there is a mad old fella who lives in the swamp and is obsessed with tracking down a pure white gator that ate his wife’s arm and infant son years ago. There are other characters that are equally as memorable which all serve to create the impression of a town brimming with life. Unfortunately, the story trails off significantly into surreal territory; despite the Twin Peaks vibe of the beginning hints at, doesn’t quite hit the mark when the final reveal is made. That is in part to the dramatic shift in quality from the first act to the final third instalment. Act one is significantly better paced and written than certainly the final act, which feels rushed and relinquishes the façade of choice in favour of progressing the story. Whereas act one allows you to indulge and shape the personalities of your three protagonists (to a certain extent), the second and third act throw this all away. There are plenty of prompts to indicate that the dialogue choice you have made “reflects a previous choice”, but they are so numerous that after a while I wasn’t entirely sure what my previous choice was, and more to the point how I could change it in subsequent playthroughs. The plot lines of the three characters also merge into one in the final act, which further cements that lack of choice in the direction the game is flowing, a shame considering the effort to create the three distinct personalities earlier in the game.

Ultimately, the overarching mystery that has befallen Cypress Knee with the death of the movie star is quite good fun. It does descend into the ridiculous towards the end, and it is a shame that much of the promise from the first act isn’t carried throughout the game’s entirety. I liked the idea that what I was playing was a theatre piece, but I believe that would have worked better when the game was originally delivered in an episodic format. Playing in one sitting and having the game return to main menu after the Act has finished disrupts the play a little too jarringly to be entirely successful. An interesting game then, with some fun mechanics and ideas, it is just a shame the quality shown at the beginning wasn’t consist throughout its entirety.

Knee Deep has some interesting and fun mechanics and delivers a reasonable mystery. It is just a shame that the quality shown at the beginning doesn’t last until the end.