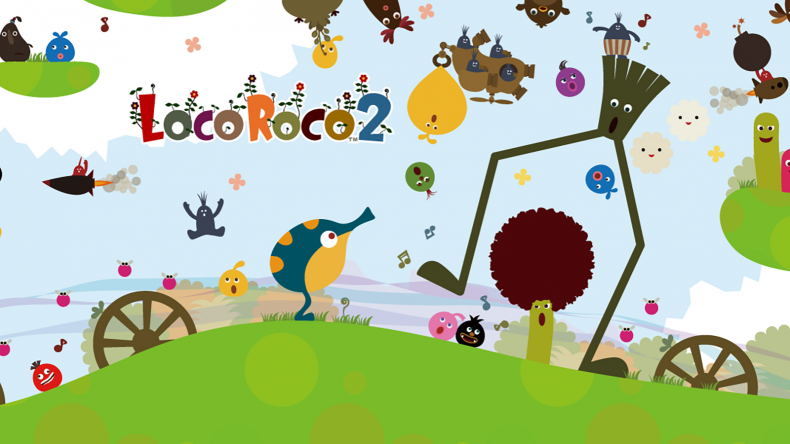 I loved LocoRoco, back on the PSP. Its mix of simple, two-button gameplay and adorable design made for such a lovely, happy experience. You couldn’t help but smile when you were playing it, even on the tougher levels that were dotted around the game. LocoRoco 2 Remastered is no different, in that regard.

I didn’t really get to play much of the sequel back on PSP, but it works just as well as the first game, adding a few extras like new new characters and one or two gameplay additions. Considering the PSP’s resolution was only 480×270, bringing it to PS4 at 1080p (and it even has 4K support) must have been quite the big job. It looks great though, with no visible drop in visual quality during gameplay; you could be forgiven for thinking that this was never a PSP game, it’s that sharp. The cutscenes don’t quite fare as well, looking horribly compressed, but luckily they lose none of their charm. It’s not like LocoRoco 2 had a sprawling narrative or anything. After being defeated in the first game, the sinister Moja have devised a song that causes living things to wither, sucking all the colour and life from plants and wildlife alike. They’re attacking the LocoRoco planet once again and it’s up to you to drive back the darkness and restore life to the affected areas. It’s a simple plot for a simple game, providing all you need to set you off on your quest.

That quest has you rolling and jumping around each level, rounding up your fellow LocoRoco and ridding the planet of the Moja threat. There are only two buttons, L1 and R1, used to tilt the world view and tip the character into rolling; press both buttons together and you’ll initiate a jump, dependent on the inertia you’ve built up through tilting. The fun comes from eating the fruit that grows around each level, which increases your size each time; holding Circle will split you into several LocoRoco, depending on how many fruits you’ve munched. This allows you to fit through small gaps to progress, or sometimes to discover the many secrets dotted around every stage. Holding Circle again will have all your LocoRoco shouting adorably, as they merge back into one big, round blob of cute.

The more LocoRoco fruit you collect, the more likely you’ll be able to take part in the musical portions of LocoRoco 2 Remastered. These require a set number of your little friends to take part in waking up a MuiMui (another little native of this planet) or to rouse the wildlife into life, through song. You can’t help but grin as the rhythm minigame begins, as your ragtag bunch sings along to your beats. The third part of the game has you building and expanding a house for the MuiMui you find throughout the game. Finding secrets and accomplishing certain tasks will earn special items that are used as the components for adding items and new rooms to the treehouse. It’s not an essential part of the game, but it’s just another layer of depth in a game that could easily be seen as a simple, quirky platformer.

LocoRoco 2 Remastered is a fun little platformer at heart, sure, but beyond that it’s a game filled with varied content that always, always makes you smile. Traversing each level can be as quick or methodical as you like, depending on whether you want to find the secrets or just enjoy the ride. It felt great to go back to a game that is almost a decade old at this point, and discovered that it really hasn’t aged at all. It’s as fun and heartwarming as it ever was, and will bring a smile to the faces of anyone playing. Perfect for this time of year.

A great port of a nine year old PSP game, LocoRoco 2 Remastered is as fun as it has ever been. Colourful and downright adorable, it’s a game that everyone can (and should) play.