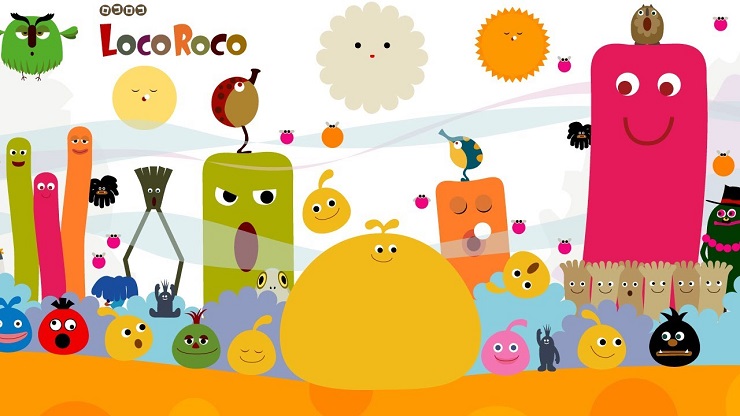 LocoRoco Remastered couldn’t have come at a better time for me, and for that matter, the human race (I’m not even exaggerating here). If everybody spent some of their day playing this bright and flamboyant little gem, then the world would be a better place – Trump, Putin, Jong-Un, I’m looking at you. Within seconds of hearing Nobuyuki Shimizu and Kemmei Adachi’s soundtrack, I became a kid again – carefree and content, ignorant to the stresses of my own life, politics, and the everyday doom and gloom we tend to encounter.

It’s been over ten years since the original was released on PSP, and with most remasters there’s always a worry it won’t hold up, especially when it’s being released on something as powerful as a PlayStation 4. The thing is, LocoRoco feels at home; it looks sublime, sounds like a completely fresh videogame, and the straightforward control system means you can play without thinking too much about it. It’s an escape – a way to play something that doesn’t stress you out or give you a heart attack. It isn’t putting you on the edge of your seat and it never asks you to give it your attention every second you’re playing it. The premise is this: the evil black blobs of the Moja Corps have invaded your world, and you must stop them – somehow. I’ll be honest, I never really understood what they want from the blobs of LocoRoco, but they can be a hindrance, so it’s best to avoid them. The controls are simple and responsive, allowing you to press L1 to tilt the screen to the left, and R1 to tilt the screen to the right. Pressing both shoulder buttons together will make you jump, and when tilting the screen in a certain direction, your LocoRocos will move that way.

It’s not a difficult game – you can’t die no matter what happens to you, but you can lose members of your posse. There are flowers located through the levels and hitting one will give you another LocoRoco, and depending on what part of the level you’re on, they’ll either separate or come together to form one big blob. Sometimes, the levels will have tight spots to get through, so there’s no chance you’ll be able to get through unless you press Circle to burst the blob and disperse the choir of flubber. The reason the game is so much fun – for me at least – is down to the music. The LocoRocos are a happy race, and they sing all the time. For most of the game’s 40 levels, the songs are varied, and always have a spring in their step. You can’t help but smile at the melodies and the way the little dudes seem so happy when harmonising. There are certain points in the levels where your troupe will sing a song that projects from your controller’s speaker, and it’s so sweet and joyful. It’s a game that wants you to be happy, at the same time trying to do something different. Even after 10 years, there are few games that have done anything remotely similar, or more so, as good as LocoRoco.

The visuals are so crisp, and the colours are bold and bright. You’re never overloaded with a messy palette of choice, and some levels only use 3 or 4 colours, but they work. Hohokum was clearly inspired by LocoRoco, and both have an excellent visual style, namely thanks to the colours they use to build their worlds. Each level has lots of collectibles, but it wouldn’t matter if you didn’t pick up a thing as you’ll still progress. There are, however, collectibles that’ll give you new items to build up your LocoRoco house, but honestly, I wouldn’t waste your time. Again, there are a few mini-games in the menu screen, but they’re nothing to write home about.

LocoRoco Remastered is a game you play in short bursts, whether for the music, the intuitive controls (you can switch on an option to tilt the controller as opposed to pressing L1 and R1), the bright and happy aesthetic, or simply to block off the outside world for a few hours of unadulterated happiness. It’s so good to go back to LocoRoco, and it reminds us how underappreciated the PSP was. Not only does it feel at home on the PS4, it begs the question whether we may get a VR version, or a completely new entry into the series.

A tad on the easy side

There are few rhythm games that are as joyful or as fun as this. If you need a happy place, this should most definitely be it.