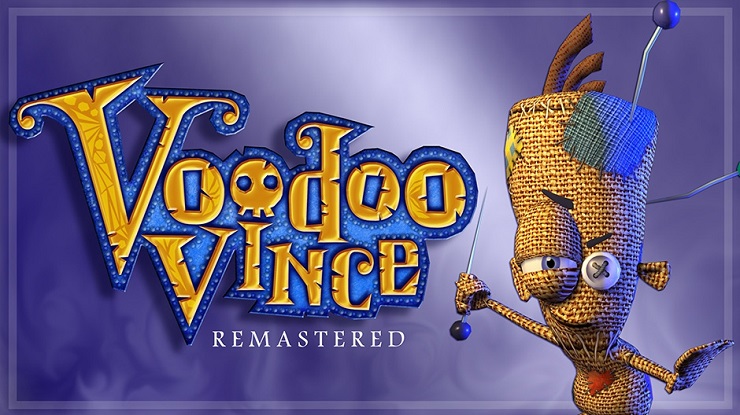 Nostalgia’s a funny thing, isn’t it? Memories of classic games, calling forth a fondness for reliving those old experiences, usually via returning to the original consoles. It’s exactly why retro gaming is such a huge market right now. But it’s also a double-edged sword. What if you go back to that game you loved twenty years ago, only to find that it hasn’t aged as gracefully as you’d hoped? Sure, it’s likely some of them will look a bit blocky if they’re early 3D games, but what if the gameplay was shoddy?

That’s precisely what has happened with Voodoo Vince Remastered.

You might be forgiven for thinking that, back when Microsoft announced it was remastering its old Xbox platformer, that it might have actually, you know, remastered it. Nope, it’s pretty much a straight port of the original game, albeit upscaled to fit today’s 1080p minimum requirements. This means that textures are blurry, edges are rough, and everything still looks like a game from 2003. There’s nothing wrong with a simple port, but that’s assuming the game was smooth and relatively free of flaws to begin with – and Voodoo Vince definitely wasn’t free of flaws.

In a time when Jak & Daxter had arrived on the scene, joined on Sony’s PS2 console by Ratchet & Clank, and Nintendo’s Gamecube had the sublime (and underappreciated) Super Mario Sunshine, the Xbox struggled to find its feet in a lucrative genre. Blinx the Timesweeper didn’t set the world alight, and so Voodoo Vince was the Xbox’s second bite at the cherry. But again, it tasted sour. The Xbox brand has always struggled in the platforming market, never managing to find its mascot in a world where Playstation has Jak & Daxter and Ratchet & Clank, not to mention the forthcoming Crash Bandicoot remaster, and Nintendo’s magnificent plumber can never quite be moved from centre stage. Hell, Sega lost its console war and still survived with its Sonic mascot intact (despite some rocky times, as we all quietly pretend that Sonic ‘06 and Sonic Boom never existed). But Microsoft, despite all its power and money, and all the enthusiasm in the world, just can’t get a foothold in the platforming genre.

This makes it all the more baffling that Voodoo Vince Remastered wasn’t a full remake. The Xbox One is coming under fire for its lack of 2017 exclusives, so why not fully remake the sarcastic little doll in 1080p? Correct the mistakes of the past and fix the flaws in a potentially fun game, and maybe this review could have been far more positive. But let’s dive into the game and find out why this isn’t a positive review, shall we?

It begins in a sleepy town in the French Quarter of New Orleans, and Madam Charmaine’s voodoo shop is broken into by a pair lumbering brutes intent on stealing her Zombie Dust for their boss, Kosmo the Inscrutable. They unwittingly unleash the dust over the world, warping reality and bringing to life the voodoo doll sat on a shelf. After they escape with the Zombie Dust and kidnap Madam Charmaine, Vince jumps down from his shelf and is prompted to begin his quest to save his owner.

This quest primarily involves running and jumping around various locations in New Orleans and the Bayou, collecting bottles that can extend your health and pages to extend your magic. This magic comes in the form of Voodoo Vince’s amazingly unique feature: harming himself, in order to kill enemies. He is a voodoo doll, after all. Collecting magic totems will unlock fun new ways to kill poor little Vince, from chainsaws to acid, and they’re always inventive. But this unique feature isn’t used to its full potential. Because they’re essentially one hit kills with an area of effect, you’re restricted to very few uses. Pressing RT and LT together will unleash a random move, sending out a shockwave that will kill any enemies it touches, in the exact same manner that Vince murders himself. Bosses are slightly different, as they usually involve their own, contextual kill – one of which involves throwing Vince into a pit of spikes multiple times, from a great height. It’s such a shame that this feature was so restricted, as it could have been the game’s equivalent of Ratchet & Clank’s wonderfully weird arsenal of weapons, or Mario’s costume changes. Even basic combat should have used this feature in some way. Instead of spin attacks and throwing punches, Vince should have punched himself, in close proximity to enemies, and it could have added an amusing and relevant touch to a game based around a Voodoo doll.

This missed opportunity is echoed in the game’s humour, as well. You get the feeling that it’s a game very much of its time, trying to ape the humour of a certain subset of Nickelodeon cartoons from the late 90s and early 00s, which doesn’t quite hit the spot anymore. The villain of the piece, Kosmo the Inscrutable, is basically a stereotypical nerd, voice cracking and nasal. He’s supposed to be awkwardly funny, but only ever comes across as just awkward. Vince is sarcastic and dry, but his lines fall flat most of the time, due to some really phoned-in voice acting and some strangely muted audio mixing.

Most of the sound in Voodoo Vince is either too loud or too quiet, no matter how much you mess with the volume settings. You’ll soon tire of the swishes of Vince’s punches and the pitter patter of his little feet as he slowly runs around the levels. But the music is where the audio finally gets to shine, with its classic jazz and blues tunes that perfectly accompany the New Orleans setting. The art style of almost every level hits that design spot, too. It really helps that it has a bit of early Tim Burton (back when he was actually good) about the character designs, with oddly gangly or impossibly chunky humans, and some really angular creatures – and not just because of the technical limits of the original Xbox.

The current lack of those technical limits makes the performance of this “remaster” all the more baffling. The sound skips from time to time, even causing delays that see voices out of sync with mouth movements. Visually it’s also a shocker, with low resolution textures all the more apparent when viewed at 1080p, and the animation is incredibly clunky. Somehow, it even has regular occurrences of slowdown, which might have been acceptable in the original game, but in a remaster, on a console that’s vastly more powerful no less, it’s a real poor showing. Voodoo Vince’s level design isn’t exactly great either, with overly large, empty environments that exist only to pad out a game that would actually have benefited from being shorter. Even when it tries to change things up with a flying sequence, it feels dull and lifeless. Almost every new section becomes a slog, especially when you’re tasked with meaningless fetch quests, which is the main hook the developer uses throughout the game.

The controls are at least simple enough and get you around without too much hassle, even if the physics are a bit erratic. Vince can grab ledges if you fall short, but only if the game decides to, leaving you at the mercy of fate – and fate is fickle, it seems. When you have a finite number of lives, the overuse of bottomless pits can really frustrate.

Voodoo Vince was a middling platformer at best, when it released back in 2003. Releasing it again now just reaffirms this, especially now that we’ve had games like Super Mario Galaxy, and then there’s the Ratchet & Clank reboot which really does show off what a remaster should be. Voodoo Vince Remastered is not only a laughable title, it’s a poor advert for the Xbox brand as a whole, at a time when its fanbase is already worrying about the future of its console.

With Xbox coming under fire this year for its lack of exclusives, this lazy port of a boring platformer is not going to win anyone over.