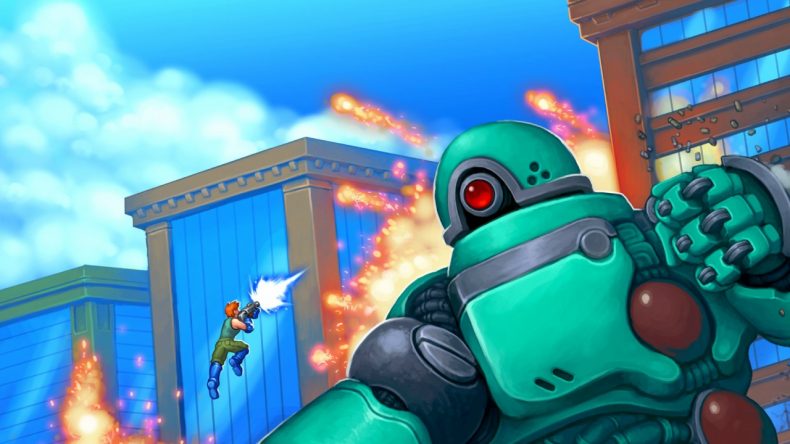 I’ve played some tough games in my time. All the FromSoft games and the various pretenders to their throne, Battletoads, Super Ghouls ‘N’ Ghosts, N+, Super Meat Boy, Furi. I’ve taken them on. Some of them I’ve even beaten. But Mechstermination Force, from Hoberg Productions, is kicking my arse all over my living room.

Part of its strength is deception. It’s a liar of a game. It looks friendly, you see? It’s brightly coloured, animated like a cartoon; the soundtrack is 100% throwback – as is much of the gameplay. The promo art looks like something 10-year-old me would have been desperate to watch on a Saturday morning. The biggest issue I have with it is that it’s very fair, but doesn’t feel very fair. It actually evoked memories of my childhood bullies who would pretend to be my friends so I’d talk about board games and Nintendo and collecting Boglins and wanting to be a writer and then use that to torment me. It invites you in with its silly cartoony bosses and its twee soundtrack, and then it beats you up and takes your lunch money.

You might think I’m exaggerating, but I’m really not. It’s nails.

The premise is a simple concept: your elite soldier (you can choose from 4) is part of the MF, a task force who use advanced technology to combat the army of colossal mechs laying waste to humanity in the year 2024. It’s a side-scrolling shooter with more than a hint of Contra about it, although there are no stages, as such; instead, it’s a boss rush game where every mission sees you face off against another towering monstrosity.

Some mechs are shaped like animals – a giant centipede, for one – while some are humanoid. One becomes a giant mechanical crocodile head once you’ve destroyed its humanoid form. All enemies have two types of weak spot, red and yellow. The red can only be destroyed with melee attacks, while the yellow can be also be shot. Usually, the objective is remove an enemy’s armoured plating, then destroy the red spots, and then the yellow. Shooting areas you can influence in some way will make them glow red. This could be a mech’s foot, which it will raise to allow you access underneath, or it could be a hand you need it to lower so that you can climb on top and make your way to the head. Throughout the game you’ll unlock various power-ups, including a flamethrower and a pair of magnetic gloves that allow you to cling to metal surfaces, such as the underside of a mech or certain walls.

This being a boss rush, the difficulty comes from failing over and over, until you learn every attack and movement in a given phase before moving onto the next and repeating the process until you win. Death has no real consequence aside losing your progress in the fight, as well as the temporary hearts you can buy before each mission to extend your health.

There’s a great variety to the boss designs and the signposting is clear, but the loop of attacks is constantly switched up, and your character is so small that I found it easy to lose sight of them during certain attacks. In particular is one mech who pounds the ground and unleashes a wave of fire at you. It never looks like you’ll make the jump, and I lost view of my little badass every time I did it. You really do need perfect timing to make use of the signposting too, as the enemy will switch between attacks pretty quickly and if you miss a window to do some important damage to a specific weakspot, it can cost you health that you probably won’t get back. Curative items do drop during flurries of coins, but they’re incredibly rare. I lost count of the amount of times I broke through the first phase of a fight with barely half a heart left and just thought “Welp, guess I’ll die then,” and then did exactly that at the very first brand new attack I couldn’t prepare for. A certain amount of trial & error is expected in a boss rush game, but I found it particularly hard in Mechstermination Force to comfortably learn the attacks of the first phase, and instead often fluked my way through it only to have to start again when I inevitably failed. It’s not helped by the slightly weird control scheme, where the triggers cause you to duck instead of just pressing down, and it’s the only way to stay in place when you shoot. During the more bullet-hell-like moments, it feels fiddly and counter-intuitive.

But it is fun. The movement is quick and fluid, the enemy design is cool and the aesthetic is effortlessly pleasing to the eye. It’s a perfect fit for the Switch, too, and looks and feels better on the handheld than on a TV. The little hub between missions has a shop to buy weapons and upgrades, as well as an arcade cabinet that for some reason allows you to go back in time and replay missions as training – but the coolest thing is a radio tower you can easily miss, which allows you to cycle through the awesome 90s soundtrack.

If you’re a fan of boss rush mechanics then you already know what you’re in for. The difficulty punishes any mistake you make, but the feeling of accomplishment after each victory makes it all worthwhile. Well, mostly. The level of challenge feels a little uneven from time to time, but overall Mechstermination Force plays and looks great – just don’t let your guard down.

If you’re a fan of boss rush then you already know what you’re in for with Mechstermination Force. The difficulty is punishing, but the feeling of accomplishment after each victory makes it all worthwhile. Well, mostly.