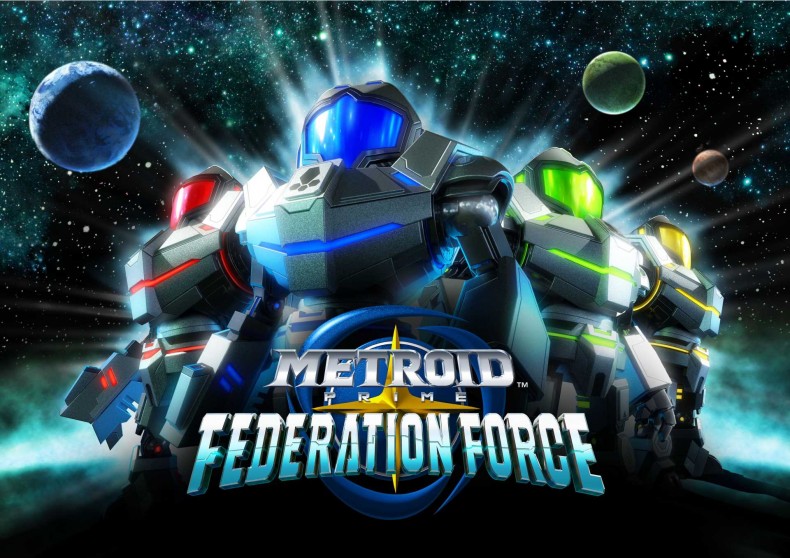 This isn’t a Metroid game. Can we get that bit over and done with? The sense of isolation and exploration on other worlds, combined with the need to grow in power and return to previously visited locations to bypass previously blocked off paths? None of that here. Nope. But it does bring the more action-orientated elements of the Metroid Prime string of games to the Nintendo 3DS.

Federation Force is a series of bite-sized missions that are suitable for 1-4 players in a similar way to last year’s multiplayer Zelda spinoff, Triforce Heroes. The onus is most definitely on playing with others in a co-op fashion, ideally in a team of four. This is clearly indicated by the nature of solo gameplay, where the game gives you an item that offers bonuses to attack power and defense, which is only available in the single-player mode, as well as the ability to bring up to three drones with you, to make up for the missing players. Don’t worry, lone gamers, I finished the entire game solo, so you don’t have to play with others if you don’t want to.

While series veterans are used to playing as famed bounty hunter, Samus Aran, this time around, it’s all about playing as members of the Galactic Federation: the galaxy’s team of peacekeepers, who occasionally work with Samus on missions. You’ll be in a fully-armed mech for the majority of the game, although there are some instances where you’ll be out of the safety of your metal can, and stealthing around in a very vulnerable, defenceless state. Each mission has a primary objective that needs to be completed, as well as a secondary one that can be achieved for bonus points. Points mean medals, which unlock various ways to customise your mech – of which there are plenty. You’ve got your unlockable skins (which include a handful of amiibo ones for the compatible Samus and Zero Suit Samus figures) which also offer bonuses that allow you to carry more auxiliary weapon ammunition with you. Then, you have mods: chips you can equip that are found in each level and can be fitted to up to three unlockable slots in order to make use of a multitude of bonuses. Some will last forever, while others will actually break if equipped while dying or failing a mission. When found in each level, solo players will be able to take all of their collected mods at once, but in multiplayer, the team members with the highest score will be able to pick first (until all the mods have been chosen), meaning that it’s ultimately in your best interest to get the best individual performance, even if you are technically working as a team. It’s also possible to change the voice commands you can issue to other players via the D-Pad, and even the pitch of voice your character has.

Just before it’s time to ship out to the mission, another totally un-Metroid-like mechanic comes into play: you have to customise your loadout. You’ll be given a selection of defence items, offensive weapons, and utilities, but each one takes up a certain number of slots in your inventory, and as you can imagine, your inventory is finite. Not every item or weapon will be available for every level, and the game is almost suggesting that you experiment to figure out the right tools for the job, although I got by just fine by loading up with missiles and health packs for practically every mission, and then bringing along an elemental weapon, depending on which of Federation Force’s three planets in which the mission is set.

If you’ve played any of the Metroid Prime games, you’ll instantly be right at home with the controls. Prime’s lock on-centric mechanics were always a divisive one for FPS fans, but here on the 3DS, it still works great. “L” locks on, “R” allows you to free look with divisive gyro controls, while both together allows you to lock on and amend your aim slightly by tilting your 3DS, which is extremely useful for tackling fast-moving foes like Space Pirates. It’s all relatively simple and fits extremely well on the system. Bar the chibi-styled design that pervades all of Federation Force, it looks and feels like a fully-fledged Metroid Prime release, which only serves to remind you once more of what this game could have been.

It’s not like the 3DS isn’t capable, either. Most of the elements are there, and criminally it’s missing the series most crucial components: the atmosphere and focus on exploration. The framework is exactly what you want from a portable Metroid Prime, and there’s always constant mentions of what Samus is up to. For the most part, you’re either cleaning up after her, or using intel from her to fulfill a mission, and you cannot help but feel like you’d rather be doing what she’s doing. Especially when most objectives are “kill this” or “go to this room and use this terminal”, as well as a few escort-style missions where you’re delivering something from one place to another, which can be frustrating when playing alone.

But, instead of griping about what Federation Force isn’t, I can’t knock what it actually is: an excellent FPS on a portable. It plays well, the environments look great, and there are some great missions that stray from the usual template. It’s clear that the best fun is to be had online, and although the 22 missions won’t take you too long to finish, there are a total of three medals on each level to earn, as well as a hard mode that gives you another set of missions to unlock. Much like Triforce Heroes, your longevity is likely to be dictated by how much you want to play online or locally with friends.

Blast Ball, though, (the mini-game that offered us our first glimpse of Federation Force back in 2015) is not particularly fun, and lacks depth. I did manage to get a few online games, but each one involved a mad dash at firing at a giant ball to get it into the opposition’s goal. And that’s it. There are very few reasons to return to it after a couple of games unless you have friends to play with.

Ultimately, Federation Force isn’t really a Metroid game at all, then, but it is a relatively fun game that is actually quite enjoyable once you stop thinking about what it isn’t, and enjoy it with some friends online.

Prime’s mechanics, perfectly replicated onto the 3DS
Lots of options for customisation
Some very fun levels

A decent team-based shooter that will disappoint hardcore Metroid fans, but is enjoyable enough for those who don’t have lofty expectations of what this game should be.

You may also like
metroid prime: federation forceNext level games