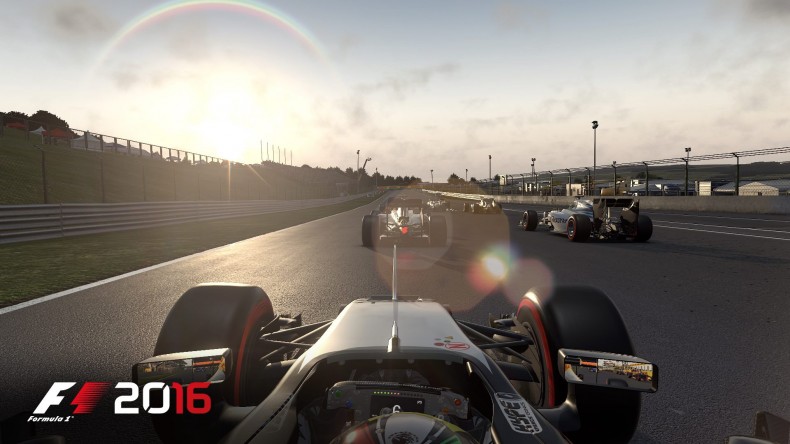 I criticised last year’s iteration of Codemasters’ F1 series for its lack of a career mode. Without any meaningful sense of progression. It meant picking anything other than a Mercedes was pretty pointless, be that in a single race or over a championship season.

Codemasters has taken on the criticism it earned last year and built upon it. F1 2016 features a fully-fledged career mode, spanning ten seasons. Starting at any team on the grid, you pick a name, an avatar, and you’re off. You’re eveloping your car, getting into rivalries and earning lucrative contracts to the top teams, and it’s all told in-between races in your team’s spacious pop-up headquarters. It gives context to the races that was sorely missing last year – the drama of petty squabbles and technological advances, set against the backdrop of the World Championship as the sport jet sets across the world that fans expect from Formula 1 each season, but never seem to actually get.

Outside of the career mode, there’s a Pro Career, which is basically having hardest settings enforced. There’s the usual quick race and Championship season – a strange addition alongside a career I always think – and of course, multiplayer. The latter has various race lengths, as well as full seasons, with personal lobbies allowing you to adjust the amount of laps and disable assists as you see fit, as well as turning off collisions and damage – a godsend when playing with the masses. On-track, to paraphrase Murray Walker, F1 2016 is unique, except for last year’s iteration, which is identical. Cars have a tangible sense of grip, and you’ll soon learn where their limits are. The AI will brake late, attempting risky overtakes and jockey for position amongst themselves. Happily, they’re also fallible, out braking themselves, getting into incidents and occasionally cutting corners. They seem very real, even if they do have a tendency to hold their line when they should give it up, and rain affects them far more than it does you.

Historically AI difficulty has been an issue with the series, one setting being far to easy, the next just too hard, something that’s fixed here, even if it is a little inconsistent: a 3rd in Spain was followed by last in Monaco – by some distance – then a storming win in Canada. That the AI doesn’t seem take into account track difficulty is strange, if only because each track has a difficulty rating in the quick race options, meaning it’s something Codemasters is aware of.

Even stranger is the fact that the biggest improvement this iteration brings is to make practice sessions not only relevant, but downright enjoyable, all done through three development programmes. Acclimatisation teaches you the racing line around each track, using gates on the entry point, apex and exit of each corner. The tyre management programme then teaches you smooth driving, tasking you with maintaining a certain level of wear while lapping to a prescribed time, while the Qualifying simulation tasks you with driving quickly. They’re addictive by themselves, but the better you perform in these, the more R&D points you’re awarded to spend on upgrades. The development system is excellent, with more points awarded to the teams lower down the grid. Best of all, your competitors will improve as the season progresses as well, with the midfield battle particularly tight. Extra points are awarded for performing well in qualifying and the race, and you’ll find yourself reattempting the practice programmes before long, desperate to eke out the maximum points on offer.

Elsewhere on-track the rewind feature is back, allowing you to erase any mistakes you make. Unlimited, the only punishment for using it is a slightly lower career score (a running tally that takes into account difficulty, position and rivalries, and compares it against your friends online), although it removes the element of danger that is central to F1.

In a first for the series, you can perform the formation lap at the start of a race, managing tyre temperatures, which is a nice level of realism, and the safety car and the virtual safety car make an appearance, the latter forcing you to aim for a certain lap delta, which is trickier than it sounds. Manual clutch starts are also in – all of the above are optional – and give a surprising buzz when pulled off correctly.

The race engineer radio is back, providing distances to your rivals, strategy suggestions and more. As in past games you can ask questions from prescribed list, but trying to read through them while driving is all but impossible. The same goes for the damage and temperature data you can pull up on the fly: it’s nice to have, but basically useless at best, an annoying distraction at worst. The presentation elsewhere fares much better though. This is the slickest Codemasters’ series has ever been. The pre-session punditry between David Croft and Anthony Davidson is backed by sweeping shots of the track that mirror actual camera shots from the races, as well as close ups of the drivers and crews in the garages. There are nice touches all over, such as seeing other drivers climbing out of their cars at the end of a race. It all just feels so alive. Admittedly it isn’t the best looking driving game on the market; crisp menus aside. Cars and tracks aren’t too bad, but they’re no DriveClub, and the less said about people like your agent and R&D developer the better.

As positive as the above is, F1 2016 is a tricky title to judge. The career mode is an excellent re-addition after last year’s backwards step and, with slick presentation, realistic damage et al, this is unquestionably the best iteration in the series. It’s a massive shame, then, that the various issues roughen the edges. The AI can be infuriating when it causes you to crash, as can some of the tighter tracks, which require expert precision to navigate safely. The issue may be one of scale. Real races play out over an hour and a half or more and, while it’s possible to do this in game, the 25% option is the one most time-strapped gamers will choose. In 15 or so laps, though, stopping twice to change a damaged front wing effectively ruins your race, as there’s just not enough time to make it back up. And, for all of the television presentation, after a few sessions you’ll be skipping most of it to get back into the action, and it’s incredibly jarring being referred to as ‘a McLaren’ by the commentators for a whole career.

Once you learn to deal with it’s idiosyncrasies, F1 2016 is a bloody fun racer. When it all gels it feels fantastic (especially when played with a wheel), it’s just a shame that there’s the occasional car crash along the way.

Once you learn to deal with it’s idiosyncrasies, F1 2016 is a bloody fun racer. When it all gels it feels fantastic (especially when played with a wheel), it’s just a shame that there’s the occasional car crash along the way.