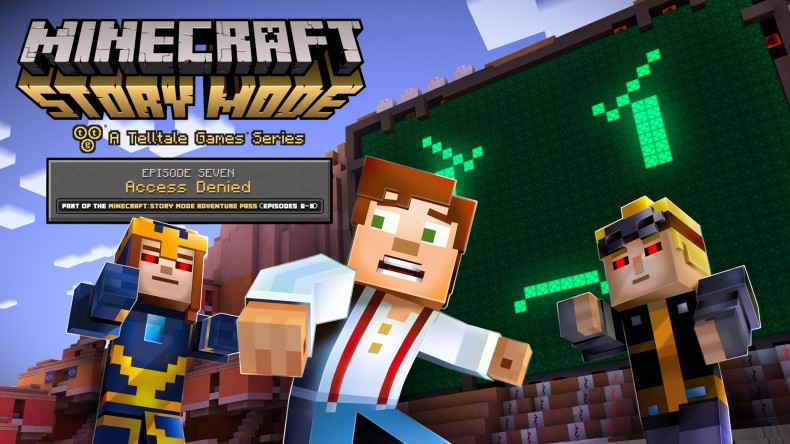 We are now on to episode seven of Minecraft: Story Mode but at this juncture, with each episode since the fifth one being largely standalone, the number doesn’t really bear any relevance. We’re still following the loose, over-arching storyline of the Old Builders and our friends, Jesse, Lukas, Petra and Ivor trying to find their way back home, but Access Denied still manages to stand on its own as a self-contained story.

Things seem to be moving along at a much faster pace now that the stories are being told within one episode, and this feeling is helped on considerably with Access Denied being another short episode and with no late title sequence. The credits appear immediately with an extended montage of the gang running into and out of the various portals leading to strange worlds. Once we do get control again, our friends enter a new portal and the story begins. I was disappointed with the last entry, A Portal to Mystery, as I felt that the fan element with the introduction of the YouTube “stars” detracted a little from the quality of the first few episodes. I am pleased to say that Access Denied is a better overall entry than the previous one with a fun storyline and some quite clever little jokes. However, I still feel that the smaller, self-contained stories are exposing the pointlessness of the decision-making process that characterises Telltale’s style. It is hard to feel anything about the choices you make because the story ploughs on regardless of the decisions you make. Despite this, Access Denied is still fun to play.

Our team begins their journey in a barren land, this time set in the Mesa biome, and we are quickly introduced to a mystery in the form of zombies in the daylight. Our friends find a village (again, beautifully detailed with lots of new ideas for buildings to try in your own Minecraft worlds) and it seems the villagers are themselves a form of zombie or automaton with strange redstone circuitry in the back of their heads. It is then down to our band of heroes to solve the mystery of why villagers are acting this way, fix it and then find their way out again to finally get home. As with A Portal to Mystery, Access Denied has a number of nods to other genres of storytelling, and as mentioned before, some lovely little in-jokes about gaming in general. There is Ivor’s quip about getting out of trouble using “[…] the power of our imagination”, referencing the ‘make your own story’ nature of Minecraft itself; then there is the baddie that borrows heavily from the likes of Portal, as well as a delightful little skit on the forthcoming virtual reality functionality of games like Minecraft. It’s a pleasant little story, made charming by the animation and characters we’ve been with since the start, even if it doesn’t feel all that original.

Access Denied also does a good job of quickly building up the character of the mystery woman our friends find. The short runtime doesn’t allow a lot of room to do this, but there are some really interesting techniques that Telltale use to try to get as much information about her as possible without endless dialogue trees. It is moments like that where the game does stand out and it’s a shame that these additional episodes haven’t been given a bit more time to be more fully fleshed out as there is some talent on display. As it stands, Access Denied, as with those episodes before it, feels a little rushed. The shorter run time means that there isn’t an awful lot of interactivity to be had — there is some mild problem solving, some crafting, a few fight sequences and thankfully not many conversation trees. The lack of this branching dialogue feels welcome as it allows for a smoother pace, but on the other hand, makes you feel a little short changed in the ‘game’ department.

Access Denied is a better episode than the previous one. The story, although not original, is fun with some strong character moments and a few decent action set pieces, but the length and lack of interactivity overall could make you question the value of these standalone episodes. Once again, I am sure that young fans will delight in what is on offer here but there is no escaping the feeling that Access Denied and previous episodes could have been much better had there been more time allocated to producing them.

Access Denied is a better episode than the last, helping to refocus on the Order of the Stone's adventures, but the standalone nature of the stories are really exposing the weaknesses of the Telltale model.