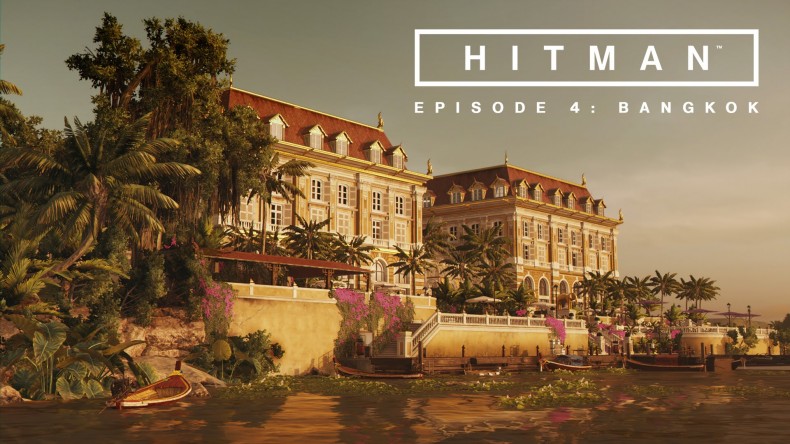 I’m a big advocate of the staged release method Square Enix has gone for with Hitman. It allows every one of the levels time to breathe, and as a player, plenty of time to explore and squeeze every ounce of value for money from their small, yet dense missions. I can’t help but think if we ended up getting every level in one release, some of the smaller details and finer moments of gameplay may be missed. Once again, Hitman ticks every box and if you’ve loved the previous missions, Bangkok doesn’t exactly rock the boat enough to dispel current fans.

This time around you’re in Bangkok, gunning for the young and arrogant frontman of a band called The Class along with his lawyer. Within the first five minutes, I’d bumped into his lawyer and subsequently offed him from behind one of the hotel’s lovely pruned bushes. Jordan Cross, the gobshite lead singer, was a bit tougher. The series isn’t getting easier from my experiences — I just feel the targets are too readily available in Bangkok. You still get the opportunities and the standard distractions, poisons and concealed weapons for use, but I’d managed to complete my first playthrough in under an hour. Club 27 is a sunshine-filled haven, full of stunning architecture and a menagerie of exotic plants; the hotel has been beautifully designed and continues to do the series justice in terms of the art direction. Hitman has been one of the best looking games of this generation so far, and Bangkok is yet another visual masterpiece. The golden sun shines through the grounds and glistens beautifully in the sky, giving a weird juxtaposition between the golden utopia you’re walking around in and the cold, grim assassinations you’re indulging in — IO really has got the visuals down to perfection.

Like Sapienza, Paris and Marrakesh, the environment feels alive. NPCs are once again living individual lives and no two characters look or feel the same. The hotel manager greets you with an overbearing positivity and the blokey fronts of the band’s roadies are just part of Bangkok’s various personalities. With the setting sharing more in common with the Paris missions, everything feels claustrophobic and escaping from a hit ends up being the hardest part of the contract.

After killing Cross, I found it really tricky getting off the roof and down onto the boat. I found a balcony on the second floor and spent about 5 minutes hanging off it to evade the guards. Every time I thought the patrol had calmed, I climbed back in but aroused suspicion on almost every attempt. Luckily I found a dude having a cigarette so I jumped him, stole his clothes and walked past the two guards on the door and the enthusiastic hotel manager, scot-free and clear from losing my cover. It was stressful, challenging and frantic but these are the moments that make Hitman so special. Between the various missions, there are cutscenes that attempt to tell a story about why you’re assassinating the people you’re after, but they don’t do anything special and are all pretty bland. The narrative comes from the way you play and I’m okay with that. I love how every assassination I’ve made in Hitman is completely different from the last: making my own story in these glorious locations, among the hundreds of extraordinary characters I’ve met.

Bangkok is more of the same – more sneaking, killing, listening and waiting. If you’ve loved the previous missions, I doubt you’ll be disappointed and if you’re looking for different ways to take out your targets, Bangkok offers a range of opportunities. I still regard Sapienza as the best entry to date, but Bangkok is a valiant effort and another solid entry in the series.

Easier than previous missions
Cut scenes are generic and bland

Although the Hitman Bangkok mission isn’t as good as others, it’s still another solid entry into a well-crafted series -- providing stunning visuals and varied opportunities to kill.

New Trailer for The Walking Dead: Episode Three: Long Road Ahead – Out this week