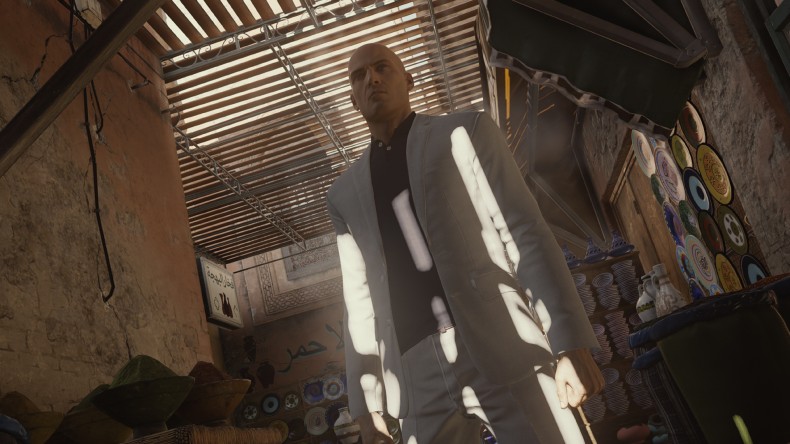 Square Enix have announced that Hitman’s third episode, which takes place in Marrakesh, will launch on May 31.

“Marrakesh promises players the lure of voyeurism and the thrill of infiltration and it’s something we’ve been working hard on getting just right,” writes Travis Barbour of IO-Interactive on the PlayStation Blog. “Offering two targets, the “Gilded Cage” mission challenges players to eliminate private banker Claus Strandberg, holed up inside the secure Swedish Consulate, and army General Reza Zaydan, protected by his elite squad of soldiers at a temporary headquarters in the heart of the city. Both targets will be challenging to reach and both will of course have some entertaining special moments attached to them that will allow players to dole out some poetic justice.” “Marrakesh has been built with a maze of alleys, a range of souks that line the medina walls and a fully fletched shisha café,” he continues. “Moving upwards, players can enjoy the shade on the signature rooftop terraces of Marrakesh.Just beyond the busy marketplace, you will find an architectural marvel in the shape of the Swedish Consulate building. The very embodiment of minimalistic Scandinavian design, a mix of glass, concrete and wood offering a powerful contrast to the blazing heat just outside its walls.”

Episode 3 will release on May 31 on Xbox One, PlayStation 4 and PC.

Currently an English, Journalism and Creative Writing student at the University of Strathclyde. Based in Glasgow, I spend most of my free time playing video games ranging from Japanese visual novels to horror games. You can contact me at greg@godsiageek.com!
MORE LIKE THIS
Episode 3HitmanIO Interactiverelease date

New Trailer for The Walking Dead: Episode Three: Long Road Ahead – Out this week