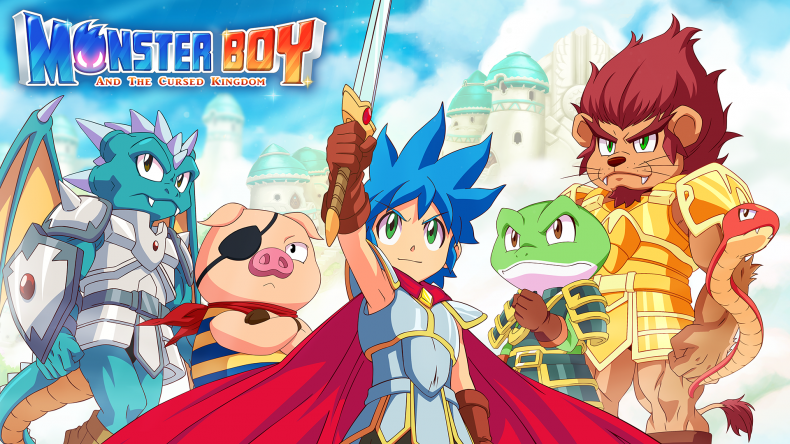 It’s been one hell of a year for video games, and an even better year for those of us who get to play them. Whether you’re a fan of open worlds or multiplayers, indies or AAAs, there’s been something for everyone, and as we reach Christmas and the final moments of 2018, surely the best of the year is behind us?

Monster Boy and the Cursed Kingdom is a remarkable game. If you were fortunate to play the recent remake of Wonder Boy III, you’ll have a pretty good idea of what to expect, and even though Monster Boy has been developed by an entirely different team, its classed as an official follow up to the series. It builds upon the mechanics of The Dragon’s Trap, bringing in fresh ways to play the side-scrolling platformer title whilst showcasing a stunning art style and equally fantastic score. You play as a young boy named Jin, a blue-haired rapscallion who’s trying to stop his Uncle Nabu from turning all of the world’s inhabitants into animals. He’s a bit crazy, and as you’ll find out, Jin himself gets turned into a variety of animals on his travels, except they all play a vital role in how you progress through the game. You’ll end up transforming into five different animals along the way, with each one providing different abilities to help you, and at times specific puzzles will require you to mix it up and use all of them to succeed.

For example, when you turn into a pig (and a pirate pig, no less!), you’re given the ability to sniff out hidden doors and treasures. There’s also a frog that can swing across specific areas, a snake that can sneak into smaller passageways, a lion who’s super strong and can break through blocks, and a dragon who can fly! They also have their own special brand of attack, with Jin, the lion, frog, and dragon all being able to equip specific weaponry and shields. You’ll need to use them all for different challenges, allowing Monster Boy’s own brand of Metroidvania to come into play. Each new character has their own animation, and no doubt you’ll find a favourite. Mine has to be the pig, if only for the little farts he so loves to let off. The animations are nuanced, but manage to give each character a personality of its own, and when you’re blessed with such a gorgeous anime art style, there’s so much to appreciate in every environment you come across.

Like Wonder Boy III, you’ll meet a variety of enemy types, each with a different kind of attack. Some use their power to hurt you, others use their speed and agility, whilst others fire a range of projectiles at you, making you mix up your approach for every area, and you’re never sure what’s right around the corner. It’s designed beautifully, and even though it’s a simple platformer, there’re lots of hidden passageways and secrets that can only be discovered once you’ve unlocked the various animal transformations, giving you plenty of reasons to revisit areas you played nearer the start. The various environmental puzzles feature a plethora of switches, platforms, and obstacles you’ll need to get around, and having the ability to change your character at any time (unlike in Wonder Boy III) means there’s always a way forward, but certain challenges require a bit of thinking to overcome. None are too difficult, but more often that not you’ll need to spend a bit of time trying to work out how to solve them. Due to the fluidity of movement and combat, it’s satisfying to play, and even though certain enemy types are difficult to fight against, the feeling of euphoria after making your way through a particular tricky part is highly rewarding. Boss fights can also take many attempts, but as the trial and error of Monster Boy is never laborious or frustrating, victory is rarely too far away.

The world of Monster Boy and the Cursed Kingdom is filled with interesting NPCs and so much detail it’s hard not to fall in love. A simple trip through the markets of your village fills your soul with happiness, as you see the various animal forms and the phenomenal design in each one. The music is reminiscent of Wonder Boy III, with each track bouncing along – rousing at times – and altogether drenched in charm and pomp. The anime cutscenes also help to bring the game to life, making it a real pleasure to not just play, but experience. There’s also a healthy upgrade system too, and plenty of items that help you along your way, making it a well-rounded title with plenty of reasons to keep on playing. Monster Boy and the Cursed Kingdom has everything you could want from a platformer. It oozes charm and offers copious unique challenges, all wrapped up in a stunning visual style serenaded by a magical score. If you loved Wonder Boy III: The Dragon’s Trap and want a game that far surpasses what it offered, look no further than this; you won’t be disappointed.

There's so much to love about Monster Boy and the Cursed Kingdom. From the beautiful visuals to the variety in combat and movement, there are so many reasons to give it a try.