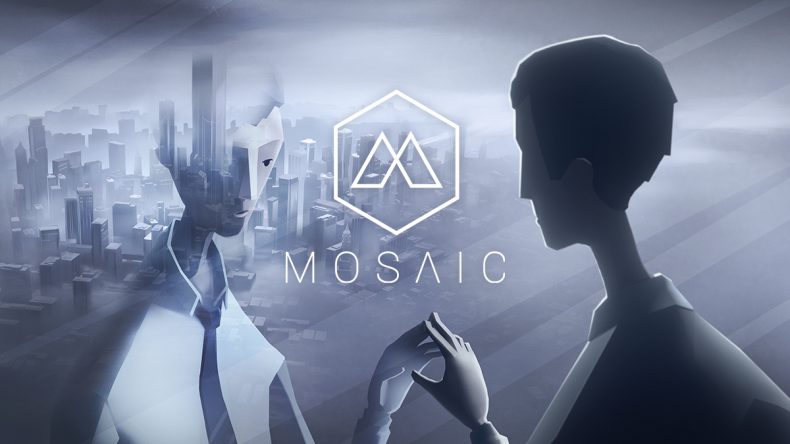 The saying goes that life imitates art. In the case of the Mosaic console release, it is more a case of art imitating life. All the way down to the minute banalities of everyday life in a crappy dead job.

First off, Mosaic is pretty bleak. The team at Krillbite has taken the worst things you could possibly imagine about working in said crappy job and throws it at you all at once. They even go into the serious effects it can have. This is where the main character comes in.

You play as an unnamed office worker and it’s up to you to guide them through their mundane everyday life. It heavily implies that this life has sent them on a spiralling depression. These messages are less than subtle when looking at the text messages you receive from friends like; “Alright, if you don’t want to answer that’s fine. I’m not going to try to keep this friendship alive if you don’t want to put in any effort yourself.”. It’s even more obvious when they have conversations with themselves or via a floating fish friend with the following being said; ““Why do you keep showing up?” and “When was the last time you spoke to another human being?”.

Add to that the mounting bills piling up on the table, your money app telling you that you have more outgoing than in, and the dating app you eventually install having nothing but dislikes mounting up. Krillbite also pushes the message that the big corporation type businesses don’t care about those at the bottom and only about results. Again, the message is pretty heavy handed from the moment you wake up. You’ll likely have a text message from work, to kindly remind you that if you’re late for work for another X amount of days in a row your contract will be up for renewal/termination. There’s also the additional texts comparing your productivity to other workers.

The aesthetic of Mosaic is also pretty desolate. The world has more versions of grey than you’d find in a paint sample booklet or the title of a certain book series. The odd splashes of colour you do come across are when you decide to go against the flow and find what’s outside of the job and routine.

With the aesthetic getting the look of the mood across, the music for Mosaic backs it up perfectly. It can be hard to find the perfect sound to match up with things like a crappy job, feelings of depression etc., but I think Krillbite nails it. It adds that extra layer that fully pushes the message across.

You do get to see the brighter side of life, like finding cats playing to having a break to listen to some buskers. This is the whole point of Mosaic. My take from Mosaic is that no matter how downtrodden you might feel due to work, there is always that touch of brightness or colour in doing something you love – something that might help make that trip to work seem not as awful.

There is a bit of a story twist but I don’t want to ruin the whole thing by mentioning it here. Mosaic plays well enough but as it is very story driven there is nothing really outside of the predestined path to distract you, other than the a game app on your phone called BlipBlop. The game is literally just hammering the A button to build up enough blips to buy the next level.

Krillbite has done well in simulating some of the tap-based games you’ll find on the app stores and they’ve even tied it into the achievements. If you’re like me and prefer to have your achievements ending in a 0 or 5 then BlipBlop will test your patience. The majority of those that are tied to BlipBlop are for either 1, 2, 3 or 5, which is what sucks you into keep going and get it back to a nice 0 or 5.

If this kind of thing doesn’t bother you then you’ll likely finish the game pretty quickly. For the completionist amongst you, you’ll be in it for the long haul so get those tapping fingers ready as you’ll be at it for a while.

There is a slight puzzle aspect when you get to the day job portion. In a nutshell you need to feed in resources to a company logo at the top of the screen. To do this you create a vertical chain for those resources to travel through to reach the destination. The higher the logo the more resources you need from the base level. Like I say, it’s a slight puzzle but nothing entirely taxing. It does fit in with the setting of a rubbish day job, though, so don’t expect anything mind blowing. I only had one problem with Mosaic which was the in-game phone crashing out on me occasionally. I would be in the BlipBlop game or looking through text messages and the inputs for the phone would stop responding. Exiting the phone was fine and I could get on with the game, but if I got a notification saying that a message was waiting for me I couldn’t access it. The only fix was to quit the game completely which obviously ruined the flow.

It’s hard to accurately describe my experience with Mosaic to be totally honest. While the game itself is good it can be quite a slog going through all the negativity constantly coming at you. I understand the point, but if you have a particularly bad day, for whatever reason, and you try to trudge your way through a game with Mosaic’s theme, it can be pretty hard. I can’t speak for anyone else, but I, personally need to be in a decent frame of mind to play something like this.

It’s not really a game you can kick back and relax to, which is unfortunate as the sections filled with colour and music do make a nice change of pace and can be quite relaxing at times. Particularly with scenes where the character is floating in the clouds looking at a dazzling sun.

If you have a spare few hours, and aren’t too fussed about a heavy handed approach or being bombarded with negativity, you should give Mosaic a go as it’s an interesting take. I would just hold off until you’re in a good mood before diving in.

While Mosaic is a good game, it’s hard to describe it as enjoyable due to its subject matter. It has the possibility to hit a bit too close home for some, but the overall message once you hit the end might be worth it. It is by no means a bad game, just very heavy handed when it comes to its subject matter.

Among The Sleep Reaches Kickstarter Goal