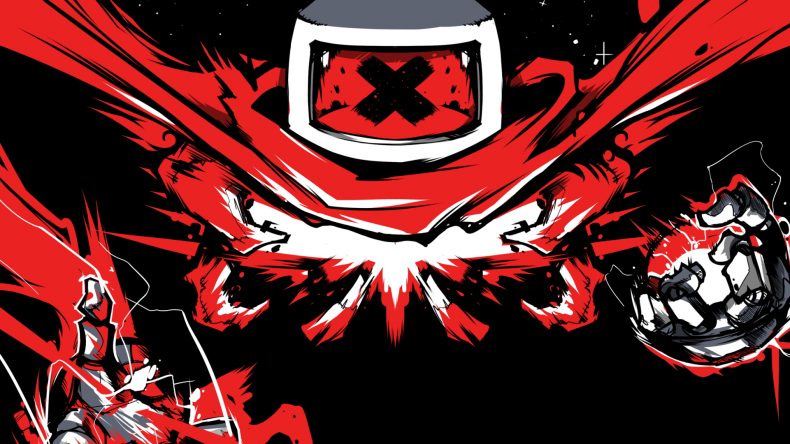 Have you ever played a game and within the opening half hour, realised you were about to witness something special? It’s a rare feeling, but Kunai had that effect on me. From the moment the little robot ninja protagonist breaks out of his tank, a big grinning visage displayed on his face screen (no really, his head is a tablet), I was in love. That love only deepened the more I played.

Kunai is a side-scrolling Metroidvania, complete with gorgeous pixel art visuals and an incredible soundtrack. The world seems to have ended, with humans almost wiped out by an evil AI. Robots now inhabit the ruined world, but some of them are fighting back against the AI, Lemonkus. You play as Tabby (the little robot ninja with the tablet face), who has the soul of a great warrior and a fantastic array of digital expressions. You might be wondering about the game name, but it’s quite simple: Tabby finds a pair of kunai early on, which can be used as grappling hooks to swing and climb around like Spider-Man. This is what sets Kunai apart from other Metroidvania games, as you aren’t too limited in your vertical progression, whereas other games tend to keep you grounded until you eventually discover a double jump or some other movement abilities. Kunai does give you other ways to reach new areas and move around as you progress through the game, but most of the time you’ll be enjoying the delights of swinging around the various environments and battling evil robots along the way.

Tabby finds a rather impressive-looking katana in the opening minutes of Kunai too, which lets you hack and slash your way through most of the game. It even regenerates a portion of your health whenever you kill an enemy with it. But what makes our little tablet-faced friend even cooler, is that he can also deflect bullets with his newfound blade. That never gets old. It isn’t all style over substance, either. Every area is brimming with content, with not a single wasted space, thanks to the wonderful level design. You’ll want to explore, especially when there’s an obstacle you can’t overcome just yet. Being a Metroidvania, you’ll know that Kunai will give you the tools you need to get past the rocks blocking that doorway, or to increase your jumping range to get over chasms when swinging isn’t an option. Each time you get a new toy, not only will you be treated to a cool image of Tabby wielding it, your movement and combat abilities will also change.

This is especially important during the spectacular boss fights. While Kunai is usually a nicely balanced game, with difficulty not really being too big a problem until you come up against these challenges. A couple of them took me a fair few attempts to find their pattern and my rhythm, but they can all be beaten using the tools the game gives you. It feels a little like Hollow Knight in that regard, but without the added worry of losing experience points or progress, upon death. Kunai isn’t a roguelike, roguelite or any other form of rogue, which makes a refreshing change in today’s market. That’s not to say it’s easy (like I said, a couple of bosses took me eight attempts or more) and its checkpointing system can be a problem. Sometimes it’s fine, like when you die to a boss and it usually plonks you back at the beginning of the fight, but other times can see you having to redo entire sections of an area. When that area contains several “instadeath” moments, it can be particularly frustrating when you repeat the same part a few times. What makes it even stranger is that there is no reason for this. You don’t lose any currency or progress, so if you hit the switch at the end of a tough section, you won’t have to go back and hit it again if you die. Very odd design choice.

You can’t fault the design when it comes to its presentation, though. The pixel art is lovely, with an almost Game Boy-like filter which washes out a lot of the main colour, allowing the blues of Tabby and the Resistance characters to shine, as well as highlight the reds of enemy robots. The enemy designs are quite varied too, from the shuffling, zombie-like machines with big CRT heads, to the hornet bots that buzz around just out of reach, before darting downward with their stingers. But it’s the boss designs that really show off the design quality, with each one perfectly suited to its environment, utilising the space and encouraging you to adapt to their movements and patterns. Each boss fight flows beautifully, thanks to both the beautiful animation and the exquisite movement mechanics. Even battling regular enemies can flow just as nicely, especially as you get to grips with the swinging physics and unlock new abilities.

Each weapon comes with upgrades, as does Tabby himself, which can be bought using coins collected from killing enemies. You can only buy these upgrades at wifi routers, which emit a nostalgic buzz that some might recognise. The upgrades available allow you to do things like use kunai to slingshot yourself upward, or simply prevent certain subweapons from knocking you back, but every one will help as you battle your way through the world. On the flip side, speedrunners and streamers will probably get a kick out of finishing the game without buying anything.

One thing I would like to buy, however, is Kunai’s soundtrack. It’s rare that I find myself humming a soundtrack long after switching off a game, but it’s just so fun and it really gets you into each area. Once or twice… actually, dozens of times, I found myself waiting to leave an area until its theme had looped back to the beginning. It even helps to make it feel cooler as you swing around, chaining jumps and attacks in ways at which even Spider-Man would marvel.

I love it when a title like Kunai comes along, flying in under the radar and sweeping you off your feet. Some might consider it a little short, taking me just under six hours to finish, but I only discovered a few of its secrets in that time. Thankfully, it allows you to go back and explore the world after you finish the game, for those of you wanting to go for 100% completion. Kunai offers a fun, fast-paced Metroidvania experience that looks great, sounds incredible and is an absolute joy to play.

Checkpoints can be awkward
Some might consider it a bit short

From the opening moments to the end credits, everything about Kunai just oozes charm and its movement mechanics make it a joy to play. An absolute must-play.