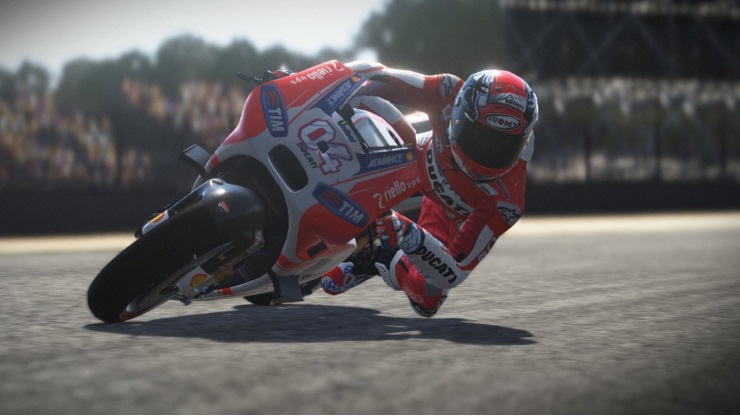 Italian developer Milestone have brought us a slew of capable racers in the last few years, and have been taking care of the MotoGP licence since 2013. MotoGP’s real world riders got going a couple of months back, so fans of speed on 2-wheels will be ripe and ready for the latest iteration of the sport in it’s officially licenced, virtual form. Milestone promise that this is the best Moto sim yet, offering much more than just an updated rider roster.

I will admit that I much prefer my 200mph vehicles to have the sturdiness and control that comes with having four wheels planted firmly on the tarmac. That being said, I have always had an appreciation for the speed, precision and outright danger that comes with racing on two wheels. Don’t get me wrong, you couldn’t pay me to get on the back of one of these things (I’m happy to keep my eyes inside my skull, thank you), but there is obviously a huge amount of skill involved in keeping these super powered death traps upright, a theory I put to the test soon after booting up MotoGP 15 for the first time. You are thrown straight into a tutorial (this can be skipped if you already know your stuff) when first firing up MotoGP, something I was very grateful for. The tutorial is voiced and presented excellently, giving a good grasp of the basics over the course of a few laps. The tutorial turns the driving aides all the way up and all the way down, giving both myself and the game the chace to check each other out. I didn’t do very well, apparently, as once I was done with the tutorial I had everything automatically set to “easy” and the bikes were suddenly a lot easier to handle. I’m not complaining about this, by the way, as it gave me a chance to take baby steps into the world of MotoGP without putting me off immediately with a terrifying wall of difficulty, grazes and trips to visit the St John’s Ambulance team.

Once the tutorial is out of the way you are free to take on any of the games modes on offer. I decided to jump straight into the campaign mode, which I found to be surprisingly deep. You have to start at the bottom, Moto 3, which has much slower bikes than the full fat MotoGP formula I had experienced so far. Going from the monstrous power of the big bikes down to the whiney meander of the Moto 3 bikes is something of a come down, but I found myself winning more races than I lost thanks to the multitude of driving aides, which made my whole experience feel decidedly fake, reigned-in and hollow. About time I turned some of these aides off, I thought – and haven’t won a single race since. I did get an offer from a slightly better team, mind, and I have some sponsors on my bike that even I have heard of, so it’s not all doom and gloom for my fledgling racing career. People familiar to the world of MotoGP will likely tell me that the physics, movement and control of the bikes is jolly realistic. However, I found it to be picky, often random and entirely unforgiving. MotoGP is all about getting your cornering right, just like any motorsport, really, but on these superbikes, the slightest overuse of the throttle can result in the mother of all carpet burns. So the answer, I found, was to be boring: successful, only putting the hammer down when on a straight, and wafting round corners at what feels like nearly-nought with the on-screen rider leaning over at some silly angle with his knee dangling around dangerously. Doing anything else simply results in the smallest amount of oversteer and carpet burn death.

You can, as in all modern racing games, rewind time and amend your tiny error, but often it’s not possible to rewind quite far enough, leaving you stuck in a loop of leather-clad disappointment. Now I know what you’re thinking: many of the problems (if you can call them problems) are undoubtedly down to my skill level, but it doesn’t change the fact that I rarely found myself enjoying the races. I suck at the officially licensed F1 games, but I still love playing them, even when I finish stone dead last. These are bikes doing 200mph – I should be entertained, but it just fails to do that for a lot of the time. Visually, MotoGP strikes gold with its bikes, riders and animations. The bikes and riders themselves glisten in the sun and dance around in the rain – the light engine used here really shines (ahem…). It’s a shame the same cannot be said for the tracks and surroundings, which are devoid of life and character. Of course, being a “sim”, this probably won’t even register as an issue for most. I found the menu system, particularly in the career mode, to be intuitive and easy to navigate, and the use of an on-screen laptop to manage my career is a quick win. The Xbox One build I have been testing has suffered from some frankly show-stopping load times, with it taking a couple of minutes on some occasions just to get into the race and past the dizzying array of pointless motifs, show reels and driver presentations.

MotoGP 2015 is an competent if not exciting entry into the MotoGP series, something I can only really recommend if you’re a fan of the racing formula and are hankering for a title update. As bike racers go this is still your best option, which isn’t necessarily a good thing.

A competent if not thrilling yearly update to the two-wheeled racing franchise, MotoGP fails to deliver the excitement it’s subject matter deserves.