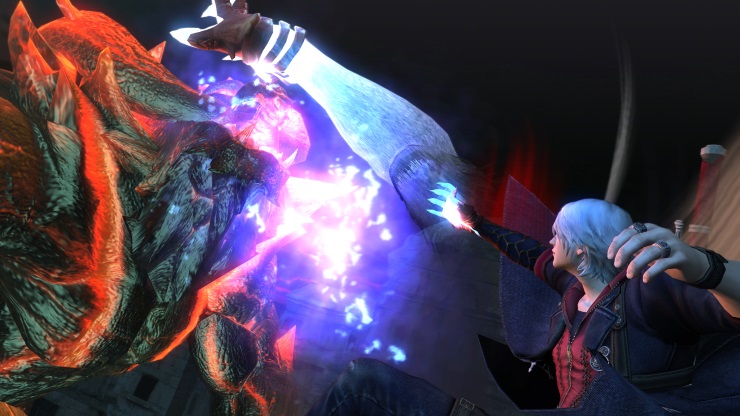 Given the overall calibre of Capcom’s Devil May Cry franchise, you’d think you could just throw the “definitive edition” dart blindly into the pile and dress up whatever you hit for an instant runaway success. Oddly, it seems that’s what Capcom may have done, choosing to re-release Devil May Cry 4 over the superior third game. Or maybe that’s just my preference. Maybe they based it on sales. All I know for sure is that what felt to me like a repetitive, slightly soulless sequel-too-far in 2008 still feels a bit like one now.

That’s not to say that DMC4 is a bad game. It’s not, at all. It’s just that there’s only so much style-over-substance bombast you can take before your aching brain starts longing for something, anything, to actually make sense. One of the many triumphs of Ninja Theory’s controversial reboot was a coherent, well-written and well-delivered story, and revisiting older games in the series makes me wish it had always been so.

The nonsensical plot kicks off with protagonist Nero killing demonic monsters in a gothic city for reasons best-known to (and apparently kept mostly secret by) Capcom themselves. Like Dante and Vergil, Nero is a Nephilim – half-angel, half-human – whose destiny to save the world is all too much like hard work. He seems the sort who’d rather be a cocky asshat than step up to the plate, but gets involved anyway when what passes as plot development starts throwing demons at him for no reason at all. Which is kind of the point of this series. The hardcore fans don’t seem to care much for story, and why would they when the frantic sword and gun-based combat is so immediately satisfying? DMC4’s strength is the brawling – combo-focused and progressively complex, the onus is on juggling enemies and moves to get your style rating as high as possible.

Besides his sword (Red Queen) and pistol (Blue Rose), Nero’s party piece is the Devil Bringer, his corrupted right hand. Pulling distant enemies close or grabbing near enemies and slamming them into the scenery are two of the Devil Bringer’s primary functions, and both add a touch of personal style to his repertoire. Once you start spending Souls to upgrade your moves and weapons, the combat starts to really shine, as you mix ranged and melee attacks together to punish your foes as stylishly as you can.

But here’s where you’ll go one of two ways as a player. You’ll either buy into it wholly, forgetting all other concerns in the pursuit of a perfect SSS-Rank in every stage, or you’ll spend a few hours giggling and smiling at the combat before you suddenly realise you’re a wee bit bored by the whole shebang. The repetitive nature is undeniable, and after the thirtieth or fortieth barrier comes down to impede progress til everything’s dead, some players will struggle to stifle the groan. There’s new variety in the Special Edition in the form of playable characters Trish, Lady and Vergil. The movesets vary, as do their play styles, but the central mechanics remain the same. Sadly, so does the campaign, and you’ll be playing the same areas no matter who you’re controlling. Vergil is probably my favourite, given that he feels the most fluid and lethal. Trish’s cannon packs a meaty punch, but the trade-off is slow movement speed and reduced agility.

Players who’ve already rinsed the original release will be pleased to see the Devil Hunter mode, an extra difficulty level that ups the challenge for veterans and gives you a new reason to obsess over the letter S. It’s really just more of the same but tougher, but that’s probably why you came. One thing Devil Hunter mode does require is genuine skill. While Hard mode is a tricky customer, there are still moments where you can just spam the same few combos to survive. In DH mode, that won’t wash. Button mashing will bring up that Game Over screen pretty quick, and if you want to succeed, the only way is to get good.

Graphically, you won’t notice much difference beyond a smoother frame-rate and some polished textures. The aesthetic overhaul is a slight one, and there’s not much to elevate this above the original. The addition of new costumes is nice, as always, but its purely cosmetic. An unnecessarily shouty, metal-flavoured soundtrack begins to grate pretty quickly, as does the irritating voice-acting. Frustratingly, the one thing that really needed changing has been left alone: the camera is so unfriendly it almost feels like it’s doing it deliberately. In some areas you can move it, but usually it’s fixed in positions that seem custom crafted to piss you off. It makes platforming and using the Devil Bringer to cross gaps unwieldy and often infuriating, and combat in tight spaces can be a real kick in the nephilims. As a result, exploration is sometimes a chore – which is a shame when there’s so much to find.

On the whole, this is a decent enough special edition for people crying out to play this game again, but that’s really it. Non-fans would be better served by the definitive edition of 2013’s DmC than this – although there is enough here to give DMC4’s followers a reason to splash out again. Not essential, but an enjoyable enough romp if you’re not hung up on story and character depth.

Highly repetitive .
Not much visual improvement.
Not much actual substance.

A good special edition of a good game, it's hardly essential, but a definite treat for the fans.